Great White Review: A Change of Pace for the Shark Thriller 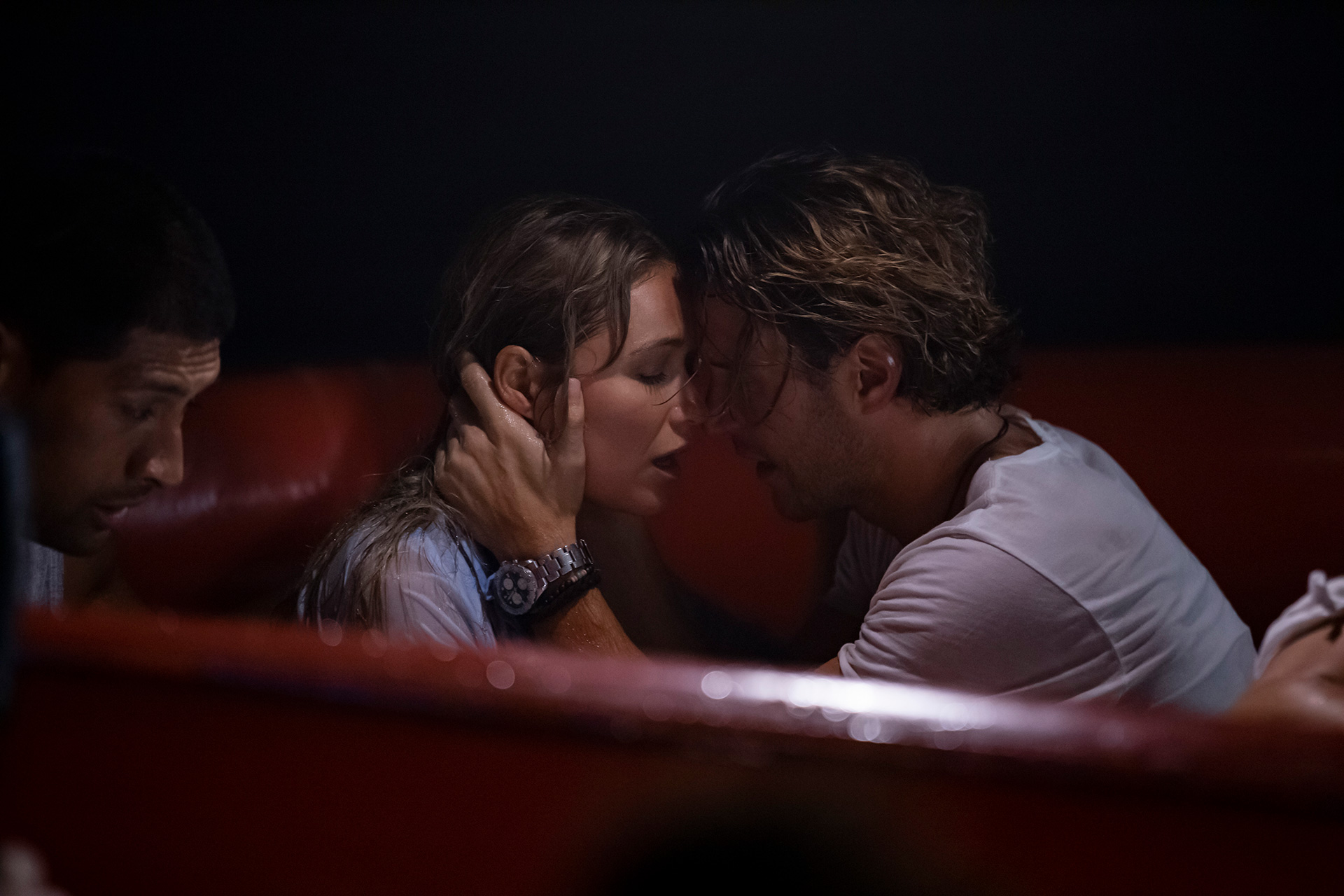 There’s a legend of sorts about a shipwreck on the island locale most tourists ask Charlie (Aaron Jakubenko) and Kaz (Katrina Bowden) to take them off the Australian coast. Only one man survived the ordeal and natives, like the Captain’s cook (Te Kohe Tuhaka’s Benny), have never forgotten his name. It thus means something when the trio’s latest fares (Kimie Tsukakoshi’s Michelle and Tim Kano’s Joji) take out an urn of ashes and a photograph of that very same man. He was her grandfather and always said he wanted his final resting place to be with the men who didn’t make it. Just as his journey back then proved deadly, however, Michelle’s is about to get arduous, too, after stumbling upon a legless cadaver washed ashore.

Director Martin Wilson and screenwriter Michael Boughen’s shark thriller Great White presents its characters with a choice: get back on Charlie’s seaplane and fly to safety while letting the Coast Guard do its job or circle the island themselves to find the deceased man’s boat in case his girlfriend is still alive. Joji is very vocal about voting for option two, but the others will have none of it. They agree to search for 40 minutes (all that their fuel supply will allow minus what’s needed to return home) and make every effort to save this woman’s life. We know the outcome thanks to an efficiently bloody prologue, though: not only will they be too late, but Charlie’s belief that shark season’s over will be proven very wrong.

What follows is about seventy minutes of open water squabbling and fear courtesy a quintet of individuals with varying thresholds on keeping cool heads. Each is, on his or her surface, a cliché to provide drama, but Wilson and Boughen rarely rely on their backstories for anything more than motivation. Kaz being pregnant doesn’t mean she will be insulated. Most of the others don’t even know; it simply drives Charlie’s decisions once the risk gets higher. Joji being a horrible husband (and potential abuser) doesn’t mean he’ll become an easy scapegoat everyone is willing to sacrifice if / when the moment presents itself. It merely allows him to let his temper set some terrible sequences into motion. They each drive the narrative through their influenced actions.

Where some viewers who came to watch dismemberments and outlandish set pieces pitting monster versus man might call that a boring alternative, I found it a refreshing change of pace from the usual exploitative nonsense Hollywood has churned out to feed people’s hunger for Sharknado-esque antics. The shark is but a catalyst here. It lingers in the backs of these characters’ minds and helps push them to the brink of patience and sanity en route to causing their own trouble. And when it does pop up, it has a one-track mind to move in for the kill. So don’t expect too many drawn-out death scenes. If it pounces, its victim is gone—clean, fast, devastating. The emotional cost of surviving each round is in full effect.

That’s the authenticity I need in a scenario like this. More than just a shark stalking its prey—often in ways that are out-of-character for its species—Great White is a survival film with the bonus of a carnivore waiting in the wings. These people have more pressing issues, like a dwindling water supply, fatigue, and over-eager jealousies (Michelle must only smile at Benny to get Joji foaming at the mouth). How do those realities push them too far? How does their humanity force them to jump (or fall) into the water despite knowing what dangers lurk out-of-sight? And how will their impulse to save whoever goes overboard—no matter how much they like them or what they’ve just done—get them into trouble too?

One is afraid of drowning. Another is injured. Charlie already knows what it’s like to get dragged underwater by a shark, live to tell the tale, and experience pangs of PTSD now that the prospect of it happening again is all too real. Their communal psychological potluck becomes their biggest liability until the inevitable climax demands things get a tad outlandish for the sake of drama. You can’t have the five of them paddling with the current for 150 km only to let the long-awaited shoreline be their savior. Some of them will need to eventually confront this beast and it will need to be a tag team effort (at least) for any semblance of believability. Wilson and Boughen check all those boxes.

Is the result new or unique? No. There are pieces from every shark thriller you’ve ever seen thrown in, but that says more about their choice to tackle a well-worn genre conceit than the finished product itself. Great White on its own, however, is very much a success: it takes itself seriously, provides necessary stakes for audiences not to turn such severity into unintentional comedy, and uses logic when it comes to defeating the odds instead of blind luck and explosive theatrics. The acting is good (Jakubenko and Bowden’s relationship feels especially real), the effects are great (moving above and below the waterline to show shark and lifeboat is a nice cinematic touch), and the suspense effectively earned my investment. This film might just surprise you too.