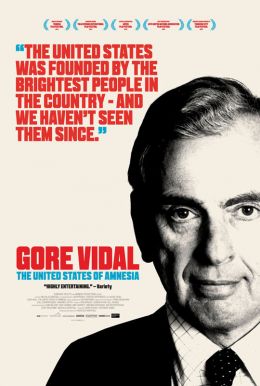 At a recent panel at the Montclair Film Festival, Michael Moore and several filmmakers working within the mode of documentary film discussed the tension between making “cinema” and making a message film. Documentary film has, of course, been supported by TV and Netflix, which has forced it into a certain box. Gore Vidal has lived a cinematic life and his life deserves a documentary that’s a bit more cinematic than Nicholas D. Wrathall’s Gore Vidal: The United States of Amnesia.

A mix of straightforward biography with talking head interviews, the filmmaker also spends some time in the present, following Vidal around to various engagements, including a meeting with Christopher Hitchens, who was once seen as an heir to Vidal’s brand of TV-ready intellectual championing the counter-narrative. Racing through Vidal’s earlier life, we learn he was born into a family serving the country, including father Eugene Luther Vidal, who served as instructor at West Point, where his son came into the world.

Raised in D.C., Vidal served as a page, assisting his grandfather Thomas Gore, a blind state senator from Oklahoma. Vidal, growing up in the center of the action, took the name Gore and at age 21 published his first novel, Williwaw, based upon his military experience. His later work, which included an alternative view of homosexuality and his unapologetic transgendered satire Myra Breckenridge, led literary critics and academics to shun his work. In his later work he’d go on to critique U.S. presidents, including an extensive critique of Ronald Reagan, whom he called a cue card reader. Vidal also strikes up a friendship and is later on screen reunited with Russian Prime Minister Mikail Gorbachev hailing his bravery for admitting that Chernobyl was a frightening event (Reagan, on the other hand, perpetrated the exceptionalism narrative, which may have not been so bold).

Working in multiple mediums, including stage and screen, director Nicholas D. Wrathall certainly has not made the definitive biographical work on Vidal. The problem is where does one begin? Especially as in the process of making the film, both Vidal and Hitchens passed away. One senses watching it that perhaps it was a film unfinished; simulating and entertaining in passages, making a documentary such as this remains perhaps the most challenging. Where does one go with such a life, documented by days and days of TV appearances and interviews? For what it does, perhaps an extensive series of radio interviews on NPR might have been just as effective. A life such as this isn’t easy to adapt and I’m sure this will not be the last biographic documentary with Vidal, which begs the question: why now?

When complimented on the revival of his 1964 play The Best Man, he comments, “isn’t it scary how nothing has changed.” This picture argues history constantly repeats itself without the clutch of a call to action and, like Vidal, it’s not easy to define. Engaging and challenging in moments, it stumbles to the challenge; perhaps the subject deserves a Ken Burns-style mini-series instead of a 90-minute feature documentary.

Gore Vidal: The United States of Amnesia is now in limited released and expanding this weekend.