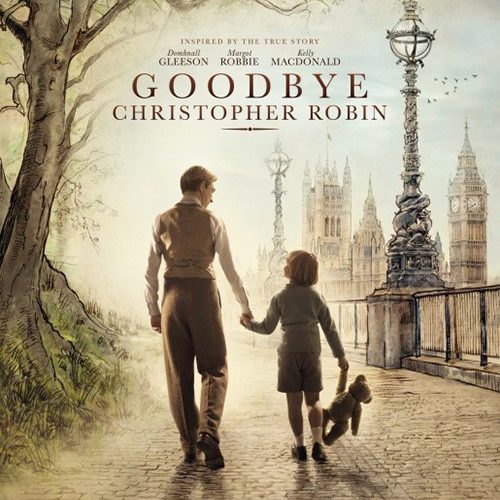 If you’ve always liked Winnie-the-Pooh but wish it overflowed with death undertones and ponderings on the destructive nature of fame, has Simon Curtis made the film for you! In Goodbye Christopher Robin, the director goes behind the story that led British playwright A.A. Milne (Domhnall Gleeson) to begin writing children’s books using his son’s favorite toys as protagonists, and how it altered the little boy’s life forever. When we first meet Milne, he’s a shell-shocked veteran plagued by constant nightmares about his days battling the German Empire in France. Milne can’t fathom the frivolity with which life went on after the war, and never misses a chance to share his opinion with society members, who quietly disapprove of him.

For his socialite wife Daphne (Margot Robbie) this means a life of dullness, which leads her to leave her husband and their child Christopher Robin (Will Tilston) in their home in the Essex woods where she hopes he’ll recover. While Milne broods and fails to start writing, little Christopher is left at the care of his nanny Olive (the always fantastic Kelly Macdonald) who tries filling the role of both parents. Whenever his parents remember Christopher, they devote their attention to him with intensity, we see his mother bring him stuffed animals which she names Winnie, Piglet etc. and voices in tones that are both familiar and strange. Milne, meanwhile begins to find inspiration in his son’s constant adventures in the forest; he builds a little door to hang from a tree where he believes an owl lives, and when he discovers a swarm of bees his first thought isn’t “run away” but “honey!”

When Christopher asks his father to write him a book, he complies, but rather than keeping it for themselves he publishes it. Soon enough Winnie-the-Pooh has become a sensation credited with bringing back happiness to the UK. Christopher Robin is dragged by his parents from press conference to conference. He’s asked to pose with cubs at the zoo, and when his parents pick him up after days of not seeing him, they bring him to a tea party where he’s the prize.

Goodbye Christopher Robin could have easily been a romanticized version of childhood and a celebration of Milne’s work, but instead it chooses to raise questions family films rarely bring up, its moments of darkness at times becoming almost overwhelming. Screenwriters Frank Cottrell-Boyce and Simon Vaughan make suggestions that on their own would’ve made for fascinating films, such as the notion Daphne has that by giving birth to a boy she had given birth to a soldier who would at one point be taken away from her. Is this why she keeps her distance from him? Sadly the film never digs too deeply into situations like these, instead being satisfied with planting the seed and moving on to something flashier.

The film lacks tonal cohesiveness, and it often seems to be wondering if it’s a story about Milne, Daphne or Christopher. It could’ve been about all of them, but it seems to fall for them individually and then abandon them in a heartbeat. Those unfamiliar with Pooh’s origins might find it surprising that such pain could’ve led to the unmitigated joy that has made the property one of the most beloved in history. While the film never sensationalizes the events in the Milne family life, except for a perverse third act twist, it might’ve been better served if it used the melancholy found in the Pooh stories. Rather than going for a greatest hits approach with Tigger’s attention span, the film would’ve been quite magical if it had used Eeyore’s wistfulness as inspiration.