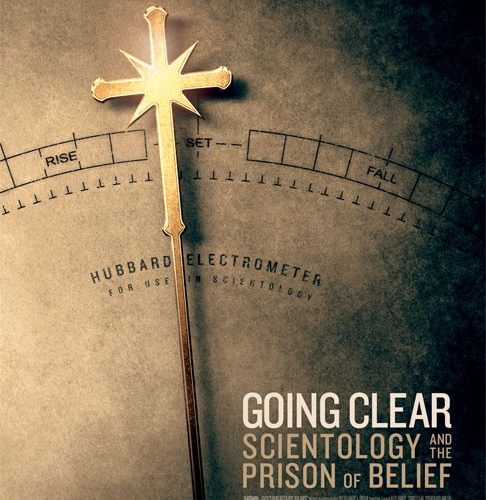 [Review] Going Clear: Scientology and the Prison of Belief

If the bank of trustworthiness requires constant investment, Alex Gibney’s previous work pays dividends in what is his most challenging film to date, Going Clear: Scientology and the Prison of Belief. With a deep filmography that even the Church of Scientology have yet to find a flaw of veracity within, Going Clear is as thoughtful and carefully researched as it can be. To the extent in which this film can be called a hit piece, it’s not for a lack of trying to understand; perhaps the knowledge acquired within the church is difficult to parse out (including its creation myth), but Gibney and company were certainly exhaustive in their investigation. The church’s chairman, David Miscavige, appears in archival materials but declined an interview request, fearing perhaps a Frost/Nixon-style showdown.

The film is a harrowing one, yet incomplete and one-sided, as is the nature of any film in which a secretive organization seeks to control the narrative. To be clear, I have no dog in this fight and a slick documentary does not yield a credible one. The frustrations of a filmmaker attempting to create a picture about an issue or an organization such as this is clear here, as the subject retains some narrative control by simply opting out. While the church’s Freedom Magazine alleges they did reach out to Gibney, the terms of such support are never made clear within its slick (counter) propaganda video.

Gibney’s presence, such as in Finding Fela, is largely absent, apart from a few interviews in which he allows his subjects to tell the story. Unlike The Armstrong Lie, his filmmaking process is left offscreen; perhaps there simply was no room for it here in a two-hour documentary, nor has Gibney ever worked in the style of Nick Bloomfield, documenting the ironic and often ugly sausage-making that is documentary filmmaking. Perhaps a Frederick Wiseman observational picture, free from the restraints of traditional narrative structure may offer the sunlight desperately sought after, although I doubt Miscavige would allow such a filmmaker in without a guarantee of controlling the narrative. Hiding behind their right to religious freedom and perhaps their leverage — including financial support and the symbiotic relationships they maintain with A-list celebrities — the alleged human rights abuses are buried or dismissed in scripted narratives. We learn that author Lawrence Wright, the man behind the film’s source material, started his book with the desire to simply understand the Church of Scientology. Going Clear is an effective film, mixing stock footage and piecing together a historical picture of the church’s foundation, which is rooted in Dianetics, a form of physiological treatment to its organization as a formal religion. That distinction came as a result of a war between the church and the IRS that got particularly ugly, employing Freedom Magazine and individual church members to launch a proxy war, suing individual IRS auditors. After they win this battle, erasing the church’s mounting tax bill, they stage an lavish event with production design that would make Leni Riefenstahl jealous.

Although discredited by the church, who has a long standing practice using records from auditing sessions against its subversives, Gibney turns to sources to flesh out Wright’s assertions. These include one-time John Travolta contact Spanky Taylor, a former member of the Sea Organization who was placed into slavery, and Marty Rathbun, a former henchman for Miscavige. Also included in the narrative is former practitioner and outspoken critic Paul Haggis, who attempts to explain the creation myth of the church along with actor Jason Beghe in a particularly hilarious sequence.

To his credit, Gibney has played this straight as he acknowledges denials to certain narratives issued by the lawyers of high-profile members such as Tom Cruise and Travolta, who decline to appear before the director’s lens. What emerges is a haunting portrait of ego, power and money: a profile from afar of Miscavige, whose behavior on camera in produced propaganda appears as self-serving as that of mainstream televangelist, Joel Osteen. Corroborated by defectors off-camera is a violent megalomaniac who will stop at nothing to silence the critics of the church while perpetuating an pay-for-play style “religion.”

The immediate, visceral impact of the content aside, Going Clear at the very least launches an effective discussion of religion. All religions face a certain danger when the line between human dignity and common sense is blurred, and all are guilty of sins against their detractors from fatwas to inquisitions. Here is a powerful organization with the money, influence and celebrity to imprison its most vulnerable Sea Org members via its cruel RPF (Rehabilitation Project Force). A filmmaker with multiple interests, including sports, money, politics, culture and religion, Gibney has made a strong film. Although it lacks the precise focus of his chilling Mea Maxima Culpa: Silence in the House of God, it’s nonetheless a powerful experience aiming to demystify the organization and its leader.

Going Clear: Scientology and the Prison of Belief will play on HBO starting March 29th.