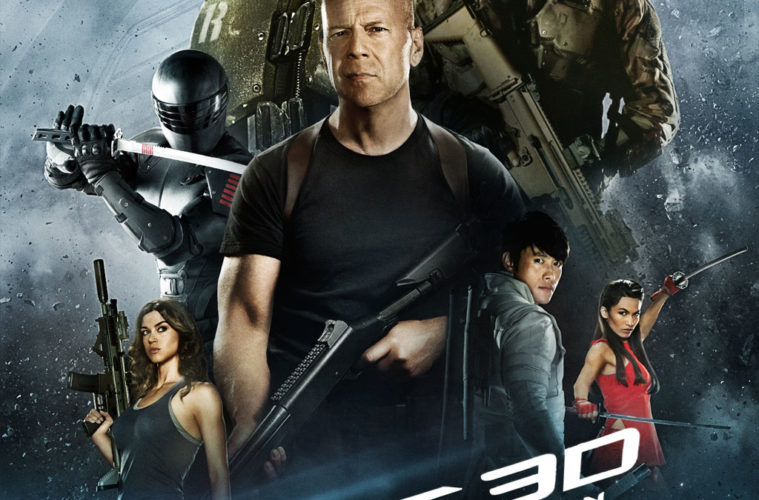 There’s a bravado throughout G.I. Joe: Retaliation that never quite rings true. As much as they talk it up, it’s more of a rooster’s plumage than reality. “Roar! I pound my chest and fire machine guns,” it says early and often. Yet we know these warriors are based on cartoon characters, and as much as it wants to be taken seriously, it’s hard to wrap one’s head around the silliness of it all. Despite this, the most surprising aspect of the film is the script’s overt flaws. Written by Rhett Reese and Paul Wernick, the duo responsible for the lovable gem Zombieland, one expects there to be a certain cleverness to the proceedings. Instead we are treated to some of the cheesiest plot devices and internal rules that you may witness within a big-budget action film. No small feat.

Let’s also add some clarification. Director Jon M. Chu‘s first foray into the summer blockbuster realm was set for last year with a June 29th, 2012 release. Suddenly, and without any forewarning, Paramount announced the delay of the film in May for what it claimed was 3D post-conversion. Since the Avatar effect in 2009, post-converting major studio tentpole films isn’t uncommon, but to move the date back nine months after expensive ads during the Super Bowl and the production of millions of Hasbro toys — many of which had already made their way onto shelves — only a month from release is very rare. There was a wave of speculation about why and it was commonly reported that the reasoning was for 3D post-conversion, in addition to the fact that test audiences were clamoring for more of Duke, a role played by the suddenly box office-hot Channing Tatum, and the studio was looking to do reshoots to give them exactly that. Turns out that was just a myth, as Chu has since revealed that no reshoots took place following the delay. Apparently it took all of that simply to get the 3D ready, and the results are paltry. The highlight of the film with the 3D conversion surely should be a high-flying sequence where ninjas battle from belays off the side of a mountain, but I was left unimpressed. On paper, the idea is truly spectacular, but the execution leaves one wanting more. Instead, the highlight here is the robotic firefly sequences and the showdown between Storm Shadow (Lee Byung-hun) and Snake Eyes (Ray Park), where throwing stars are blasted out of the air by bullets. Another major issue is the continual insistence on giving us quick edits of the zoomed-in action choreography. Particularly with the hand-to-hand combat sequences, one can easily lose track of the spatial orientation. Chu rapidly jumps from Roadblock’s (Dwayne Johnson) POV as he fights Firefly (Ray Stevenson) in a climactic battle, to a side angle, then to an angle from behind Roadblock, then behind Firefly. Again and again we change orientation, leaving one dizzy and disengaged from the events on screen. Perhaps the choreography was something to behold, but the end result is so choppy and hectic it devolves into a complete mess. This isn’t an exclusive flaw to Retaliation, as major blockbuster action films have latched onto this herky-jerky execution, but one would expect scenes with Johnson and his extensive wrestling background in the WWE to make use of his physicality in full glory. One comical aspect of the film is that after we see Roadblock giving a speech to the G.I. Joes, in all his hoorah bravado, they are dropped into a shootout to secure nuclear arms and gunfire erupts in muted bursts. For a film that is supposed to be loud and proud, you’d expect the gunfire to register as something meaty. Instead, the guns are barely louder than the surrounding sonic environment. Shortly after securing the nuclear payload, the Joes are ambushed and left for dead by Zartan posing as the President of the United States (Jonathan Pryce), leaving just Lady Jaye (Adrianne Palicki), Flint (D.J. Cotrona), and Roadblock to fend for themselves with Snake Eyes missing in action.

Chu cut his directing teeth on 3D films with Step Up 3D and Justin Bieber: Never Say Never, and he has claimed that he brought his attention to depth to this film, even before they decided to post-convert it. Unfortunately, this involves sequences such as a boardroom meeting with the camera moving from behind one shoulder to another, and things constantly obstructing a portion of the screen by being blurred in the foreground, while we are in focus in the background. Despite some nauseating sections, there are some clever ideas at play. Walton Goggins has a perfect pop-culture reference when he mentions fantasy sports teams, and Flint’s gymnastics in the opening nuclear payload sequence are some of the few highlights. Despite Roadblock’s Fast and the Furious-esque tank vehicle and a nice payoff for the backstory of Lady Jaye, one disappointing aspect is the lack of any great music in the film. Curiously, though Chu (or at least Paramount) utilized great music in the trailers for the film, there isn’t a single sequence in the film that contains a memorable music moment. Another failing is that the tone so earnestly wants to be dark — destroying London in the process — but never succeeds, because it’s too busy being silly before getting serious. There’s also use of some veterans in the film that resembles Battleship, another Hasbro Studio film from last summer. Whether that is coincidence or not, Battleship gets credit for the better utilization where the veterans are featured prominently and in important roles whereas here they are relegated to background.

Not everything about Retaliation is bad, but the aforementioned aspects weigh the film down and keep it from ever finding a rhythm. Even if one accepts some suspension of disbelief, as sheer popcorn entertainment, this stands as fairly flat. With far too much talent in front of and behind the camera, it’s disappointing for this to turn out as anything less than fun. G.I. Joe: Retaliation wants to be taken seriously, attempts to be fun, and tries at darkness, but in the end it is a forgettable headache.