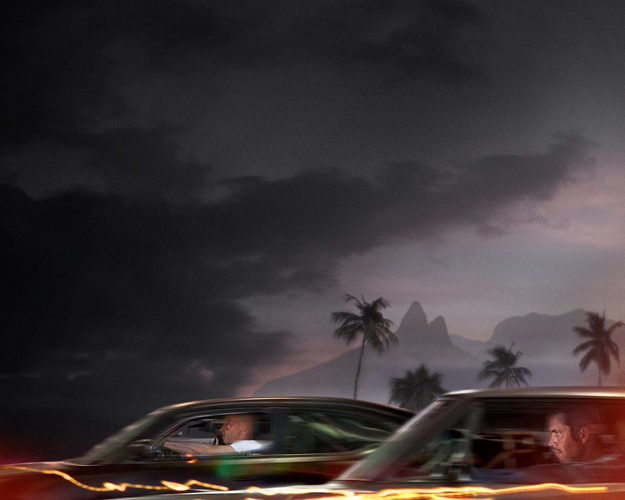 Clocking in around 25 minutes longer than the previous Fast and Furious films, director Justin Lin has created the definitive entry into the series with Fast Five. It’s difficult to imagine something funnier, dumber and more action-packed coming from this group. Nearly every element is packaged to deliver the highest “cool” factor possible, including the subtitles. Although I’ve never fully connected with a Fast and Furious film, this departure in structure and increase in pure blockbuster entertainment makes Fast Five a great kick start to the summer season.

The story is simple, picking right off from where Fast & Furious left off. Dominic Toretto (Vin Diesel) was sentenced to 25-to-life and is en-route to federal prison. Brian O’Conner (Paul Walker), who is still practicing a life of crime after leaving behind his federal agent job, is with his lover and Dom’s sister Mia (Jordana Brewster). They lead a rescue operation in a quick, ultra-ridiculous fashion, leaving a mangled bus and ZERO casualties. They are just that good at what they do. Fast forward to Rio and our team is involved in some slick carjacking from a moving train. This is the sequence where Lin’s action directing prowess first shines through. He knows how to actually build and correctly frame an action sequence, seemingly a rare skill in Hollywood. There are long shots when called for (specially cars getting transferred and speeding away) and quick cuts when the action ramps up, leading to the tease found in the trailer, in which Walker and Diesel jump to their impending doom.

Fear not, they survive and hatch a plan to steal $100 million from Rio’s drug kingpin Reyes, played by Joaquim de Almedia. They assemble a team of familiar faces including Tyrese Gibson, Ludacris, Sung Kang, Gal Gadot, Tego Calderon and Don Omar, all coming from different Furious films. And this is when Lin and screenwriter Chris Morgan smartly change up the direction for this franchise.

Coming from someone who doesn’t know the difference between an Audi and a Viper (I hope I didn’t make those up), let alone can change his oil without assistance, it was refreshing to see the lack of CGI-induced street races with little stakes. Lin has instead created a heist movie. This doesn’t have the craft of Rififi by the way of Jules Dassin, nor the charm of Steve Soderbergh‘s Oceans films, but Lin is going for Michael Bay sensibilities here. Thankfully, he tones the bloat and idiocy down to a minimum, compared to that popcorn director. Yes, the film is stupid, but it always remains fun, and it does near two and half hours, but it flies by. The romantic subplot with Diesel and an FBI agent played by Elsa Pataky does drag, but that’s only because there is a much more engaging relationship at hand. Aside from Jason Statham, there are only a few true action stars left in Hollywood. Universal already has one of them in their franchise and now they’ve acquired the missing piece. Dwayne “The Rock” Johnson plays Diesel’s perpetually sweaty foe, FBI agent Hobbs. It is the ultimate homoerotic match-up that has graced the screen in quite some time, a feat The Expendables could only dream of. Even their meet cute is something to be admired, a face-to-face thrown-down of unfiltered masculinity.

Their first encounter occurs during a rousing favela rooftop chase. If you’ve seen City of God or the Elite Squad films, then you know the gang vs. police battle found in these areas. Lin & Morgan add our Fast Five gang in the mix, creating a triangle of violence as each group is evading and/or killing the other. It’s glossier than those crime films mentioned, but it is a welcome alternate to a street race. Lin even toys with the audience in a later scene, completely skipping over one of these street races and simply showing the winnings.

It is the final 30 minutes that legitimately raises my excitement for the prospect of Fast Six. Lin creates an extraordinary action sequence around the bank heist. It’s coherent, thrilling, and full of twists and turns. Specific long shots of the camera focusing on the oncoming getaway cars, then tracking to the bank vault they are carrying, then moving to the legion of following police cars create a perfection sense of location. When so many directors are bound to get this wrong in a summer filled with one action blockbuster after another, it’s refreshing to see a film start out on the right foot.