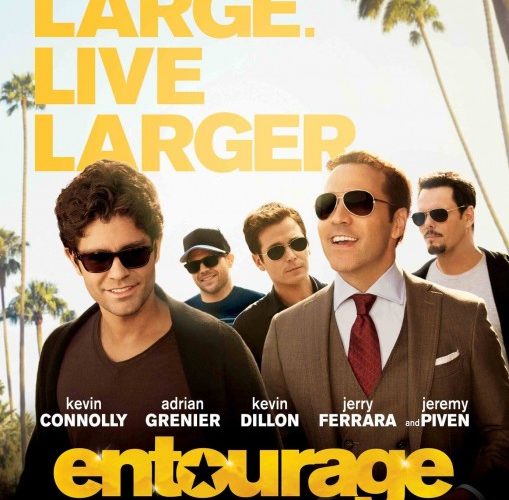 I was a big fan of Entourage, loving the first four seasons and remaining entertained until the end. The fact Doug Ellin received backing for eight seasons is a success story in itself because you can only recycle the same story beats so often before the audience loses interest. Who cares if the movie Vinny Chase (Adrian Grenier) makes off-screen gets bigger or his role in its creation expands, ultimately he and his crew will laugh off the hate, find new girls, and move to the next opportunity. The real appeal hinged on the off-the-wall crazy Hollywood satire surrounding that stalwart MacGuffin. We watched to witness “Drama” (Kevin Dillon) play the fool, “Turtle” (Jerry Ferrara) work hard, “E” (Kevin Connolly) over-commit, and Ari (Jeremy Piven) explode in profanity-laced rants. Attempting more with a feature film would have been disingenuous. Where the status quo assures success in the eyes of those already in love with the series, it does no favors for those hoping to see a good movie. If I were completely objective I’d be hard-pressed to genuinely recommend Entourage alone. You can walk into it knowing nothing thanks to a deftly woven summation courtesy of a Piers Morgan interview at the start, but it’s no longer 2003. Seeing these guys for the first time today only shows them as selfish rich kids willing to take a bullet for the guy next to them but not us as the ticket paying public. You need the history—or at least a few episodes to know where this quintet of privileged misfits is coming from—to understand they don’t quite have silver spoons. They can earn endearment with time.

The thing about cinematic continuations from the small screen is that objectivity means nothing. Ellin and lead producer Mark Wahlberg have pushed so hard for so long because they wanted to give their fans more of the characters they grew to love for almost a decade. Of course they want newcomers, but the hope for box office legs doesn’t finance Entourage. Its greenlight is tied to the knowledge that there’s built-in appeal. Step One must be ensuring you never alienate your core. And to their credit they’ve fulfilled this goal and possibly even improved upon their template by showing how easily a full season arc can condense into 100 minutes and still be as riotous and debauched. We crave the public drama of Hollywood excess and this was always reality TV without the guilt from laughing at real people. Four years ago we left the boys as they boarded a plane to Paris for Vinny’s marriage. E was back with a pregnant Sloan (Emmanuelle Chriqui), Turtle was a newfound millionaire, Ari had quit his agency to make-up with his wife (Perrey Reeves), and Drama was Drama. While overflowing with sentimentality and happy results, it was kind of a perfect way to wrap up their shenanigans and show how they may have actually grown up. Now that it’s no longer the end, however, it all must be dismantled so chaos can reign and comedy can prevail. And what’s Entourage without a free and clear Vinny Chase to woo the women and make his big bro jealous? So you write-off Alice Eve, find a new script, promote the movie star to the director’s chair, and go to work.

This means that the film opens a tad more than a week after the series ended. The potential of Hyde as a starring vehicle for the hopeful director arrives quickly and we flash forward eight months without having to wait that long for a new season to begin. Did Vinny defy the odds and create a great film? That’s what we will discover alongside the father and son team of Texan financiers (Billy Bob Thornton and Haley Joel Osment‘s Larsen and Travis McCredle) footing the bill. Throw in a girl (Emily Ratajkowski as herself), the threat of everyone getting fired, and E’s out-of-wedlock baby’s looming birth and you receive the powder-keg of nonsense necessary to sit back and laugh at the antics of those with way too much for us to shed any tears when all goes wrong. Whereas the fan service of a Veronica Mars could be satisfied as it delivered a fully formed mystery, Entourage is a different property altogether where story purposefully takes a back seat to characters. Ellin stays true to this formula by keeping the plot as simple as whether or not Vinny will be able to finish his film. Does it matter in the grand scheme of things? No. As long as Rex Lee‘s Lloyd pops in and callback cameos from Bob Saget, Gary Busey, Rhys Coiro, Andrew Dice Clay, and the jailbird I hoped would make an appearance say hello, we’re happy. To outsiders they’re just more “that guy” moments to accompany a slew of guest stars mocking celebrity temperaments like Armie Hammer, Tip ‘T.I.’ Harris, and Kelsey Grammer. To us they are key to revisiting this hyper-real world.

There are too many cameos—Common doesn’t even get lines despite Warren Buffett receiving a conversation—and the Golden Globes conclusion is schmaltzier than the series finale, but I’m happy to have had the opportunity to take another ride down Sunset Blvd with the guys regardless. Lessons aren’t learned and no one but Piven’s Ari finds emotional growth (as if he’ll let it linger for longer than a week), but it wouldn’t be Entourage if they had. The core actors pick up right where they left off and do their roles justice on a bigger budget affording more locales and bare breasts. Osment provides a fun buffoon to hate, Ari’s ego steals the show, and Vinny keeps on smiling. They deliver on their promise to fans, but it’s time to stop. Another installment will officially be too much.