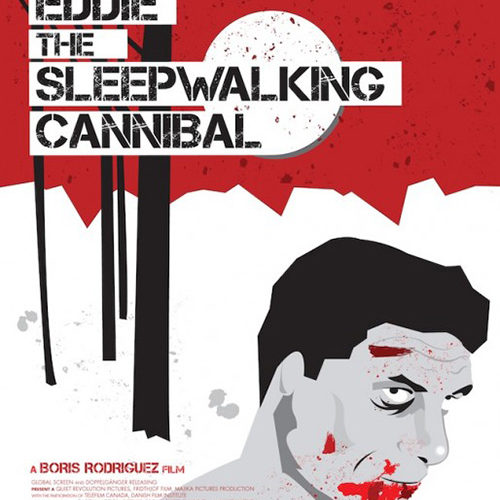 The horror genre has become pretty crowded the last few years with way too many remakes and sequels that never live up to the originality of vision or socio-political commentary that made revisiting such properties appealing in the first place. But while studios try to ratchet up the gore to fill the seats by duping audiences into believing blood equals scares, there do exist filmmakers outside the system trying to carve their own path into the genre with inventive premises and a dash of humor. Writer/director Boris Rodriguez looks to join their ranks with his pitch black comedy horror Eddie the Sleepwalking Cannibal (shortened to Eddie for release). The idea is inspired, the execution entertaining, and the psychological depth of those around the titular maniac deep enough to forgive the killer’s own rather shallow origins. While Eddie (Dylan Smith) gets his name on the marquee, the real subject of the film is painter Lars Olafson (Thure Lindhardt). Stuck in a rut that has now spanned a decade without a canvas worth speaking about, Lars has resigned himself to teaching at a small private school in Koda Lake, Canada. Hired by Harry (Alain Goulem) to be the institution’s savior once a bit of country air hopefully provides inspiration, career revitalization is the farthest thing from the newcomer’s mind. Lars merely wants to try something new and put his struggles behind him—the only reason there’s even paint at his new home is due to his agent Ronny’s (Stephen McHattie) insistent pestering. But all that soon changes when he agrees to take Eddie’s mute school mascot under his wing.

Eddie is a grown man who has been allowed unfettered access to the art establishment courtesy of his aunt being its major benefactor. With her passing, however, the only way to keep money flowing in is to ensure her nephew is provided for. Lars takes a shine to his childlike demeanor and crude grade school paintings, but the real reason he accepts becoming the troubled soul’s caretaker is to score points with fellow teacher Lesley (Georgina Reilly) and fool himself into believing his sole goal in Koda Lake really is to become a resident willing to do anything for his new vocational path. It’s only after awakening their first morning together to find Eddie outside in the cold with blood on his face and a rabbit carcass at his feet that motivations shift. Seeing the ripped flesh rekindles a passion to create again—to put the feelings stirred by the carnage onto canvas. While the result isn’t quite as effective as he’d like, Eddie’s escapades the next night prove a tad more inspirational with it being a ripped apart human that Lars must clean up so as to not tip off local police and watch his unwittingly murderous muse taken away. Without Eddie there will be no school and without the school there’s no Lesley to woo, so the only reasonable thing to do is sell his new work, donate the money, and protect his ward in a way that keeps the blood flowing while also assuaging his conscience in the process. If Eddie can be steered into killing only bad people, what’s the harm?

Rodriguez’s screenplay—molded from a story by Jonathan Rannells—continues in this manner until Eddie’s comfort level with Lars reaches a point where he sleeps through the night. Conflicted on whether or not to accept this new kinship and retire his art forever or find a way to poke the bear into restarting his cannibalistic urges, it’s no surprise that Lars is discovered to be the real monster. Actions escalate out of control as feelings get hurt, desire increases, and local Sheriff Verner (Paul Braunstein) seeks evidence to figure out what’s happening. The situational comedy holds up throughout with only a couple of slow moments, but the fun of watching what happens when Eddie is unleashed unchecked upon the town is worth any lulls from the focus shifting towards Lars’ growing instability. The effects work is believable whether Smith’s blood-soaked body or the decapitations of screaming victims running around with chunks taken from their necks and the performances fit well inside the dueling genres. Reilly plays the skeptic turned love interest fawning over the famous stranger with aplomb; Goulem is sheepishly neurotic enough to accept where his character is taken; and McHattie is evil and conniving like expected. Braunstein delights as the disinterested in excuses law man puffing out his chest while throwing sarcastic barbs and Smith sweetly endears as the lovable monster who can’t help himself. As the chaos ensnares them all, however, it’s Lindhardt’s Lars who we must believe implicitly as the selfish, tortured genius at the center. The results may get muddled when tonal shifts are forced, but Eddie nonetheless entertains with enough originality to forgive its otherwise familiar tropes.

Eddie the Sleepwalking Cannibal is available on VOD starting today.