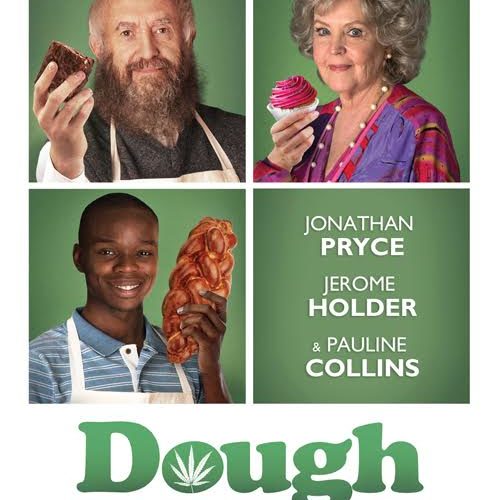 Think of John Goldschmidt‘s latest film Dough (his first in the director’s chair since 1987) as a cinematic peace pipe for race relations and religious zealots. Rather than tobacco and herbs mixed into kinnikinnick for a clay vessel, however, screenwriters Jonathan Benson and Jez Freedman use marijuana and challah. The concoction sells through the roof, has London’s East End overrun by patrons like never before, and gets its unwitting purveyor remembering what it’s like to live. Just when Jewish baker Nat Dayan (Jonathan Pryce) thought things couldn’t get worse—his sole employee was leaving to work for the conglomerate threatening to shut him down after almost seventy years—along comes a young Muslim boy with aspirations to sell drugs named Ayyash (Jerome Holder) to help ease everyone’s pain.

I’ll admit I wasn’t sure where they would take the plot considering its gooey-center of traditional religious adversaries working together can only go so far, but the filmmakers never stop providing new situations with which their characters can have some fun. Eventually Ayyash’s supplier Victor (Ian Hart) has to discover he’s been cheated somehow and despicable businessman Sam Cotton (Philip Davis) must get wind of the why of Dayan’s shop’s inexplicable renaissance, so the whole does find itself playing to those ends a bit. But the story doesn’t just stop or brush things under the rug as though Benson and Freedman painted themselves in a corner. Instead they create tension and stakes—as well as a heist—to retain our interest and tie things in a bow.

Seemingly innocuous details become relevant but never manipulative. There’s a reason Ayyash’s mother Safa (Natasha Gordon) has office cleaning as one of many occupations on her résumé and for Nat to possess boxing trophies on his mantle, but neither proves a glaringly out-of-place revelation in the context of the story. These are simply attributes they call their own despite not letting them define who they are. It’s tough to even focus on them when the characters have so much else going on that earns our attention instead—namely the color of their skin, the age on their birth certificates, and the God to which they pray. But as Nat says, “Times are tough.” At a certain point you have to look past differences and see humanity. Help is help.

Frankly, Nat needs exactly that and he can’t afford to be choosy. His son decided to become a lawyer rather than follow in the Dayan & Son bakery tradition. He’s too old to do it all himself and the financial climate is one where finding assistance means providing more than loyalty. The fact Nat needs an apprentice rather than employee also hurts his curb appeal because that’s a responsibility people in this day and age simply don’t want to embrace. Lucky for him Ayyash can’t afford to be picky either. He must procure a job to help his mother move out of a slum apartment. The boy hopes dealing drugs can do it, but Victor isn’t stupid. He doesn’t want his foot soldiers spending money without legal income. So it’s a match made in Heaven. Nat gets his apprentice—one who genuinely learns to cultivate an interest in the vocation—and Ayyash receives his “cover job.” What the latter didn’t initially think, however, was that he could use the bakery as his corner. Selling weed at the counter means he won’t lose dealing hours by working for real and Nat receives new customers in the exchange. The scenario allows for fantastic comedy too since the elder baker is unaware of what Ayyash is doing and proves absolutely clueless when stoners arrive to buy bagels with “extra poppy seeds.” Things change when the doorbell rings at the hands of two cops and Ayyash drops his stash in the challah mix. Suddenly the whole neighborhood gets the munchies.

Talk about a situation ripe for laughs. It is. Nat’s landlady Joanna (Pauline Collins) starts having the most fun Bridge games ever, his best friend Saul (Andy de la Tour) stops feeling his arthritis, and dinner with his son Stephen (Daniel Caltagirone) becomes a joy when it used to spiral into feelings of inadequacy on both men’s parts, father and son. But beyond the comedy is also a poignant commentary on prejudices. The screenwriters pull no punches with humor (“Don’t Jews bake with blood?”) or anger (“I knew I couldn’t trust you people”). The dynamic between Nat and Ayyash is strained at first, but they warm up to each other. When business booms they become like family. And when the truth is revealed, betrayal emotionally reignites their discrimination. A bond has formed, though, one that can’t be broken no matter how hot blood boils. The fallout is astronomical and both men find themselves at risk of jail time, but solving the issue is something they can only do together. I breathed a sigh of relief when the stakes rose to really put their backs against the wall because watching them illegally drug senior citizens without their knowledge only to receive giggles and smiles in return becomes discomforting. The way around it may be more outlandish than the premise itself, but it’s effective as a result of its similarly satirical tone. Things get serious and tears are shed; sometimes laughter helps and others it’s nowhere in sight. And all the while Nat and Ayyash come alive.

For once in the boy’s life he’s found a friend and champion outside the home he fled for safety. This isn’t something to disregard or treat as an afterthought in a kosher pot movie. The same goes for Nat who never wanted anything but the thrill of seeing his son grow into a man by his side. Pryce and Holder are perfectly suited to the roles and form an authentic chemistry that excels above workplace formalities. They open each other’s hearts and minds while not being completely selfless or honest (albeit Ayyash’s transgressions are much worse). Dough is about finding common ground while seeing skin color and religion as meaningless in the face of compassion and humility. Marijuana may help their thaw, but their kinship runs much deeper.