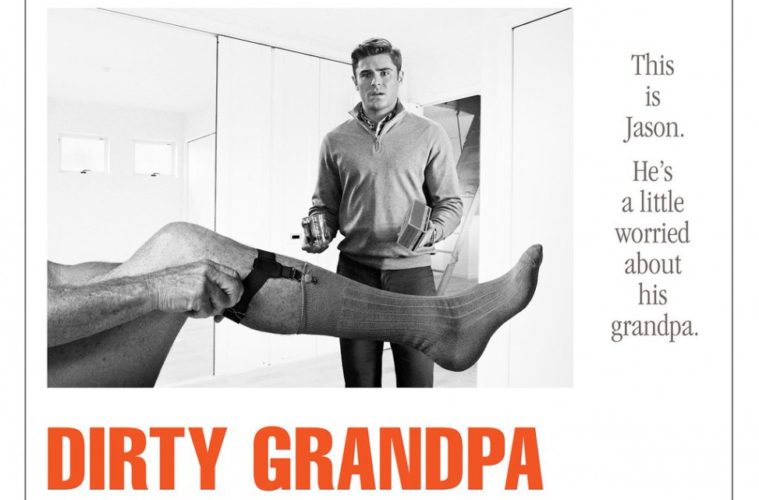 When it works, it works — and, more often than not, Dirty Grandpa lands big, sometimes awkward laughs. While more Todd Phillips than Solondz, director Dan Mazer infuses the film with an uncomfortable sense of irony right up until its post-credit gag, which perhaps proves the shelf-life of a fetish might be longer than just a temporary phase. Those seeking the meaning of life ought to look elsewhere. The formula is familiar, while Zac Efron and Robert De Niro make an unexpectedly funny duo, with De Niro delivering zingers that would be inappropriate to mention on a site such as this.

Efron plays Jason, a recent law-school grad marrying the uptight Meredith (Julianne Hough) with the approval of his equally uptight father, David (Dermot Mulroney). After his grandmother passes, his grandfather, Dick (DeNiro), begs his grandson to take him across state-lines to his condo in Boca Raton. Against, of course, the wishes of Meredith, the kind of white bread politician’s wife in the making, Jason agrees to go, but — one of many catches — he can’t take the SUV. He has to take her pink convertible.

Dick transitions from the sweet, endearing old man into a horny man on a mission when he meets his match at random — Lenore, with Aubrey Plaza playing a parody of a sex-crazed college senior on the mission to complete a trifecta: student, alumni, professor — and she mistakenly thinks Dick is a professor. Lenore is a disturbed young women, and Plaza tests boundaries of decency as she confesses she lost her virginity at a Bingo hall and has a thing for older men. Cringe-inducing at times (Plaza’s speciality), the film commits to the gag as Lenore and Dick commit to hook up.

Along the way, Jason has an epiphany (after trying crack for the first time), falling for a member of Lenore’s posse, Shadia (Zoey Deutch), also his former lab partner in photography class. Even corporate lawyers once had dreams — so of course Jason’s perfect life is about to be shattered. The film progresses through a series of spring-break rivalries, parties, arrests, and encounters with a friendly local drug dealer in Daytona who will accidentally feed you crack.

The thing about Dirty Grandpa is many of the laughs are just plain wrong, testing the boundaries of jokes about child molestation and Lenore’s daddy complex, coupled with a genuine parody of whiteness on occasion. Mazer is fully in control of this opus of madness — perhaps it takes an outsider (in this case a Brit) to make fun of white representation in cinema. When Shadia tells Jason he looks like Mitt Romney, he commits the ultimate party fowl of asking “who let the dogs out” at a party — a nod to Romney’s uncomfortable photo-op with a group of black youth. Yet the film really is, in the end, overwhelmingly about dick and drug jokes — several land and, against my better judgement, I confess I laughed, and hard.

Dirty Grandpa has a little more under the hood than your average stoner road trip sex comedy — testing the bounds of good and bad taste even as it reverts back to failure tropes of the genre. Still, it takes a few risks, even those that don’t work; it’s as creepy as its name suggests, sexist, and dirty-minded, but it delivers what it promises and commits. In the cinematic wasteland of January, Dirty Grandpa is a minor bright spot: perverse and subversive, if not somewhat predictable.