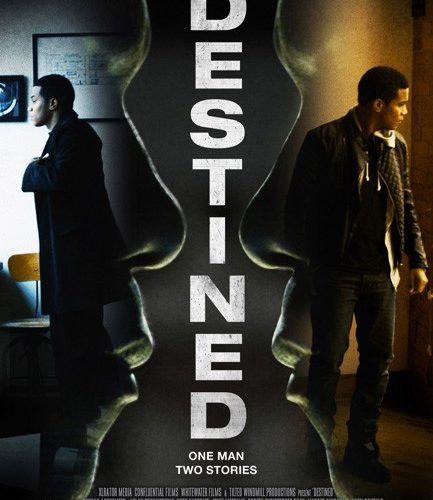 A young boy residing in the Brewster projects of Detroit follows his friend to a stash house unaware that the consequences of this moment will shape the rest of his life. He’s coerced into dealing as a means for survival—the only way to convince his friend’s bosses that he isn’t a snitch being to actually engage in the activities he would be snitching on. So he ignores another friend just trying to say hello, his fear towards talking to her while “working” too much to utter a single word. A car pulls up, he walks over, and chaos commences. Off he runs with two grown men in pursuit. Either he avoids a speeding car by falling (and getting caught) or he diverts trajectory and keeps going.

Instead of choosing one outcome to follow, writer/director Qasim Basir brings both to life. One fork leads this boy on a path towards becoming Sheed (Cory Hardrict), a local drug lord who’s worked his way to “owning” those projects via the slang definition of the term. The other sees him grow into Rasheed (Hardrict again), a budding architect with the skills and perseverance necessary to ascend the corporate ladder. Did getting caught turn him into a full-fledged criminal or did it wake him up to change his future? Did escaping reveal his wealth of luck to evolve on the streets or did he never stop running until setting foot in college and subsequently his career? We’ll never discover the answer because all four possibilities ultimately prove equally viable.

The result is Destined, a film as much about showing audiences our similarities beneath nature/nurture as it is the guilt and regret we carry everyday due to compromises we only acknowledge are wrong in hindsight. Basir isn’t interested in pretending as though that moment in Rasheed’s youth fractured him or that whatever follows is just a split second “what if” scenario for him to choose. We don’t reach the end only to go back to the beginning and both versions of this character don’t suddenly merge into one. Throw any expectation of high concept fantasy out the window because they do a disservice to the message. These paths are shown concurrently solely as a means to express the complexity and unpredictability of both the “right” and “wrong” choice.

It’s not just Rasheed, though. Everyone else has also changed whether as a direct result of who he becomes or the decisions they themselves made regardless. Dylan Holder (Jesse Metcalfe) is a cop looking to take Sheed and his operation down as well as an architect with a chip on his shoulder who questions Rasheed’s abilities at the same time as questioning why he does so. (It’s fun to see him as the boy in the car that sends Rasheed down these two diverging roads, but there’s nothing to make us believe he is besides wishful thinking.) Rasheed’s mentor Mr. Davis (Curtiss Cook) is an upstanding citizen doing for other troubled youths what he did for him as well as a junkie whose descent Sheed may have facilitated.

Calvin (Robert Christopher Riley) is Sheed’s right-hand and Rasheed’s confidant—best friends through thick and thin. Maya (Margot Bingham) is the girl who got away either because Sheed refused to give up the life or because Rasheed was too focused on avoiding it to see anything other than his education. And his mother (Paula Devicq’s April) ends up being the product of his success. With Sheed’s money she moves out of the projects he helps keep derelict to live a life she never wanted. With Rasheed’s ambition she stays in a community that flourishes to escape the drugs, living the life she dreamed she could. Despite everyone’s differences, however, their identities remain unchanged. It’s their circumstances that allow them to flourish or lament—enjoy happiness or completely self-destruct.

And that’s what makes this film captivating. We’re watching as this man reacts with the same exact mindset, morality, and emotion in two separate realities. Throwing Rasheed into Sheed’s body or vice versa will probably reach the same results. Both are highly intelligent, extremely confident (at times to the point of stubbornness), and full of love for those they care about. One may perform these traits with a razor sharp edge and the other heartfelt sympathy, but the soul within each never wavers. We all face no-win situations in our lives and carry the burden of living with what we’ve done too. Not everyone commits homicide or peddles death to children nor do they weigh corporate greed against community. We simply live with the consequences of our actions.

Rasheed isn’t an aberration, though. The others have their make-or-break moments too whether it’s dealing with trust (Maya), responsibility (Calvin), or vices (Mr. Davis and April). It’s only through the evolutions (or devolutions) of those around us that we’re presented with opportunities to change. Perhaps Sheed needs to see how the life he chose is destroying those he loves to realize the error of his way. Maybe Rasheed must appreciate what those he loves have regardless of its comparative status to wealthier aspirations to understand “nicer” isn’t always “better.” So he acts against character on both sides of the plot, each discrepancy causing others to question his reliability and motivations. He must stand up for who he is and not that which he thought he had to be.

There are dodgy moments and a stretch where Rasheed is all but forgotten as the admittedly more conventionally dramatic life of Sheed takes over, but Destined‘s goals surpass these hiccups in budget and focus to hold intrigue and draw us in. Besides a rather heavy-handedly melodramatic mirroring at the very end, Basir and Hardrict earned my full attention. Curveballs are thrown and love interests/friends aren’t lazily written as identical since no two lives ever are. I invested in this character and the way he stayed true to that promising young boy at the start despite the years and memories separating his past from today’s dueling presents. Because we author our destinies in real time, though, it only takes a sliver of that innocent purity to readjust our course.