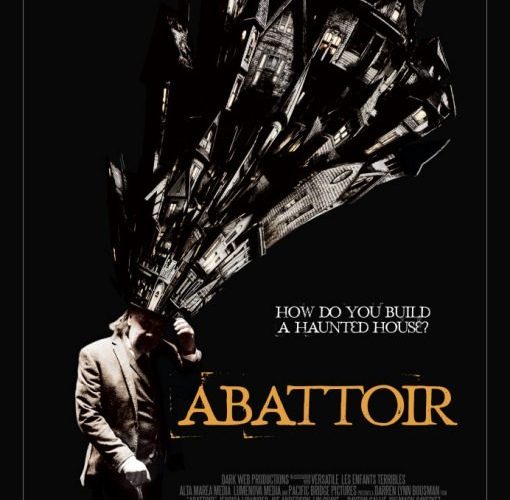 You have to admire Darren Lynn Bousman‘s ambition because he could have just kept going with the Saw franchise after taking over the reins from James Wan. Instead he jumped ship to work on a passion project developed with Terrance Zdunich and Darren Smith entitled Repo! The Genetic Opera. Here was a science fiction horror musical based upon a short produced two years previously with enough character and originality to become a cult favorite. Since then he wrote a couple films that didn’t go over well and reunited with Zdunich on another musical before delving into a comic book universe entitled Abattoir with writers Rob Levin and Troy Peteri about a mysterious man who collects rooms where tragedies occurred and fashions them together into a nightmarish ghost-filled mansion.

Begun as a six-issue series, the property gained steam with its multimedia publisher Radical Studios to go one step further into creating a feature film. Rather than adapt the comics, Bousman recruited Christopher Monfette to craft a sequel that was able to chip away at the enigmatic Jebediah Crone’s (Dayton Callie) past. It would focus on a real estate journalist (Crone’s supernatural objects of choice are rooms after all) named Julia Talben (Jessica Lowndes) and her ex-boyfriend Detective Declan Grady (Joe Anderson). After her sister Amanda (Jackie Tuttle) is brutally slain with her husband and son, the room it happened in disappears. It’s learned that Crone swooped in, bought the place, and extracted it much like he had before. Julia is understandably desperate to discover why. Crone must have an audience (a sequel has already been announced as The Dwelling), but this premise is beyond suspension of disbelief. A man flips houses at a loss after removing rooms? It’s not like he pays to reconstruct the missing kitchen or ceiling either. He leaves the exposed two-by-four framing and walks away. So how has nobody questioned decades of this strange activity? You can draw Grady as the cynical, hard-boiled cop dismissing such nonsense with “people collect crazy things” all you want, but accepting every detective through the years doing the same goes beyond conspiracy theory. Add how Julia’s ability to put the pieces together so easily only reveals a fateful connection to this underworld of death and the film becomes an impossible pill to swallow.

I read the comics to hopefully gain insight only to be disappointed again. I’d actually recommend steering clear of them because they supply a different origin story for Crone. He’s still a warped preacher of sorts, but in the books he does it for fun. In the movie he’s been given a disturbing backstory with a modicum of sympathy to understand his why. The comics have him preaching hedonism; the film has him promising hope for a miracle to save the town of New English. Besides Crone and an introduction of Claire—a too coincidental to be coincidence character name from the movie that we never truly comprehend contextually—the two projects don’t fit together. They each confuse on their own so frustration simply increases after experiencing both. Bousman doesn’t do himself any favors by setting the film in present-day (the comics take place in the 1980s) with cellphones and modernity despite his leads speaking as though they lived in the 1950s. Julia never feels like she belongs, her dialogue exposing her to have been ripped from a bygone era of news “fit to print.” Grady isn’t much better, their rapport trying its hardest to mimic Humphrey Bogart and any of his many female costars. I’m all for high style if it makes sense, but these two stick out like sore thumbs. It’s not like Amanda follows suit. The off-putting New English residents (John McConnell‘s Sheriff McDermott and Lin Shaye‘s Allie) don’t either. It’s just another piece of color convoluting the whole beyond comprehension.

I can’t call the acting bad, though, since it’s consistently measured to assume intent. I chalk it up as another misstep in a production of many, least of which is performance (Callie, Shaye, and McConnell are delightfully attuned to their roles). The most glaring issue comes from its plotting and the density of its exposition. There’s so much to digest between multiple murders, Crone’s motivations, a town gone mad, relationship drama, and adoption revelations that your head can’t stop itself from swimming once you reach the climax. Thankfully Bousman’s endgame does deliver the supernatural slaughterhouse of the title to great effect with inspired spectral victims looped in suspended animation. It’s so memorably jarring that you wonder if the whole was just sloppily reverse engineered from this massive undertaking.

This hypothesis makes a lot of sense when you think about it. Bousman and company wanted to create an ever-expanding haunted house of gruesome violence—a jigsaw puzzle of dread fitting neatly together to trap damaged souls in one place. The difficulty was then finding a story that led them to that monstrosity so the legend of Crone could be born. Sadly nothing the filmmakers came up with equals the potential of their centerpiece. Their tongue-in-cheek decision to make it so the real estate world (whether realtors in the comic or journalists in the movie) is rendered as law enforcement is laughable and the connective tissue a la Claire tenuous at best, absolutely distracting at worst. Ambition is laudable, but sometimes the end result falls short of expectation.

It’s not all bad though once you realize Crone is the constant. He’s the character everything’s built around whether intentions are pure or not depending on medium. Julia and Grady are drawn into his world, not the opposite—a truth proving more than metaphorical as the film progresses. The heroes become expendable in a way that injects suspense where most genre work can’t. Abattoir is less about defeating a villain than understanding him. It’s a mystery to discover a damningly utilitarian community willfully committing unconscionable acts for some far-flung idea of “greater good.” I only wish Julia’s role wasn’t so blatantly manufactured. She’s written as a pawn from the beginning and is treated as one throughout because making the abattoir’s construction paramount apparently renders character development unnecessary.

Abattoir is now in select theaters, and on VOD and Digital HD.