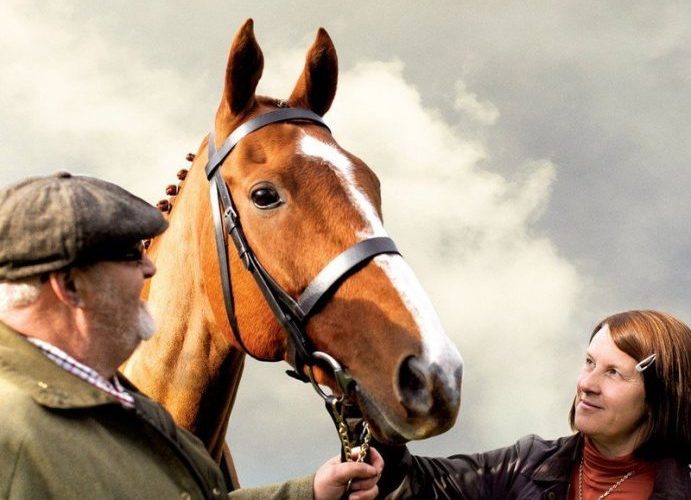 Like its namesake mutt, Dream Alliance, Dark Horse is an easy documentary to underestimate — an archetypal underdog story of a working-class town coming together despite economic hardship through a shared pursuit. It’s the classic snobs vs. slobs story as a group of dozens of regulars at a local watering hole in the impoverished Wales mining town of Cefn Fforest pooled their meager earnings, and bought a winning racehorse in the early 2000s.

But while the majority of Louise Osmond’s documentary feels as circuitous as a horse race from the starting pistol shot to the final stretch, it’s also told with an uncommon level of pathos and craft, emphasizing the symbolic personal victories above the historical viewpoint. Even delivered with breakneck exposition, Dark Horse would be immediately compelling, a story whose rags to riches arc aligns with some of the medium’s most immortal stories, but Osmond repeatedly demonstrates storytelling instincts that sidestep nudging self-mythologizing or straight-ahead storytelling. Like some of the most unassuming underdog documentaries of the last few years like King of Kong, Senna, and Buck, Dark Horse knows that the characters can speak for themselves without editorializing.

Particularly, Osmond knows how to present the citizens in a no-nonsense fashion that balances their day-to-day struggles and the parallel triumphs of their beloved horse. Befitting their hometown, these are citizens who are barely passing muster on their mortgages, let alone possessing the funding for the nearly endless maintenance fees of owning a horse.

Whether it’s temporarily staving off a mid-life crisis, or providing an oasis from the anxieties of reality, the worries of the characters of Dark Horse aren’t automatically romanticized or placed into a realm of fantasy. It’s telling that Jan Vokes, the naturally mythic supermarket worker by day and horse owner by night, doesn’t refer to the peaks in hyperbolic ineffabilities as much as words like “taxing.” For these fledgling owners, the horse borders on a pyrrhic undertaking as it not only hemorrhages money, but becomes a tremendous mental strain. And while some of the owners watch the television — or in some cases, from the ivory tower of the owners room, hoping to make money on their magical nest egg — others prepare for the horse races with panic attacks. As Dream Alliance rises in the ranks, Vokes is so superstitious that she can’t even watch the television for fear that she’ll jinx Dream Alliance into some irreparable injury.

Despite the levelheaded treatment of the featured players and the cleanness of the storytelling, Dark Horse occasionally feels a bit incomplete in presenting a sense of place or articulating the motives of the invisible participants. For a group that included nearly thirty people, there’s only about a half-dozen characters who dominate the run-time while others exist as unknown personalities in archival footage. Similarly, Osmond includes a few too many scenes that yield little more than provincial clichés or repeated sentiments about the David and Goliath circumstances of Dream Alliance. Repetition is nearly unavoidable with a story that’s this linear, but it can’t help to make the movie feel smaller.

Dark Horse doesn’t offer any new revelations about the underdog story, but it’s a reminder that this story exists as more than an elemental struggle. They’re about real people whose connection is about more than winning or losing. Osmond knows that these people don’t just want to be an obscure footnote in history books.