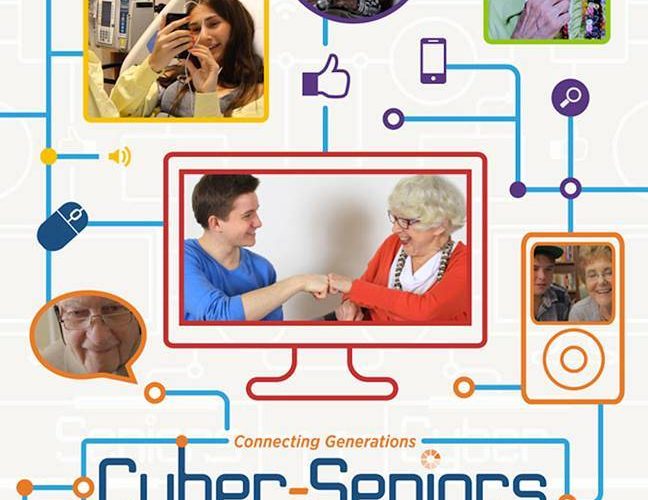 Cyber-Seniors, a personal documentary directed, narrated and edited by Saffron Cassaday (who remains mostly off camera), opens with the explanation that the inspiration for the program it documents came from her sisters’ own interactions with their grandparents. Her sisters, Macuallee and Kascha, while in high school, founded Cyber-Seniors, a mentorship program that pairs tech savvy, mobile native teens with senior citizens in assisted living facilities in Toronto. The first step normally involves enrolling them in Facebook, so that they can connect with friends and family.

While Cyber-Seniors is less than cinematic, like the web videos the seniors produce later in the film, it’s often entertaining, inspirational and instructive. The Cassadays are essentially like any North American family; they draw inspiration from their own experience and set about to make a change. As a documentary the material, while never dull, does stretch itself a little too thin at times. It is, perhaps a little longer than it should be at 70 minutes. As personal as the story is, the family dynamic of the family is also kept largely off camera, especially as we learn Macuallee is diagnosed with cancer right before prom and graduation. While an unrelated filmmaker would have built a dramatic unit of this incident, a filmmaker like Saffron respects her family’s privacy. Focusing mostly on the Cyber-Seniors program, the film remains positive, optimistic and uplifting while skirting around some of the harder-hitting questions that might be some concern for scholars of Media Studies. One wonderful interaction is when Shura – who is, in essence, the star of the film – is introduced virtually via Facebook to Ellard, who lives in another senior housing facility. This moment reminded me of discovering AIM in middle school as a means of connecting with my friends. I suppose this is was the beginning of the end of voice and maybe even face-to-face communication. The seniors, mostly trained on computers, learn to Skype and in one instance, Annette, the youngest of the seniors has her mentor enroll her in JDate.

The personal lives of the mentors, whom I assume are juniors and seniors in high school, are largely kept off-screen, however I’d be curious to see what kind of training and orientation they undergo. As a group, I admire the patience and care they show in their sessions. The most difficult, of course, is when they forget passwords (just like all of us) and also have some trouble remembering their security questions.

Advocacy documentaries about grass roots organizations are essential; here this one is made with a small crew and limited funds with a sense of immediacy that becomes apparent once we know what the Cassaday family is facing. Here the sessions, including a series of inspiring YouTube videos the Cyber-Seniors make, prove to be reflexive. Sharing tips for happiness including life hacks, wisdom, and regiments, Saffron Cassaday has made a film that aims to inspire young folks to make an impact even when they are facing the odds.

While Cyber-Seniors tells a few personal stories in verite as the seniors connect with each other and their family, it features no voices of authority, no PhDs in communication or psychologists musing on about the large implications of this work. While I think those voices, “the experts” could have made for a more intellectually stimulating film it would have also undermined the authenticity of the grassroots work this group is engaged in. With a narrow focus, Cyber-Seniors is inspirational and instructive, while, given its elements, remaining focused upon the authenticity of the work it documents. Could a better film have been made of this material? Sure, but that would have required walking a fine line between accurate storytelling and melodrama.

Cyber Seniors is currently playing in LA (at Laemmle Music Hall) and will be opening on Friday in New York (at Cinema Village) and in Toronto on May 30th (at the Carlton Cinema).