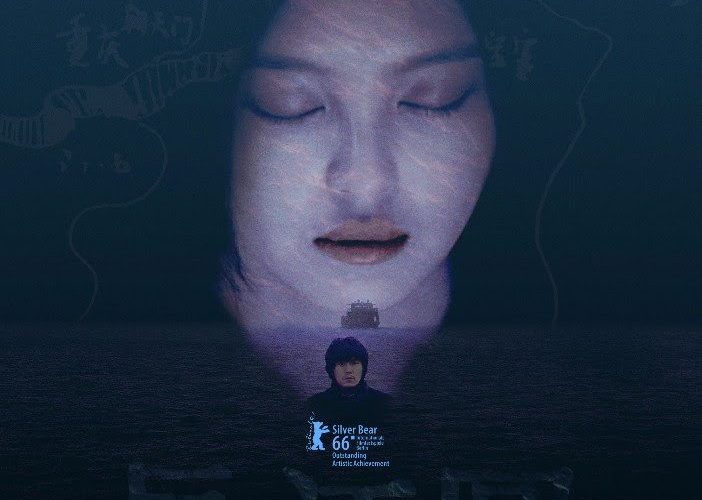 In the early minutes of Chinese director Yang Chao’s sophomore feature, a fish is thrown into a bowl of water somewhere along an anonymous riverbank, darkened with bluish hues, lit only by the gleam of fire. It’s a mightily fine shot that probably would have made a bigger impact if some recent déjà vu courtesy of The Revenant hadn’t kicked in. That said, its serene beauty and intrinsically fabulous quality set quite the visual/metaphorical stage for a surrealist exploration of nature and men. Moreover, the thought of what legendary cinematographer Mark Lee Ping-Bin – Taiwan’s answer to Lubezki, who’s lensed almost the entire filmography of Hou Hsiao-Hsien – can do with this is nothing short of mouth-watering.

Unfortunately, things kind of go downhill from there.

It’s a thankless job to synopsize what happens in Crosscurrent because happen is a strong word for something with such an oblique approach to characters and narrative. This much we know: the movie unfolds in diary form (literally marked Day 1, Day 2…) as our boat-riding protagonist Gao Chun (Hao Qin) cruises upstream the Yangtze River in search of the possible love of his life An Lu (Zhilei Xin). The perfectly reasonable-sounding premise goes on to be stretched direly thin over an arduous length, fleshed out only with random bits of back stories and out-of-context scenarios, filled otherwise by a lot of nature-gazing and even more poem-reading.

Boy are poems being read in this one. Where we would have liked to know more about the characters, Gao or An would – completely out of the blue – recite entire verses of poetry musing vaguely about time and soul. When An is nowhere to be seen and Gao is busy doing nothing, voice-over would chime in with an avalanche of words, spelled calligraphically across the screen for good measure. Overall this creates the strange effect of having a plot-averse movie with a low dialogue-density that’s at once bombastically noisy. Yang, who wrote the script himself and apparently an additional poem collection for this purpose, is evidently a man of letters. But as a filmmaker, his decision to rely so heavily on regurgitating text comes across as misjudged if not self-obsessed. It serves very little narrative purpose and manages to celebrate the formal elegance of the Chinese language in a particularly inelegant way.

Equipped with excessive lyricism and no clear idea of what’s going on, we journey ever deeper inland via a series of lesser-known cities along the great river. The locations themselves are beautiful, be it the deserted isles near Anqing or the steep rock face off the coast of Yibin. And through the sheer volume of impressions collected, Crosscurrent does evoke at times an authentic lure of indigenous cinema or road movies befitting of its Chinese original title which translates to The Map of Yangtze or Yangtze Illustrated. However, any chance of building on such quiet charms is crushed by Yang’s insistence to bring the far less compelling love story into the mix. Yes, it’s thematically ambitious to try to sketch a relationship against a physical geography that’s been violently changing, but in this movie those two aspects never congealed. Instead of adding an emotional layer to the purely observational, the drama is so abysmally handled you find yourself constantly wishing for a straight-up documentary that would just let these amazing places tell their tales.

Coming back to Mark Lee Ping-Bin, who won a Silver Bear for Outstanding Artistic Contribution at this year’s Berlinale, this really isn’t one of his many soaring achievements. Besides the awfully promising shot mentioned at the top, there are but a handful of scenes worthy of his name. One such scene is the boat’s passage through the Three Gorges Dam, an enormous man-made structure carved out of the most challenging and breathtaking of landscapes. Seen from inside the gigantic hollow, it captures a true sense of wonder through magnificent command of pace and perspective. In those fleeting minutes of mystical, otherworldly grandeur, the film has reached its unquestionable aesthetic peak. If held against the celestial standard of someone who’s shot The Assassin, In the Mood for Love, the French Renoir and the Japanese Norwegian Wood, however, the bulk of the film’s footage looks decidedly unspectacular.

Counted among China’s “sixth generation” of filmmakers, Yang, like his compatriots Jia Zhangke, Ye Lou, Hu Guan, Xiaoshuai Wang, aims to make films that are socially conscious and focused on an ancient country in transition – economically, environmentally, psychologically. It’s an exciting proposition that, when met with skilled execution, can lead to artistic and cultural game changers. In this sense, Crosscurrent represents quite a remarkable blunder considering how much effort and noble aspirations go to waste because its maker forgot to tell a good story first.

Crosscurrent is now in limited release.