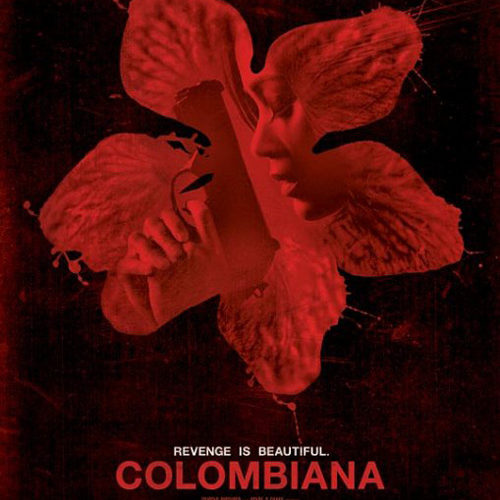 When it comes to an action flick scribed by the prolific Luc Besson, one shouldn’t be surprised to see a badass heroine using a toothbrush and towel as her weapons of choice during a fight. This is the type of hyper-real, action packed, quick-cut orchestra of smacks and grunts we’ve come to welcome at the multiplex. And while Besson’s disciples have gone on to claim some fame for themselves beyond the looming shadow of their cinematic father—Louis Leterrier with The Incredible Hulk and Pierre Morel with Taken—it is the man with the best name in the business who is still cutting his teeth on the fun scripts. Olivier Megaton may not have crafted the success to warrant the notoriety of the duo before him, but he knows how to keep an audience entertained.

With Colombiana, you get what you expect from Besson’s menagerie of laconic killers. Like Léon, Frank Martin, and even Danny the Dog before her, Cataleya Restrepo (Zoe Saldana) is a woman of few words to go along with her extremely potent bite. After witnessing the murder of her parents as a little girl in Bogotá back in 1992, escaping international custody upon releasing her father’s memory card as a passport to America, and finding her uncle in Chicago to help seek revenge, it’s only a short fifteen years before the hard work culminates into an opportunity to unburden the heavy weight forever on her heart. Quite possibly the best assassin for hire in the business, her killings are orchestrated to serve a second purpose beyond getting paid. A means to an end, each mark is left with the drawing of a flower on his chest—a calling card for Don Luis (Beto Benites), the man who destroyed her family.

Don’t think the action is held at bay until the slinky, sexy form of Saldana rises from the shadows to dispatch an imprisoned target, though. No, little Amandla Stenberg has a few moves of her own. The twelve year-old Cataleya sits in stunned silence as her parents make their final stand against the cartel her father was hoping to leave behind, tears welling despite the motionless expression with only the tiniest of tremors risking to shatter it into fear. She isn’t one to sit back and let the formidable Marco (Jordi Mollà) push her around, instead stabbing him in the hand and whooshing out the window for some Parkour down to the streets below. It’s a chase scene for the MTV generation—as all the action sequences in these films are sadly now constructed into—but the speed and acrobatics make up for the fact we only see screeching motorcycle tires and glimpses of jumping people blurred into the next frame every second. Only with Uncle Emilio (Cliff Curtis)—family—can she finally release the grief-stricken child within and cry for the loss of her parents. When he enrolls her in school despite her wishes to train for battle, her smarts beat out emotion. She takes his wisdom at face value knowing the skills necessary to kill will be taught as the years go by, his own revenge mission on the people who murdered his son serving as the lesson plan. Saldana is just a more mature version of this driven child, her goal never straying from her mind. But no matter what Cataleya becomes, or how well she can handle herself on a job, Emilio still watches over her. Handpicking assignments to keep his word to his brother, he will do whatever it takes to keep her safe. Unfortunately, once the police cease sitting on the drawings she leaves behind on her victims, his own safety is put in jeopardy.

And through it all lays the ancillary players to make a plot where scorch and burn could easily take over. A corrupt CIA agent played by Callum Blue enters the fray as a pawn to tell why Don Luis has come to America; Michael Vartan arrives in a masculine/feminine role reversal to play the wide-eyed romantic whose love for a mysterious woman will prove to be her undoing; and the great Lennie James brings the dedicated FBI agent in charge of finding her to life. Devoid of his fantastic cockney accent, Special Agent Ross gets the job done walking the fine line of doing his duty and setting things right. Besson loves this character trope too well—see the Transporter series’ Tarconi—but it is good he allows James to stay strictly black and white without falling into the gray area of corruption or collusion.

That said, though, characters are the least interesting bits when going to watch a flick like Colombiana. We should feel lucky how once in a blue moon one of its ilk can attract actors of the caliber included here, each only as good as the high-octane warfare they bring since the often poor dialogue won’t win them any Oscars. Leading the way is Saldana, never disappointing as she gives her assassin a brilliant blend of brains, brawn, and beauty. As adept at firing two automatic weapons into a crowd of Colombian henchmen as she is at stealthily traversing a rooftop ledge with only her hands, Cataleya is a smooth operator. Optimizing her environment to expedite jobs, we become privy to a couple great death scenes from the likes of sharks, fisticuffs, and dogs—each graphic scene bolstering the simple plot as its sexy star blows things up. And that, my friends, is about as good as it gets for a fun summer romp littered in gunfire.