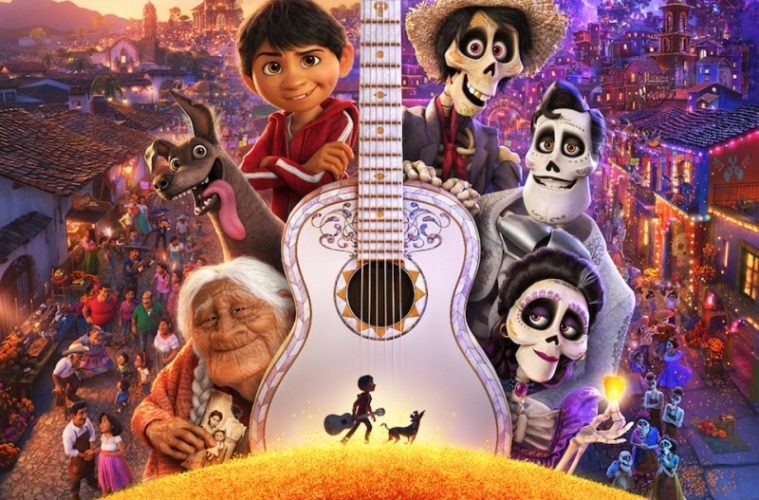 Pixar’s 19th feature Coco was conceived as a tribute to Mexican culture, which is perhaps its most innovative quality, though it’s nevertheless a transporting and entertaining addition to their canon. It’s a testament to the animation company’s creative ingenuity that they have managed to make a film that tackles a subject matter as desolate as death in ways that children could breezily enjoy and adults could ponder in more thought-provoking ways. After a string of films ranging from safe sequels (Finding Dory) to franchise duds (Cars 3) to not-fully-realized adventures (The Good Dinosaur), this is Pixar coming back in a heartfelt, gorgeous way.

Coco’s main protagonist is 12-year-old Miguel Rivera (Anthony Gonzalez, in fine vocal form) who was raised by his family to disavow anything having to do with music. It’s been three generations since the Riveras have even heard music in the house, mostly due to Miguel’s great great grandfather abandoning the family and pursuing his dream of being a musician. Not too long after the departure, the family had to reinvent itself and got into the shoemaking business. The rules of the house are simple: not music whatsoever, not even singing.

Miguel, however, loves music and violates the Rivera rule – over the years, he has taught himself to play the guitar in the isolated family attic, which has become a shrine filled with lit candles and placarded pictures of his musical idol Ernesto de la Cruz (Benjamin Bratt). De la Cruz died young, when he was smashed by a church bell while performing, but he left countless classics behind in musical black-and-white films, of which Miguel has memorized every word. Miguel’s finger playing on his guitar strings is marvelously-rendering, as we see every fret pushed down and every string strummed.

One of the most beautifully-conceived and colorful Pixar films to-date, Coco doesn’t quite have the originality of Inside Out, or the Chaplin-esque poetry of Ratatouille, or even the sheer narrative inventiveness of the first halves of Up and Wall-E, respectively. Instead, Coco relies heavily on its vibrant, fluorescent palette and old-fashioned storytelling, with a universal message of never forgetting the memory of your elders. The elder here, and most important central figure to the story, is Miguel’s wrinkled, 97-year-old granny whose fading memory but deeply-kept secrets lay down an emotional resonance.

Since there is no persuading the rest of his family to change their outlook on music, Miguel’s talent for elegant guitar playing and singing is kept secret. He does put himself in a bit of heat when he announces to his family of his intention to perform at the Día de los Muertos talent show as part of the “Day of the Dead” traditional, yearly celebrations which Mexico is well-known for. The family becomes suspicious; Miguel’s replica Ernesto de la Cruz skull-necked guitar is discovered and smashed by his abuelita (Renee Victor). Miguel runs away, leaving his family in a panic.

Guitarless for the competition, Miguel decides to sneak into Ernesto de la Cruz’s burial chamber, a kind of monument for the legend, and steal his exhibited guitar. The act throws down a curse on Miguel and has him sent to the Land of the Dead, a joyous purgatorial underworld where skeletal figures loom, only surviving off their living relatives’ memories of them. The way Unkrich envisions this afterlife is as a candy-colored metropolis filled with surreal moments of both slapstick and genuine, eye-popping detail.

The colorful designs that come with the Día de los Muertos celebrations are on full glorious display in Coco. From the Ofrendas (altars of worship), to the brightly lit orange petals that separate the bridge between the living and the dead, all the way to the papal picados, this is a representation of Mexican traditions in as realistic and authentic a way as possible. Unkrich takes full advantage of the imagination that comes with this highly colorful holiday; even the alebrijes, the brightly luminescent spirit animals, are there to help the dead in times of need.

Just when you think you know where Coco is headed, Unkrich takes surprising turns leading to a poignantly effective finale. What was seemingly a simple story of a boy trying to find his way back home becomes something altogether different. The waterworks are cued as guitar strings and heartstrings are equally and authentically plucked in exuberant fashion.