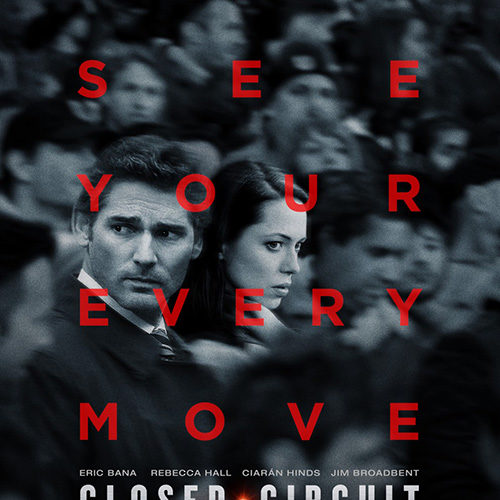 Director John Crowley is a man with a good eye for picking dynamic screenplays. His feature film debut Intermission is a fun Irish romp, while his sophomore effort, drama Boy A, is criminally underrated and shamefully ignored. So, seeing him sign onto a project written by the man behind Dirty Pretty Things and Eastern Promises — Steven Knight — was an exciting discovery, especially after finding the thriller’s trailer to be intriguing enough without spoiling too much of its conspiratorial plot. And everything does work harmoniously for the majority of Closed Circuit, to create the exact taut mystery of governmental corruption and legal system loopholes I desired. However, while the plotting kept me riveted in watching each new secret reveal itself, a tiny detail crucial to helping put the main pieces in play ultimately transforms into its greatest liability. A romance between lawyers Martin Rose (Eric Bana) and Claudia Simmons-Howe (Rebecca Hall) may get spotlighted in the marketing materials, but it’s actually just a tool used to add one more layer of deceit to the proceedings. Well, at least until it can rear its head again during an ill-advised moment that belittles the dastardly deeds that come beforehand. You see, the British judicial system allows evidence that poses a threat to national security to be hidden from not only the public but the defendant and his attorney as well. So, while an open trial is conducted for the cameras, a separate one is held behind closed doors with only the prosecutor, judge and “special advocate” for the Defense.

A rule is therefore rightfully instated to ensure the defense attorney and special advocate have no questionable connection to possibly jeopardize the case by facilitating the exchange of this classified material. When the original barrister turns up dead by suicide and the replacement (Bana’s Martin) just happens to have had an affair with the already appointed advocate (Hall’s Claudia), it’s either force the other to resign or agree to keep the truth under wraps. Their choosing the latter becomes the lynchpin to how they handle the revelations to come. The case at hand is concerns one of the highest-profile terrorist attacks in British history. One-hundred and twenty people lost their lives when a suicide bomber engaged an explosion on a crowded street. Farroukh Erdogan (Denis Moschitto), the lone survivor of the cell, is fingered as the mastermind by default. While his wife and son await the verdict in a safe house and the country looks for vengeance, he quietly sits in his cell with nothing more than a couple of flimsy excuses that simply don’t reach far enough to exonerate him. This is the detail that first cajoles Martin to dig deeper into his deceased predecessor’s files and ultimately onto the path towards a horrible truth he knows he probably cannot defeat.

A man of integrity, whatever odds are stacked against him will never make him back down. He and Claudia move forward with their consulting confidant Devlin (Ciarán Hinds) as even more walls are erected. And the need to take the fight into their own hands is acknowledged right as their enemies decide they’ve become a liability and a threat. A suspense-filled battle of wits ensues as they race to protect the one piece of evidence with a chance at exposing the truth. The twists and turns are expertly crafted, Bana and Hall’s idealistic heroes prove equal to the task set forth by a deliciously cunning bit of villainy with a disarming smile from Jim Broadbent‘s memorable Attorney General. But just as the plot reveals itself to be more than game for a believably dark conclusion for a case we resigned ourselves into knowing was completely out of our leads’ hands early on, the smidge of romance which worked beautifully as a way to color personal motivations and push them onto their respective trajectories devolves into unrequited feelings that hope to prove more important than the job. So just as Closed Circuit masterfully wraps up its legal thriller blatantly questioning the validity of Britain’s judicial system and military operations, we must endure the tired theme of danger and a looming morality mending fences for a second chance at love. It feels false as a last-ditch effort to provide mainstream audiences a silver lining and unfortunately taints the good coming before it enough to bear mentioning.