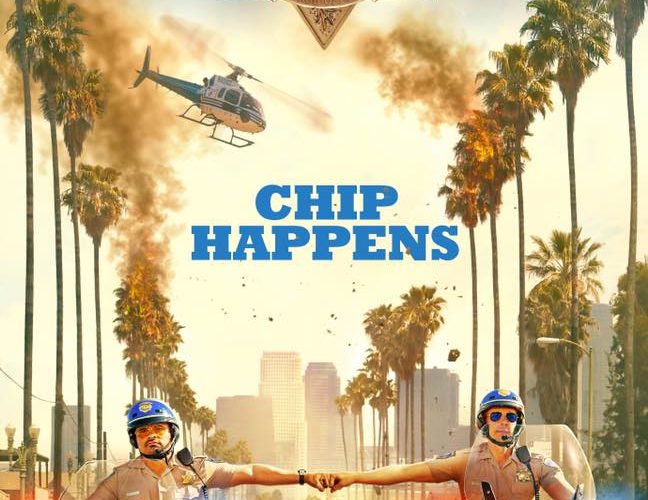 Borrowing character names and a few elements from the Larry Wilcox- and Erik Estrada-led television drama CHiPs, Dax Shepard’s remake feels more like a big-budget reboot of his delightful shit-kicking action comedy Hit and Run. His sophomore feature as a director delivers, fittingly, a few sophomoric laughs operating at the same frantic energy level as his previous film. Although its structure is similar to that of a loose Judd Apatow sensibility (which can be quite painful, as was the “extended cut” of the 40-Year-Old Virgin), CHiPs is a buddy comedy that’s more interested in homosocial bonding than the actual mission. The problem is the bonding, as sweet as it is, grows a little tiring and the film is structured so that we’re far ahead of our heroes, and where’s the fun in that?

Shepard stars as Jon Baker, a former BMX champ who has lost both his sponsors and his wife Karen (Kristen Bell) after breaking more body parts than we can count, from his leg to his scrotum. A terrible cadet at the academy, his only interest in the California Highway Patrol is to save his marriage. After a year of counseling, he’s learned women marry their dads and Karen’s dad was a cop. He’s granted probational status by a sympathetic sergeant played by Maya Rudolph and teams up with Office Frank “Ponch” Poncherello (Michael Peña), a sex-addicted FBI agent sent to Los Angeles from Miami to go undercover after a series of armored car heists leads to a suspicion of corruption within CHP’s branch. We, of course, know who’s behind the heists: the intimidating veteran Lieutenant Brown (Vincent D’Onofrio) and Lindsay, a sexy CHiP beat cop who almost gets the better of Ponch via sexting (Jessica McNamee).

A slick B-movie, CHiPs is full of lowbrow gags — some of which work, and while many others fail, they don’t linger as they might have in a film running low on energy and laughs. Shepard also offers a revisionist psychological take on characters that would typically be out of central casting: the handsome womanizing cop and his goofy side-kick with something to prove. Shepard’s probe of masculinity is so literally on-the-nose that at one point Poncherello’s noggin and lips graze Baker’s genitals. It’s a sequence that at least provides some gratuitous nudity for the other sex to make up for what appears on Ponch’s iPhone.

Curiously, CHiPs is not nearly as bad as the brainless reboots of action-comedies that have come before it. It has a few call backs to a show that had a different tone, but Shepard offers more of a revisionist take in the vein of Todd Phillips’ Starsky and Hutch. He’s also clearly influenced by Phil Lord and Chris Miller, whose take on the 21 Jump Street series was the very best kind of self-referential comedy reboot. The film’s lack of success seems to stem from its insistence, oddly enough, on having a thin plot that only occasionally allows Baker and Ponch to break the fourth wall with their comedic chemistry. However, the film’s utter stupidity is not without merit, and if it’s successful, I imagine it could spawn a sequel with deeper character development and a more engaging plot. Perhaps that is more credit than is due here, but Shepard’s screenplay only feels a few drafts away from something that might have worked.

CHiPs is now in wide release.