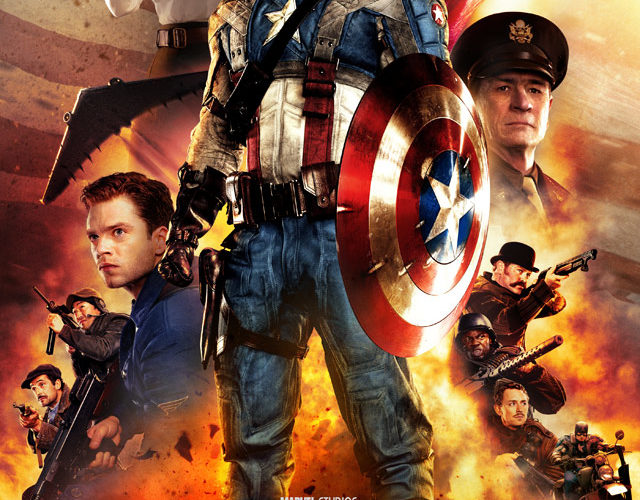 Recalling the serials that populated the time period it encapsulates, Joe Johnston’s Captain America: The First Avenger, the last in a long summer of superhero films, deals in absolute good and absolute evil in a world in which a first kiss is just as important as preventing a maniacal villain from blowing up the world.

Chris Evans plays Steve Rogers, a scrawny Brooklyn kid with dreams of making his patriotic, dead parents proud by fighting for his country in WWII. Unfortunately, the young man is 5-foot nothing, 100-and-nothing and full of too many ailments to count on both hands. Luckily, he’s also selfless and fearless, never backing down from a fight and always willing to help a friend. Dr. Abraham Erskine – a lovably noble Stanley Tucci – notices these traits, enlisting the nobody into a special government program. The other genius in the room is a young Howard Stark, played with plenty of charm by Dominic Cooper. Someone else also recognizes Rogers’ courage, one Peggy Carter, played by Hayley Atwell. The young British actress adds a spunk to a role usually relegated to smirks and gestures in the ever-growing comic book-verse (see Natalie Portman in Thor, Blake Lively in Green Lantern). She is a domineering presence on screen here, and Johnston is smart enough to know that even after Rogers becomes Captain America, he must still be taught how to love by a woman who knows how.

Even after moving on from his roots as a visual effects artist for George Lucas and Steven Spielberg in the 1980s, Johnston has suffered a career full of what mostly feels like Spielberg-ian retreads (The Rocketeer, Jurassic Park III, Hidalgo). Here he shines, utilizing the never-ending resources provided by Marvel Studios to create something truly memorable.

Consider a chase scene through a beautifully-designed 1942 Brooklyn in which the newly-grown super soldier chases a Nazi spy through the streets. The spy tosses a little boy into the water, Rogers running to the edge of the dock prepared to rescue the child. He looks down to see the young boy treading water. ‘I can swim. Go get him!’ the boy tells the hero enthusiastically. It’s a funny, earnest moment that reminds viewers that this is an adventure film, which is to say fun. Johnston and his cast are having fun here, and it shines through. Even the film’s villain is clearly enjoying himself. Played by Hugo Weaving with a ridiculous German cadence, General Johann Schmidt, a.k.a. Red Skull, is the perfect bad guy for this kind of movie. He’s wholly bad, concerned only in world domination. Why? Because he’s a God, of course! Even the Nazis are tired of him halfway through this thing. Weaving plays this superiority to its highest pitches as though he was born to do it. And after watching this and The Matrix films, perhaps he was.

The script, from Christopher Markus and Stephen McFeely, is packed with quips and yarns and enough space for a nicely-built romance between Evans’ Rogers and Atwell’s Carter. The two leads have an Old Hollywood look that suits the style being shown off.

Johnston and company are aware that introducing a hero means more than showing of his suit and gadgets or building up the universe he will eventually encapsulate. Before any of that, we must care about who he/she is. At the climax of this film, which takes a page out of Michael Powell and Emeric Pressburger‘s superb A Matter Of Life And Death opening, we care about what happens. Who wins, who loses. And though it’s never much of a question who’ll save the day, it’s nice to be able to feel like the good guy’s worth rooting for.