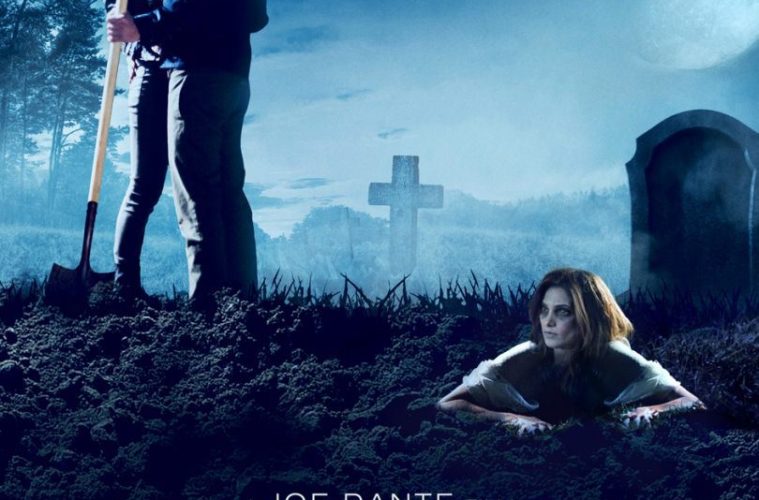 In the 12 years since Joe Dante’s last genuinely great release (Looney Tunes: Back in Action), Dante has only made two films. 2009’s The Hole was a movie completely in the director’s wheelhouse but still managed to miss the mark. His follow-up, and his newest film, Burying the Ex, is a modest return-to-form.

Max (Anton Yelchin) works at a horror-themed shop in Los Angeles. He’s got a job he mostly loves, and better yet, a beautiful girlfriend, Evelyn (Ashley Greene). She’s a little obsessive and pushy, but her heart is in the right place. When her obsessive tendencies become too much to bare, though, Max decides it’s time to break it off, but right before he’s about to dump her, she’s struck by a bus. Max blames himself for her death, but life begins to improve when he starts seeing Olivia (Alexandra Daddario), who, like Max, is a horror movie freak and all around nerd. Shortly after they start seeing each other Evelyn comes back to life. Once again, Max has trouble breaking up with his dead girlfriend, who wants to spend the rest of her decaying days with him.

It’s a fairly thin story, one that’s often stretching itself. Burying the Ex is under 90 minutes, though, so there’s not too much padding. Its obvious metaphor is also quite effective. It’s a shame the film is being released so soon after Life After Beth, considering there’s more than a few similarities between the two movies, but Dante’s movie stands on its own. The director’s cartoonish live-action eye gives Burying the Ex a different energy and tone than Life After Beth.

Dante manages to pull off the tonal challenges. When Evelyn dies, it’s not played as a joke. Screenwriter Alan Trezza could’ve milked her death for easy gags, but it’s a smart choice to give her death some real impact. Evelyn isn’t written like most catty or jealous girlfriends. Trezza and Greene make Evelyn empathetic, at least until she becomes a full-on monster.

Dante and Trezza ultimately underplay the monster side of Burying the Ex. There’s very little focus on the rules and world-building, which is completely fine when the characters are engaging enough, but considering we all know how fun Dante can get with a little monster mayhem, it’s disappointing we don’t get more of it in Burying the Ex. This is a relationship movie that just happens to have a monster in it.

As a romantic comedy, it’s convincing. Yelchin, Greene, and Daddario all have an easygoing chemistry. Yelchin and Daddario’s scenes together are the highlight of the film as their attraction to one another is palpable. As for Ashley Greene, she certainly commits. Her performance is the biggest in the movie, but she still humanizes Evelyn.

While it’s a consistently charming movie, Burying the Ex never fully reaches it potential. It’s a very timid genre movie, which makes it a slight disappointment, but its missed opportunities are made up for with some good performances, plenty of jokes that land, and a well-told relationship story.

Burying the Ex is now available on VOD and in select theaters.