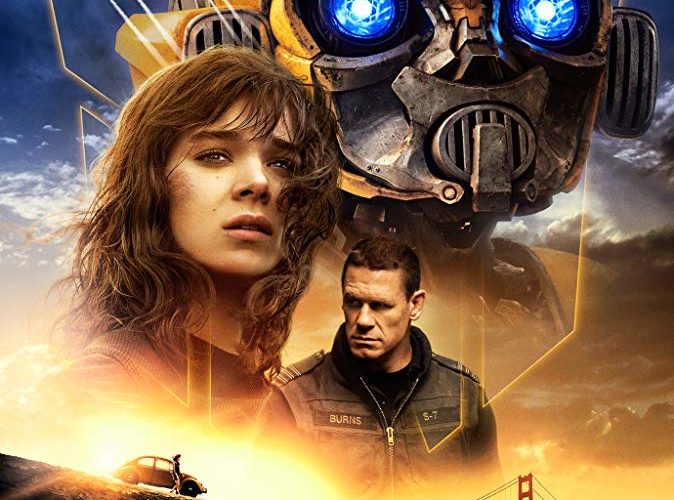 With Bumblebee, director Travis Knight and writer Christina Hodson weave together two different movies: 1) A sensitive, familiar riff on E.T. about a young girl who, struggling with the recent death of her father, regains her confidence through a clandestine friendship with an alien and 2) A less bombastic version of a Michael Bay-helmed Transformers movie, complete with Autobot vs. Decepticon lore, mechanical fight scenes with grinding metal sounds high in the mix, explosions, etc. To their credit, Knight and Hodson semi-seamlessly combine both movies without too much tonal clash. It’s just a shame that the end result never amounts to more than a “fine,” “not bad,” “better-than-mediocre” studio picture despite the talent involved.

The talents in question are Knight—current CEO and former Vice President of animation at stop-motion animation studio Laika, who served as the lead animator for the company’s first three films (Coraline, ParaNorman, and The Boxtrolls) and directed the fourth (Kubo and the Two Strings)—and lead Hailee Steinfeld, who has proven herself to be a formidable young actress this past decade. Their contributions certainly add a more intimate edge to Bumblebee, whose tender mood already sets it apart from the rest of the Transformers franchise. At the same time, neither really leaves their stamp on the work, either, beyond providing a generally less aggro atmosphere. Steinfeld, especially, disappoints in this regard. She’s too good for the material, which tackles the thorniness of grief with the broad tact of a bulldozer, and yet she frequently overplays the script’s emotional content, juking every contemplatively sad moment with crocodile tears so even the most stunted teenager can grasp her plight. Bumblebee is pitched to the cheap seats, which, granted, should be expected given that everything from the performances to the action must match the size and scale of the eponymous Transformer. It’s just a shame that the softer, Spielberg-inspired side of the script suffers as a result.

However, that part of Bumblebee nevertheless represents its most salient selling point. Hodson handles the day-in-the-life-of-an-80s-teen stuff fairly well and Steinfeld convincingly plays a rock ‘n’ roll kid, sporting Joan Jett-esque fashion, who’s a nerd in relation to her richer, more glamorous classmates (in typical Reagan-era, class-generated, John-Hughes-movie fashion). She has good chemistry with Pamela Adlon, who plays her well-meaning mother, and Stephen Schneider, her goofy stepfather. Her scenes with Bumblebee—who, in case you’re interested, travels to Earth following a nasty civil war on Cybertron to set up a new base of operations only to suffer grievous injury from a trailing Decepticon and subsequently transforms into a Volkswagen Beetle that Steinfeld’s character eventually finds—are cute enough, even though Knight and Hodson try to get too much mileage out of the contrast between his size and gentle disposition. The production team hits their period-era marks vis-à-vis fashion and design. The music department has fun with soundtrack, peppered with 80s hits like Tears for Fears’ “Everybody Wants to Rule the World” and Steve Winwood’s “Higher Love.” Bumblebee’s relationship with The Smiths, in particular, sticks out as an odd stab at personal authenticity within a slick enterprise. You won’t find a goofier invocation of “Girlfriend in a Coma” in any other film this year.

The actual Transformers business, on the other hand, never compels despite its relatively modest approach. While Bay’s Transformers films revel in crass CG imagery and volatile noise, Knight keeps the action somewhat restrained, which is superficially admirable, or at the very least A Choice. Yet, that same moderation only highlights the flimsy Hasbro-sourced mythology and the cheap good-vs.-evil mechanics; Bay’s punishing brand of visual and aural excess at least distracts from the silliness of the conceit. On top of that, Bumblebee continues to validate the series’ conservative pro-military ideology: John Cena, who plays some sort of military leader running some vague secret government agency, pushes for aggressive action against the foreigners (read: Decepticons) in their midst, but is stymied by the nebbishy, diplomatic scientist (John Ortiz) who trusts the aliens to use their powers for good. Guess how that turns out?

By the time Bumblebee heads into the home stretch, when it provides all the typical beats one expects from a Transformers prequel, plus an original song courtesy of Steinfeld, the whole project feels like a half-measure to modulate a stylistically immovable franchise. Bumblebee may sport a thoughtful character arc and a throwback vibe, but it’s not meaningfully different than the other five entries in the Transformers series. There’s still plenty of laughably stupid junk to wade through in order to find the good bits. Mileage will inevitably vary as to whether that effort will be worth it.