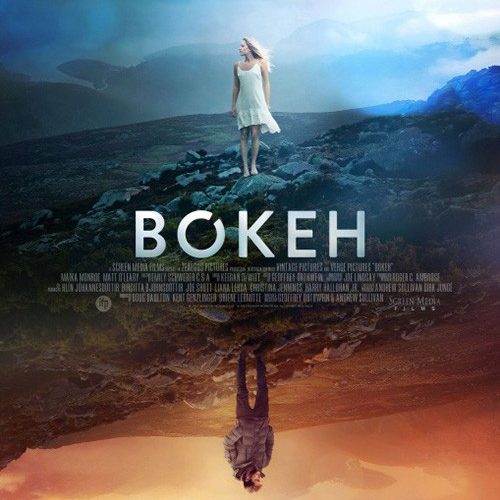 Review: ‘Bokeh’ is a Dramatically Empty Sci-Fi Drama With Glimmers of Beauty

At the beginning of Bokeh — the debut of writer-director duo Geoffrey Orthwein and Andrew Sullivan — an idyllic montage introduces us to a young couple (Maika Monroe and Matt O’Leary) traveling through a scenic Iceland for their five-day getaway. Accompanied by dreamlike music, we watch them pass by the gorgeous landscapes and cold tundras of this mysterious realm. And as the montage goes on, an issue starts to arise. Instead of feeling like we’re getting to know these characters, we, too, feel like tourists — not just to the lush Icelandic vistas, but to the characters themselves.

These opening moments, which should function as groundwork for a dynamic relationship, are stylized in such a way as to feel like a demo reel for an Icelandic visitation website — beautifully shot, but devoid of character. Throughout the rest of the film, Orthewin and Sullivan make the costly mistake of returning to this montage-heavy crutch, a choice that causes the entire narrative — and, in the process, any attempt at character development — to meander along without purpose or thrust. With this wandering still-life sensation, an hour and thirty minutes crawls along, and, like its titular aesthetic definition, Bokeh remains completely out of focus both narratively and thematically. I’ll say this, the catalytic event of Bokeh is compelling. Jenai (Monroe) wakes up during the night and looks out the window. Then it happens: a flash of light from an unknown source emanates in the distance, allowing for a beautiful shot of her face with the light reflected in the window. Hours later, she is woken by Riley (O’Leary) to an empty town. As their hysteria mounts — rather rapidly, I might add — the duo soon realize they are utterly alone. While this mystery as to what happened is a decently strong incentive to hang on for the ride, the helmers make the mistake of not attempting to create any sort of minor dramatic questions to keep the audience engaged on a smaller scale in the meantime. And once it becomes clear that the film has no interest in or intention to really try answering this big question, the audience is left with a collective shrug as to what is going on, what could happen, or even what should happen. By the time the last act arrives, it is hard not to feel like the events contained within should have happened in the first thirty minutes.

Because between those two timestamps, not much goes on at all. The continual use of montage makes it difficult to become steeped in the tactile environment that the characters are experiencing, or get invested in the minutiae of trying to survive or thrive alone in a massive landscape with dwindling supplies and a power grid running out of time. All this information is shoved heavily to the back-burner, forcing the audience to come up with scenarios of their own for potential conflicts that are never bothered with.

A perfect example is when Riley goes off on his own into a mall. Then he gets stuck in an elevator. In a moment where we could have an externalized conflict that simultaneously represents a thrust for the dramatic engine, while mirroring issues within the relationship, Riley pounds on the door. It opens. He walks out. The scene is over. There are countless instances of this throughout — little glimmers of plot, conflict, tension, or progression that are dropped instantly. When there are more traditional scenes, they are always made up of a stilted collection of interactions between the pair that awkwardly try to blend super-naturalistic acting with lines from the script seemingly delivered verbatim, all of which come off as preachy or false by contrast. This creates a sensation that not only breaks one from immersion, but makes the central relationship feel disjointed and forced.

Because of this lack of dramatic momentum, the elements of Bokeh that do work best — the occasionally enrapturing cinematography, the dreamlike score, and the interesting-but-overused experiential editing — all wear thin halfway through. What’s left is narrative incoherence, thematic inconsistencies, and two performances that feel like they have half a foot into commitment and the other shaking about frantically in under-development.