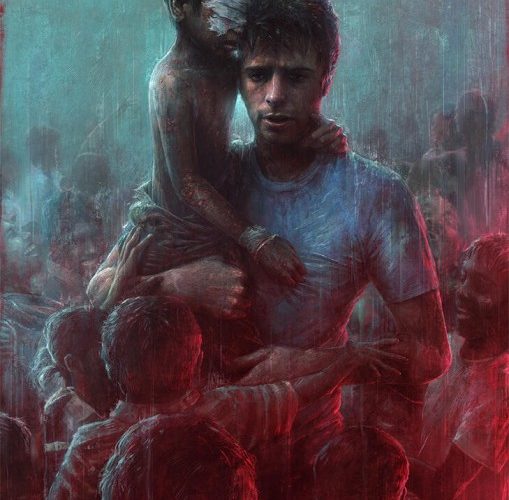 While finding one’s calling is easy for some and effortless for others, the rest may need to travel around the world before figuring out what truly gives them meaning. Robin “Rocky” Braat is one of these lost souls—an underachieving youth from a broken home who finally said enough was enough. Embarking on a search for “authenticity” that takes him to India, this wandering traveler discovers purpose in quite literally the place he least expected. Not fond of children or looking for more than a brief escape from the constraints of home, an AIDS orphanage in Chennai somehow changes his entire outlook on life and how he would live it. By opening his heart he became these children’s brother overnight, building a bond strong enough to put a smile on their faces during their most terrifying trials. Winner of both the US Grand Jury Prize and Audience Award for documentary at the 2013 Sundance Film Festival, Steve Hoover‘s Blood Brother is more than simply a look into the director’s best friend’s evolution from listless American to tireless supporter of those afflicted by one of our planet’s most heinous diseases all while living without running water in a Third World country eight thousand miles from home. As someone closer to Rocky than anyone—we’ll see how little his grandfather understands his decisions and how unreliable his sister can be—it’s also about Steve learning what took his former roommate away. Add the harrowing experiences of children doing their best to have fun despite needing a medicinal cocktail three times a day and you’ll be hard-pressed to leave the theater with a dry eye.

Most of the footage shot by Hoover, Phinehas Hodges, and Tyson VanSkiver occurs during their visit with Rocky three years into his relocation. Saddled with Visa troubles that forced him back to a US he no longer recognized, Braat finally cajoles Steve into coming to experience India for himself. It’s upon this return that we understand the power he wields over the kids, each one running to him for a massive group hug—their disease an afterthought no one but the newcomers acknowledge. The children know the difference between a Western tourist and someone who will give them his/her all. Rocky is the latter and more, battling with the decision to make Chennai his permanent home to devote his time and energy into the only cause he’s ever truly been able to invest in. The transformations these children undergo are heartbreakingly shown, uncensored to force us to comprehend the devastating emotional turbulence Braat endures daily. It’s not hard to imagine an introduction to young Surya giddily in good spirits and seemingly healthy while playing with Hoover’s cameras will soon turn into an eye-opening example of AIDS’ tragic horrors, yet you still cannot begin to prepare yourself for seeing the boy bed-ridden with skin sloughing off his sore covered body.

We watch Rocky’s complete and utter breakdowns—not only due to Surya’s hardships, but also the death of a young village girl named Vehmidi that plays out onscreen almost in full. We’re given a crash course into the power of public consciousness and the type of Indian religiosity that holds as much potential to harm as it does heal. Culture clashes with science as Braat second guesses his actions in the face of adversity, falling ill himself from the stress, all while Hoover and his crew experience the stakes of this situation first-hand with the dance between life and death fluctuating every hour, minute, and second without warning. This is Rocky’s day-to-day as he has become these children’s father figure despite having no legal ownership over their lives—but we know the truth and so do they. A big part of Blood Brother’s success lies in the personal connection between filmmaker and subject because Hoover possesses much more latitude to poke and prod Braat for answers to details that he may not have opened up about to a stranger. On the flipside too, it lets Steve get closer to Rocky’s work due to an investment that’s greater than merely crafting a good film. We hear as the director admits his fears and anxieties towards ignoring Western ideas of what AIDS is and his knee-jerk reaction to see all those infected as pariahs to keep distance between. He also acknowledges how watching Rocky wrestle with them, eat off their plates, and clean the blood from their scratches changed his heart and the film can’t help but do so for its viewers as well.

It’s a hopeful document as far as showing how one man can make a difference and that we aren’t prisoners to our birthplace but adventurers able to see the world and plant roots wherever it feels most comfortable. It’s also a relentlessly graphic depiction of a disease too many still take lightly as a problem they can ignore despite the numbers it kills every year. You will laugh at kids being kids, cry when learning that the first word in 24-hours Surya spoke while paralyzed in pain was “No!” to answer Rocky’s telling him he was going home to change, and become inspired by Braat’s compassionate empathy to stay despite only being a glorified volunteer. It’s a tale that speaks towards the human spirit and how the power of one man’s love can be stronger than an entire world’s ignorance.