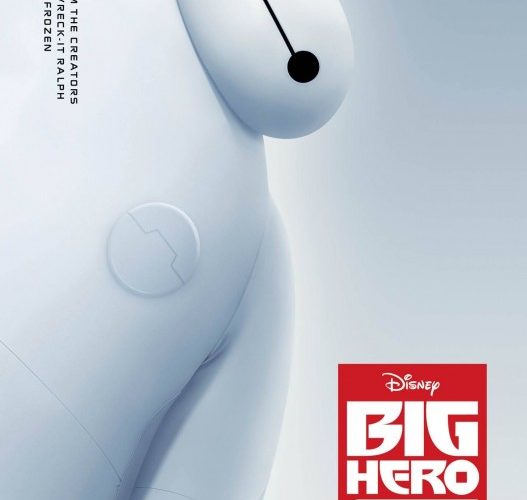 Many parents aren’t going to allow their young children to watch Marvel Cinematic Universe films—they skew older with dark underlying themes and comic book violence that (sometimes) leave certain characters dead. So while Disney’s purchase of Marvel gave them boundless raw material to use in order to capture the attention of teens and everyone older, the question remained whether Mickey and friends could find something in the extensive catalog that would be suitable for their target audience. On the surface Duncan Rouleau and Steven T. Seagle‘s Big Hero 6 isn’t the obvious property considering its canon includes Silver Surfer, a giant robot named Baymax who looks like Street Fighter’s Blanka, and a bureaucratically run troupe of secret agent superheroes, but it’s crazy how perfect for children it is with a little fairy dust magic.

Adapted by Robert L. Baird, Daniel Gerson, and Jordan Roberts from a story Roberts and Don Hall (who co-directs with Chris Williams) hatched, Disney’s incarnation proves to be a fantastic adolescent primer into the world of superheroes and villains. Much like Pixar did with The Incredibles, Big Hero 6 revolves around something even youngsters can understand: family. By focusing on children and the power they wield intellectually and emotionally, a group of college science nerds and the thirteen year-old genius at its center becomes overnight role models to an audience of all ages. The kids at my screening were invested at a level I haven’t seen in years, each one rooting for the titular heroes, lamenting the tragic backstory that brought them together, and reveling in the cute and cuddly robot infusing its brilliant comic relief throughout.

That robot is the aforementioned Baymax (Scott Adsit) only this time around he’s a giant blown-up vinyl health-bot programmed to heal whomever he comes into contact. Activated by the sound of a human saying “Ouch”, this charitable softy is the creation of hardworking science major Tadashi (Daniel Henney). Raised with his brother Hiro (Ryan Potter) by their aunt Cass (Maya Rudolph), Tadashi has grown into an altruistic soul willing to do anything for his fellow man. Along with perfecting Baymax in the lab, however, he also watches out for the too-smart-for-his-own-good Hiro. Graduated from high school at thirteen, Hiro can’t help himself from getting into trouble by using his intellect for adrenaline rush cons seeking financial gain. Older brother Tadashi is the only one able to convince him of the potential everyone else knows he possesses.

What surprised me most about Big Hero 6 was how much time is devoted to fleshing out these siblings’ relationship. We learn everything about what they’re made of and who they’re going to become. This is the power of storytelling Disney’s reclaimed this past decade after a stretch of subpar work—the ability to say so much so effortlessly. We witness the rebellious anger in Hiro, watch it matched—but not replaced—by his infinite wealth of imagination and smarts after applying himself to attend Tadashi’s college, and the intensely crippling sorrow overshadowing everything in a split second. The film therefore proves to be both the origin of a superhero and more importantly a mature boy ready to face the world with strength only love can provide.

At its backbone are a slew of comic book tropes laid out conventionally and in meta form courtesy of the college’s over-exuberant mascot Fred (T.J. Miller) opening his collection to excitedly call out stock characteristics so the most novice viewer can comprehend. Each science nerd’s school project quickly becomes their identities as a result like Go Go’s (Jamie Chung) electromagnetic bicycle providing her TRON-like speed skating prowess, Wasabi’s (Damon Wayans Jr.) laser grid slicers transforming into sword blades, and Honey Lemon’s (Genesis Rodriguez) chemically altering metallurgy giving her the means to fabricate balls of foam, ice, glue, etc. with the press of a few buttons. Add the sage teacher (James Cromwell‘s Callaghan) pitted against the cutthroat businessman (Alan Tudyk‘s Krei) who both vie for the students’ allegiances and everything great about Marvel is present in a kid-friendly package.

These children call it upon themselves to stop the evil Kibuki mask-wearing antagonist utilizing Hiro’s microbots to wreak havoc on the city and destroy all who cross his path. With their individual expertise and a baller 3D printer they even find a way to fit the harmless Baymax with armor and fighting skills to put his “able to carry a thousand pounds” strength to alternative use. It isn’t always pretty, but how would your first attempt at saving the world turn out let alone a sextet of teenagers and a pacifist robot? They must learn to work together, the value of human life’s true worth, and how to change their angle of perception to solve the problems ahead. Three valuable lessons I’d be surprised didn’t sink into every child in the audience considering their attention level.

Not only does the plot familiarize them with the concepts and lessons at the back of every great comic hero, but the aesthetic expertly infuses a bit of anime styling as well. Set in San Fransokyo, the amalgam of western and eastern sensibilities is a treat to all those able to spot the myriad details. The cityscape has a Blade Runner feel, Maneki-nekos populate the background of almost every frame, character design resembles everything from Paperman‘s Meg (Honey Lemon) to Gorillaz‘s 2D (Hiro) to The LEGO Movie‘s Wyldstyle (Go Go), and the eventual costumes each fabricates keep their feet firmly in the superhero oeuvre. Science fiction ideas like wormholes and technical terminology Hiro and the others talk about that went way over my head also arrive to drive home the point that smart really is the new “cool.”

To come right out and say Big Hero 6 is the toddler version of The Avengers wouldn’t be accurate, though, because that implies it’s unworthy of adults’ time. On the contrary, Disney’s newest animated movie is actually one of its most inclusive. Thin plot aside, there’s a complexity that transcends age to resonate with its audience through character development and familiarity. Its lessons and morality are its priority and the fun, humor, and excitement prevent them from being over-the-top and in-your-face. There’s just enough story to house this world and meet the characters inside. They are who we invest in, not the bloodlust or revenge threads pushing them to discover empathy and compassion. In the end it’s about learning to listen to our conscience and if doing so means personifying it as an adorable walking/talking balloon, I’m all for it.