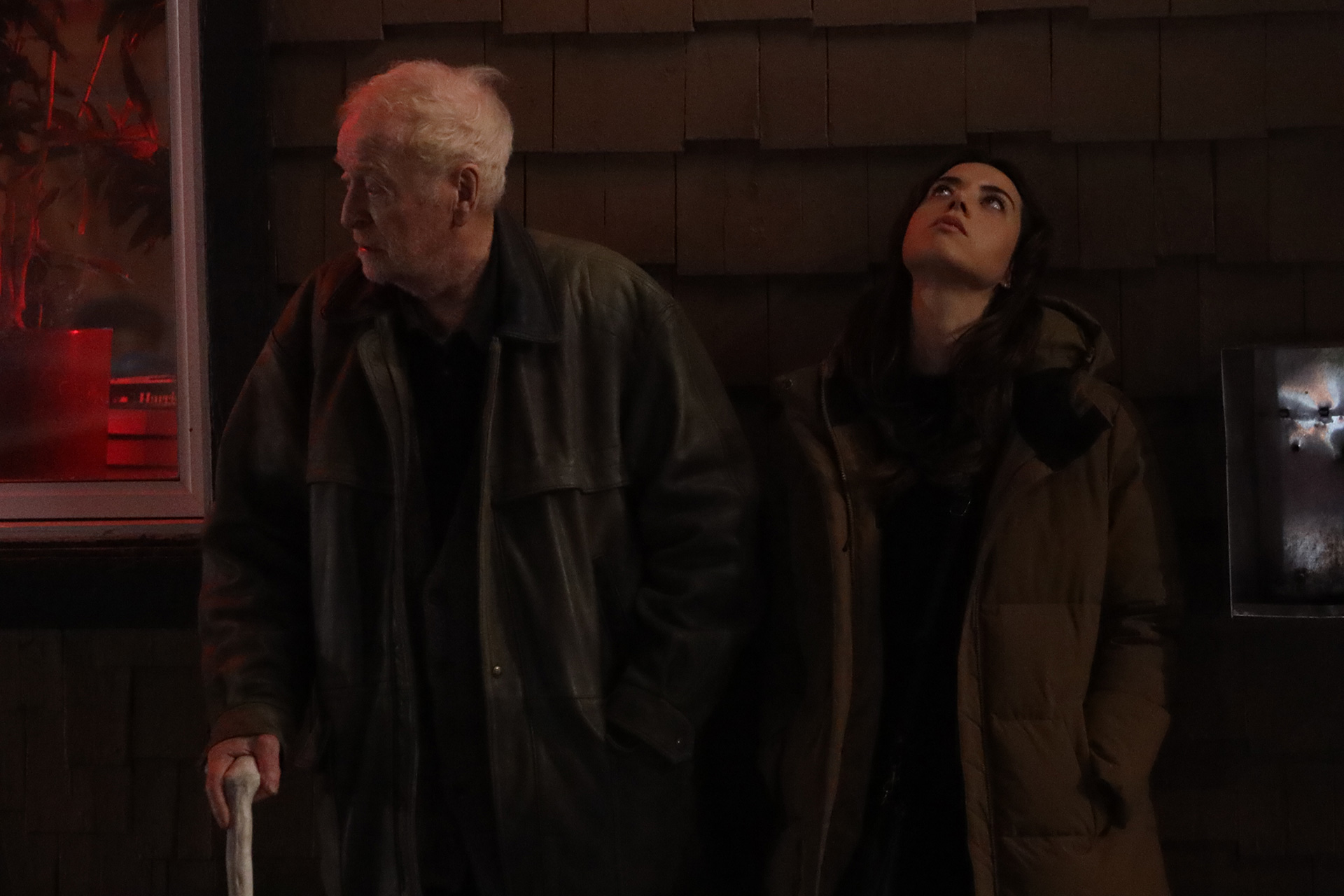 Harris Shaw (Michael Caine) is a writer in need of money. Lucy Stanbridge (Aubrey Plaza) is an editor/publisher in need of money. And it just so happens that a contract between him and her company is already on the books to provide some for both. There are a couple problems, though. Shaw hates people, press, and perhaps life itself, while Lucy is constantly being judged against her father (a pillar of the literary world who left her the shingle) and thus constantly disrespected. Does the benefit of teaming up outweigh the obvious issues? In the short-term, yes. If she agrees to not edit a single word he’s written, he’ll participate in her book tour. Unfortunately for Lucy’s sanity and bottom line, Harris never said he’d play nice.

Welcome to Best Sellers, Lina Roessler’s feature directorial debut (written by Anthony Grieco). We have the highly driven yet forever underestimated businesswoman who may just possess more talent than her father if people stopped judging her on nepotism, and the crotchety drunk of a genius who just might not be as ungrateful as he appears if anyone gave him the time to explain the cause of the bile in his gut. While you may expect their escapades to be crafted into an odd-couple romp, reality proves a bit less exciting. Shaw inevitably refuses to read from his sophomore novel (forty years since his first) before deciding to urinate on it instead. Lucy hopes “bad press is good press” until discovering meme-status doesn’t equal hardcover book sales.

And this continues for about half the film. It’s admittedly fun at first. Caine is having a blast swearing with a smile while hipsters chant “bullshite” as though it’s a wholly unique catchphrase the world has never heard before, and Plaza is effectively portraying “harried” as her career implodes around her despite growing social-media trends. The problem is that we know there’s more yet to be mined. The way Harris keeps apologizing to his late wife Elizabeth infers upon dramatically weighty reasons for his disorderly conduct; Lucy’s willingness to flush her own money down the toilet to try proving herself through (and to) the author that made her father’s name reveals motivations beyond increased wealth. I only wish Roessler and Grieco got there quicker.

The reason is simple: the last thirty to forty minutes of Best Sellers are really good. I’m talking night-and-day by comparison. Enough that I do believe they save the whole from being a laughably derivative comedy with zero stakes. Where the beginning relied on glorified cameos as a supporting cast to provoke hollow intrigue (Cary Elwes’ gay caricature and Scott Speedman’s is-he-trying-to-buy-Lucy’s-company-or-get-in-her-pants rival), the end lays hearts and souls bare to the point where no one besides Caine and Plaza is necessary to sustain our interest. All we needed was Lucy to live up to the reputation her assistant (Ellen Wong’s Rachel) knows she has and finally force Shaw to acknowledge her worth beyond a silver spoon. Once they escape their thin-skinned façades, everything starts clicking.

It’s not like their anger levels weren’t high enough to break through earlier, either. We didn’t need to watch them hit three bars (the bookstores all cancelled after Shaw assaulted Elwes’ critic) before their adversarial rapport bore fruit. Let Lucy use her impeccable credentials to think outside the box—the script’s idea that a thirty-something executive we’re supposed to believe in would be naïve enough to think YouTube likes are a barometer for book readers is mindboggling—and earn Shaw’s attention before we stop hoping the film will ever escape its one-note plotting. Because even after she gets him talking to her like she’s a real person, animosity remains. Make the whole movie about the evolution of that entertaining tit-for-tat rather than the five minutes before their thaw.

That’s when we discover the reason for his exile and her talents as an editor when she can sink her teeth into a manuscript. (Not that I condone the film’s rather denigrating and reductive dismissal of Young Adult fiction as an inferior genre by way of making it what Lucy ultimately staked her fledgling business on.) Hidden truths that make complete sense are revealed without fanfare beyond the heartbroken reality of the pain produced, and suddenly all that talk from Speedman about “preserving” Lucy’s father’s legacy switches from a slight on her capabilities to a much broader treatise on how many of America’s empires were built upon the labor and talent of those denied credit. It’s a theme that deserved more than being mere background dressing.

Its mere existence is a win, though. As is its ability to galvanize Lucy and Shaw’s relationship to help steer them through a third act that resonates on a frequency the rest couldn’t approach. It’s a testament to Plaza and Caine’s performances, too, since they are finally able to shake free of the hyperbolic hamming and prove why they were cast in the first place. Hers becomes a role about empowerment and confidence, his is revealed as the heartbreaking fight-or-flight adrenaline rush of a depressive who’s lost all the hope and trust he had for artistic integrity surviving the capitalistic boon of content over merit. Roessler receives their best as the story shifts from easy jokes to appearances-are-deceiving profundity that does rise above its package’s conventions.