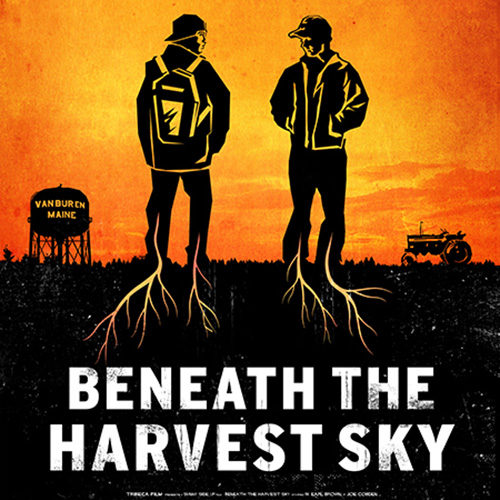 [Review] Beneath the Harvest Sky

A movie doesn’t always have to be one hundred percent unique to prove effective if those involved propel it above cliché through authenticity. Writer/directors Aron Gaudet and Gita Pullapilly‘s Beneath the Harvest Sky is a prime example, seemingly familiar from frame one and yet still resonate. You have your down-on-its-luck town on the Maine/Canadian border, its thick-as-thieves high school friends (one a bruiser the world dismisses, the other a kid with promise) planning a post-graduate escape, and the rampant drug trade threatening to consume them both as they’re about to leave. Every move made is obvious, but the filmmakers and cast make it all appear as though part of a natural progression towards a hope sprung from tragedy. And while we’re never surprised at the outcomes, we’re satisfied because few if any notes ring false. Beginning as a research venture into the illegal prescription drug trade of this region (Maine being the number one US state per capita for its abuse), Gaudet and Pullapilly settled upon teenagers Casper (Emory Cohen) and Dominic (Callan McAuliffe) as our entry point. The title’s blatant metaphorical structure aside—taking place during potato harvest season wherein farmers kill potato flowers with pesticide so nutrients can advance down into the tuber—we understand the dynamic and relate to each boy’s plight. Casper can do no good, knocking up his fifteen-year old girlfriend (Zoe Levin‘s Tasha), thieving for his criminal father (Aidan Gillen‘s Clayton), and getting into trouble for fun inside school and out who needs love, respect, and purpose. Dom is the golden child, flourishing on his own yet constantly dragged down by loyalty to his friend.

It’s the latter that’s hatched their escape, saving the money he’s earned harvesting potatoes with local farmer George (David Denman) the past few summers to buy a car and drive them both to Boston for a fresh start. Having seen this story countless times, however, we know in our hearts Casper only goes along so his friend won’t give up the dream. He knows like everyone else that his future is following dad and uncle (Timm Sharp‘s Badger) into international drug trafficking, so he pushes Dom forward as a last act of protection to ensure one of them has a fruitful life. The writing’s on the wall early, though, that these boys will be forced to make the hard choice of survival or destruction and we know the flower and tuber are never found standing together at the end. While it could have been depicted succinctly and by the numbers television melodrama style, Beneath the Harvest Sky takes a Winter’s Bone trajectory instead to show what it’s like to live in this world rather than simply watch two writers play within it. This is key to Gaudet and Pullapilly’s goal of illuminating social issues we aren’t fully cognizant of through story because we care for these boys as more than mere pawns. Casper is never completely painted as the hardened screw-up he’d like us to believe courtesy of his interactions with Dom, his sticking by Tasha’s pregnancy, and his frustration in adult preconceptions of him sight unseen. And Dom perpetually wrestles with expectation and dream, loving Casper, Emma (Sarah Sutherland), and the idea of freedom as he toes a precarious line until fate intervenes.

The actual plot working towards that end—one raking in dough helping to collect drugs from elderly who’d rather sell pills than use them and the other participating in hard manual labor each day—therefore gets little actual screen time. It’s only there for us to enter their lives, to watch them on their own terms devoid of reputation or rumor. Casper’s father is proud and easygoing towards him because he wants to recruit another soldier into his operation; Dom’s mother (Carla Gallo) is strict because she works everyday herself to support the family and knows squandering opportunities for success isn’t an option he should consider. Romance also presents itself to the boys as twisted manipulation, comforting companionship, or pragmatically physical, playing with their psyches and constantly giving them pause about whether to stay or go. Both Cohen and McAuliffe shine as these complicated souls going through the motions and oftentimes finding their attempts to break free helping to place them on the road everyone thinks they deserve. They are seventeen-year olds having fun with potato guns, learning responsibility—yes, even Casper doing illegal activities—and growing up quickly in a short period of time. And duplicity of character is rampant around them whether by Sharp’s Badger getting caught up with MDEA Agent James (Delaney Williams) or Sutherland’s Emma desperately trying to connect with Dom despite knowing his goals don’t align with her own of college in Vermont. So while Casper and Dom are built to be stereotypical selfish teens looking out for number one, the fact they’ll do anything for the other proves they’re the most selfless of the bunch.

Gaudet and Pullapilly ensure everyone’s trajectory gradually converges by the end in necessary tragedy because how else are lessons learned? The aesthetic is realistic from broken down homes; abandoned hideouts; thick, Canadian-esque accents; and a general dirt/grime covering legitimate businessmen (farmers) and illegitimate ones (drug dealers) alike. It’s a world its inhabitants know, one that will continue its deplorable conditions and amoral streaks regardless. And like every story of its kind, good souls get caught up with the bad at the perfect storm of consequence. Like the flower and the tuber, not everyone’s made to survive the harvest. Sometimes it’s the beautiful one, sometimes the well-meaning parasite. Sometimes the misguided matures as the charmed loses his way. All we know for certain is that it’s happened before and will most definitely happen again.

Beneath the Harvest Sky is now available on VOD and hits limited release on Friday, May 2nd.