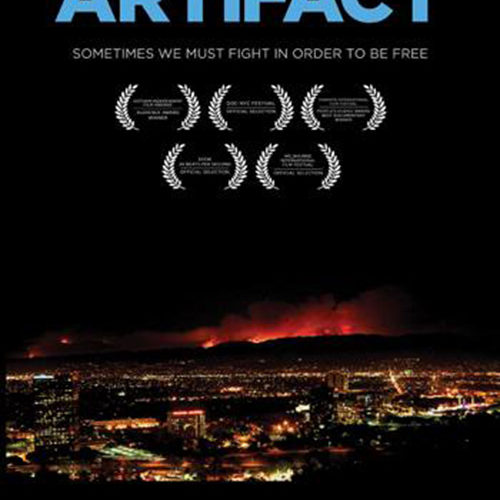 To disclose my feelings on Thirty Seconds to Mars off the bat, I’m a huge fan of the band. When “Capricorn (A Brand New Name)” hit the radio waves, I was sold—not yet aware Jared Leto was the frontman or that the music wasn’t just another lame attempt by an actor to delve into another industry he/she knew nothing about. I torrented the disc, played it heavily on my iPod, and eventually purchased it as my way of saying they earned my support. I attended an Our Lady Peace concert solely to hear them open (bad acoustics made the experience less than memorable), gave them a second shot during their headlining return (a killer show), and went once more years later when touring their third album This is War. Despite all that, I’m still pretty confident Artifact‘s success goes beyond fan service. It was hard for me to believe at first, too, with the many behind the scenes factors skewing preconceptions in the opposite direction. For one, it began as a process documentary depicting This is War‘s genesis that probably would have been at most an extra on the album. Secondly, its People’s Choice Award victory at the Toronto International Film Festival was easily due to die-hard fan voters rather than its deserving quality. (I know this first-hand after watching the Twitter-verse take my tweet about Leto’s performance in Dallas Buyers Club to insane levels of circulation this year.) And thirdly, while I understand a pseudonym is necessary for a guy like Leto to prevent celebrity from clouding people’s judgments, seeing Dr. Seuss‘ Bartholomew Cubbins credited as director rather than him was mildly disconcerting.

I worried about these things as a fan, but also as a film writer—one who knew the documentary’s path changed into the David and Goliath story pitting the band against EMI records after the label filed a thirty million dollar lawsuit for breach of contract. There’s just this stigma about music documentaries that sadly can’t be avoided until you actually sit down to watch—a notion it’s all an elaborately produced advertisement that only the people who don’t need to be sold will see. Artifact exceeds such categorization, though, because while it still shows Jared, Shannon Leto, and Tomo Miličević recording the music amidst chaos, it’s also a captivating look inside a dying industry’s last-ditch effort to turn a buck by alienating the very people they rely on to do so. I enjoyed seeing the boys horse around as a fan, as well as talk about their origins and how the band provided a venue to express themselves, and their interactions in the studio constructing songs like “Kings and Queens” and “This is War.” But as a music fan it was even more intriguing to hear other artists talk about their relationships with labels (Linkin Park‘s Chester Bennington, Incubus‘ Brandon Boyd, and OK Go‘s Damian Kulash) as well as former EMI executives Jason Flom and Lee Trink explaining how negotiations with Leto went from friendly to litigious once Terra Firma’s Guy Hands took over with a cutthroat attitude. The sort of detail in play thanks to over three thousand hours of footage taken between 2008 and 2009—including unedited telephone conversations—makes this a relevant companion to Alex Winter‘s Downloaded.

Where Winter documents the record companies’ inability to evolve with new technology and instead seek to destroy the people needed to buy their product, Leto shows the step that followed this initial defeat. Artifact gives struggling artists trying to earn a living a voice—Thirty Seconds to Mars was in debt to EMI for almost two million bucks regardless—while the labels do everything in their power to enslave them. With an animated infographic explaining the financial timeline of a band’s career and an introduction to the insane concept of a 360 deal wherein labels take a cut of avenues once reserved for the artists to earn the profit they don’t selling records (touring and merchandising), the dream of becoming a successful musician under the current state of affairs is all but dead. And to Leto’s credit, he doesn’t just rely upon his own experience to prove this. While Hands declined an offer to be interviewed, Flom, Trink, and another EMI casualty in Angelica Cob-Baehler chose to speak. They give us “The Man’s” perspective while the band and agent Irving Azoff share the artist’s side. The unavoidable truth of it all becomes how similar what they’re each saying is. Linkin Park and OK Go are only two of many bands that sued their labels or quit when able due to something explained as the “seven year rule” in contract law—the others not limited to Smashing Pumpkins, Radiohead, and even The Beatles. This isn’t an isolated case and Leto’s exposure to their horrors drives him towards a desire to finally be the one that exposes the injustice in court.

If you’re like me and own This is War, turning it over to check for a producing logo provides the answer to the film’s looming question of whether they’ll re-sign with EMI/Virgin or go it alone. Not solely their personal story, though, the film portrays a universal experience of their peers without the need of a courtroom. The simple fact Artifact exists to talk so candidly against an industry they all still need today to acquire international exposure and name recognition is a victory for the little guy. Because no matter what you think about millionaires whining about billionaires being mean, bands like Thirty Seconds to Mars are as much the little guy as us. They are creating something we consume—touching hearts and souls in the process—and they deserve to be compensated accordingly.