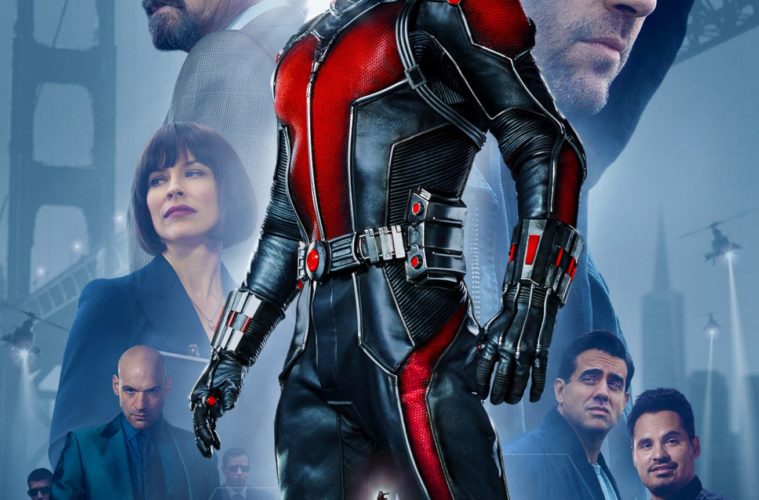 Having continually proven that they can repackage the same general structure and archetypes into their cinematic universe for increasing box-office returns, Marvel’s impetus to think completely outside the box is not strong. With varying creative results, Guardians of the Galaxy proved that the right ingredients in the formula can result in an entertaining ride, while the over-stuffed Age of Ultron did little more then exhaust. Their latest entry, Ant-Man, skews closer to the former in terms of being unburdened by an overarching, multi-film narrative, instead carrying a sense of genuine adventure. Delighting with inventive setpieces and an affable lead in Paul Rudd, Ant-Man is eccentric enough to amuse, but can often feel watered-down in execution.

We first meet Scott Lang (Rudd), a thief estranged from his daughter, as he finishes up a prison sentence. Finding it difficult to secure a job (evident in perhaps the film’s funniest sequence, featuring a Gregg Turkington cameo) and not being able to pay for the child support required to have a relationship with his daughter, he decides to buy into a tip from his friend, Luis (a scene-stealing Michael Peña), about a potential robbery. The targeted safe in question belongs to Dr. Hank Pym (Michael Douglas), a reclusive, once-prominent genius who developed the science that can make a human transform into the size of an insect.

The technology is now being mirrored by Darren Cross (Corey Stoll), the man who took over Pym’s company and a blandly stock villain character attempting to use it for nefarious means. After Lang’s robbery leads him straight to Pym, who’d intended from the start to take the criminal under his wing and transform him into Ant-Man, the two embark on another heist to take down Cross’ company and, as these things usually go, save the world from all-out destruction.

While on paper this could lead to a convoluted escapade, Ant-Man is surprisingly streamlined and refreshingly small-scale. It’s no secret that Edgar Wright departed this long-gestating project late in the game, leaving a script (co-written with Attack the Block helmer Joe Cornish) to be reworked by Adam McKay and Rudd, with Peyton Reed stepping in to direct. Wright’s brand of oddball comedy can still be felt in some of the action sequences and exchanges of dialogue, but Reed brings decent energy to the proceedings and, in one particular, even daring third-act sequence, some genuine vision.

As great as Rudd can be in the simplest scenes that only require his exemplary comedic timing, much of the humor here feels stilted, as if racing to the next scene holds priority over letting the comedy, which itself feels neutered, naturally play out. (If only David Wain held the reins.) Rather than dialogue, it’s sight gags dealing with perspective — showing the real-life stakes compared to the micro-sized battles playing out — that deliver some of the finest, most bizarre moments relating to scale since Honey, I Shrunk the Kids.

There’s an immediate, visceral thrill to the stand-alone setpieces when our lead shrinks down to either discover his new point-of-view or fight baddies; too often, however, the effect is the equivalent of sitting through a video-game cutscene. And, despite their basic dose of amusement, the many training montages Lang endures feel to have been for naught when quick barrages of life-size action interspersed with pre-programmed visual-effects sequences of an ant-sized Lang are all that we’re ultimately served. One wonders what could have been if more tangibility and formal heft was given to these attractive, but ultimately weightless passages.

As origin stories go, Ant-Man checks off most of the formulaic boxes — self-discovery, redemption, conniving villain, obligatory romantic subplot (Evangeline Lilly taking the burden here), and the promise of something greater to come — but Reed moves things along at a fast, often unique clip that shouldn’t leave one too upset at the lack of any lasting impression. Despite jettisoning exterior plot devices (the few Avengers tie-ins feel fresh, and there’s not a single reference to an Infinity Stone) as some sort of required center, Ant-Man doesn’t break as much new ground as it could have. What remains is nevertheless a light-enough affair aware of its own inherent silliness to make for one of the more humorous superhero births in the Marvel series.