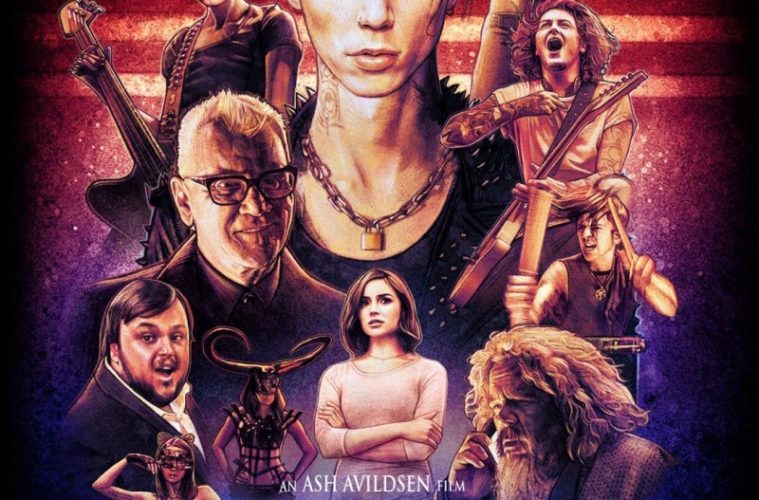 Review: ‘American Satan’ is a Nightmare of Sex, Drugs, and Heavy Metal

American Satan is the kind of film that might very well pop up as an Alamo Drafthouse Weird Wednesday screening in the coming years. It’s a shame its distributor will probably not strike a 35mm print for the occasion. The film is a maddening hyper-nightmare of smoke, hypodermic needles, and hard rock that somehow is far more endearing than it ought to be, with a cast led by musician Andy Biersack as Johnny Faust, a recent high school graduate from Columbus, Ohio who lands in LA seeking fame and fortune. Johnny and Vic (Booboo Stewart) fortunately have a plan: they hook up with UK-based group The Relentless — who’ve also come out to LA seeking fame with manager Ricky (John Bradley) — and add a sexy rebel Cassandra (Tori Black) to the group. Pure talent isn’t enough as Johnny learns the hard way and soon the group finds themselves in the crosshairs of label owner Elias (Mark Boone Junior) and the devil himself, Mr. Capicorn (Malcom McDowell) who offers the band a shot with strings attached.

Playing like a fever dream combined with a biting commentary of the music industry as a band struggles to make it, American Satan initially has fun with the concept. Elias warns Vic if he’s not careful he may one day find himself working at Guitar Center at 40 after failing out of clubs along Sunset Boulevard. Where the film has a tendency to run off the rails is when the devil’s influence grows as the music builds darker, consuming a guy with a decent heart who hurts those back in Columbus that were there for him. Denise Richards, no stranger to B movies, plays Johnny’s mother whose success in battling cancer correlates to just how happy Mr. Capricorn is at that moment.

Bookended with quotes from various rockers, the film offers pulls no punches in commenting on the business, from the club scene to the record labels, as certain needs are met to keep both artists and fans happy at any cost. The critique of cultural norms throughout the country, where the group hits a roadblock in Indiana, falls a bit short, especially given the polarized national climate the film is finding itself released in. However, it largely succeeds in the tradition of psychedelic rock-n-roll musicals like Ken Russell’s Tommy, particularly in a metal-infused age of social media where everyone wants a piece of The Relentless, from obsessive fans, jealous supporting acts, record executives, the media, and ultimately the devil in various forms.

While not breaking any new ground in the genre, American Satan is a stylish psychedelic thrill in the mold of a zany comedy that grows dark, quickly. Effectively handling tone shifts, it offers something midnight movies rarely have: a complete character arc that takes its premise seriously as Johnny Faust’s deal with the devil takes him further down the rabbit hole. The second feature from director Ash Avildsen (son of Rocky director John G. Avildsen) is equal parts sex, drugs, and heavy metal, an odd beast that grows darker and more twisted as the party ends, the ugly lights come up, and everyone has to go home after falling for grace.