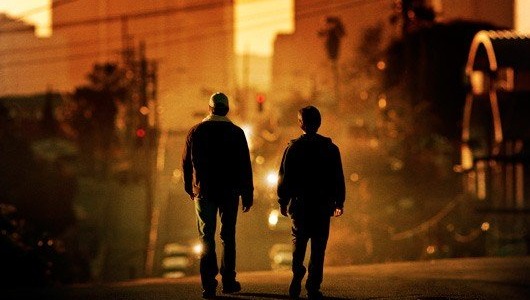 The idea of an “American Dream” is predicated on the idea that we all live in the same America. A Better Life, the new film from director Chris Weitz (About A Boy, New Moon), gives us a glimpse into the life of a Mexican father who has crossed into America and tried to establish himself in our country. Far too often this sort of story is told from the top-down as a political issue, starring facts, figures and xenophobia. It’s a pleasure to see this from a more humane point of a view. Although, to be fair, maybe “humane” isn’t the right choice of words for the characters’ existence.

Carlos (Demian Bichir, in a knock-out performance) is stuck in an relentless cycle. He works seven days a week as a landscaper on some of the nicest homes in Los Angeles, only to return to his ramshackle home in time to crash on the couch in his work clothes while dogs bark in the distance and police helicopters chop away overhead. Every day that he is driven home by his boss, Blasco (Joaquín Cosio), he watches as the houses get dirtier, the neighborhoods get rougher and the future becomes more bleak. No wonder he doesn’t fret when hanging from giant palm trees as his job calls him to do; he’s been working without a safety net for years.

All of this time working to support the family leaves Carlos from actually spending time with his son, Luis (a capable José Julián). It doesn’t help that the boy is in middle school, a time where children turn into animals before they become young adults. Like any true American kid, he is upset with what he has and laments what he lacks, looks at his father as an embarrassment, and is so awash in change that he isn’t always sure where he is or where he’s going.

Luis carries a grudge, and it’s hard to see why not. His aunt left the home to start a family, abandoning him just as his birth mother did. His school looks like a prison instead of merely feeling like one. He’s set adrift by his family, his country, and his school. When his anger gets the best of him and he’s arrested by one of the on-duty cops at his school, they’re shocked to see that he isn’t yet tatted up. He’s currently a blank slate, but he’s quickly being courted by his well-connected girlfriend Ruthie (Chelsea Rendon) and his friend Facundo (Bobby Soto), who looks more choir boy than thug. Ruthie enjoys the spoils that come from a life of crime; the consequences of that life are quietly swept under the plush rug.

The father tries to be honest, forthright, do the proper things and expects that to come back to him. His son is far too jaded and realistic to imagine that these methods work. They are reflections of their upbringings, their ideas of America. The father sees it as an exercise to better one’s self. If you put the work in, it will eventually be repaid. The son realizes that in a world of takers, the man who offers grace is the first one who gets preyed on. This optimism is repaid when Blasco offers to sell his truck and equipment to Carlos start his own business. However, this gift from above quickly turns into the family’s undoing.

A Better Life is capably directed by Weitz from a strong script by Eric Eason (based on a story from Roger L. Simon) that wears its heart on its sleeve a bit too obviously. It’s one thing to hear a disconnected father struggle in communicating with his son and end up speaking on the nose, it’s quite another when the son reciprocates with the same blatant dialogue; he should know better. It’s by no means a happy movie, nor should it be, given the  circumstances of the characters depicted. However, it seems to almost revel in this unpleasantness, leaving a well-crafted, wonderfully acted film to feel much longer than its roughly 110 minute run time.

Towards the second half of this film, it turns into a maudlin exercise of plate spinning. I became occupied with when the plates would fall rather than involved in figuring out how. But they do a great job in affecting me when they are finally smashed to bits, a credit to filmmaker and cast.

A Better Life opens in limited release on June 24th.