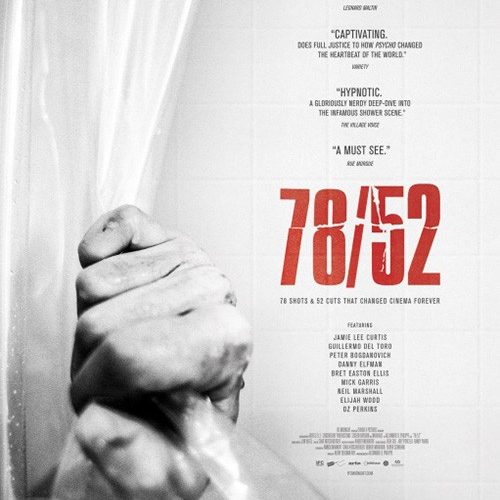 Review: ’78/52′ is a Meticulous Examination of One of Alfred Hitchcock’s Most Iconic Scenes

Alfred Hitchcock’s Psycho premiered in 1960, quickly becoming a massive box office success, as well as a critical darling with the press. In the passing decades, it’s become known as one of the greatest and most influential films ever made, the rare violent slasher movie to accompany titles like Casablanca and Gone with the Wind on best-of-all-time film lists. The most talked-about element of the film, aside from the twisting nature of the plot, was undoubtedly the murder of Marion Crane, played by Janet Leigh, in her shower at the Bates Motel. In Hitchcock’s filmography, Psycho came immediately after the star-studded, glossy Hollywood sheen of North by Northwest, a positively safe studio choice by comparison with the black-and-white slasher picture. The film was almost uncharacteristically vicious for Hitchcock in its portrayal of violence, a fact which only added to Psycho’s impact with audiences.

78/52 is an engagingly nerdy documentary look at that shower scene, from every conceivable angle, including observations from pop culture elite such as Peter Bogdanovich, Guillermo Del Toro, and Walter Murch. Whether we needed a feature-length examination of the shower scene in Psycho is irrelevant. We’ve got one, and it isn’t bad.

When it’s not lingering on digitally-shot recreations of moments from Hitchcock’s movie (intercut with scenes from the actual film, shot on celluloid, which blend like oil and water) the woefully titled documentary transcends its DVD bonus feature potential, becoming a nearly essential companion to the suspense classic. The title 78/52 refers to the 78 setups and 52 shots comprising the shower scene, which unravel across only 45 seconds of screen time. The majority of the subjects interviewed bring wit to their observations, while some of the talking heads resort to rambling conjecture and speculation. Notably, Elijah Wood doesn’t bring much to the discussion.

Director Alexandre O. Philippe’s meticulous research gathers hundreds of movie geek tidbits, contextualizing every moment in the film, readying the audience for the documentary’s centerpiece: a deconstruction of Janet Leigh’s shower scene. This scene was one of the first examples of horror violence in mainstream cinema conceived and grounded in a sense of mundane reality. Hitchcock thumbed his nose at the en vogue atomic age horror monsters of the ’50s in favor of a chilling reminder that we’re not even safe at home in the comfort of our bathrooms. In fact, during the first week of Psycho’s shooting, the murders portrayed in Truman Capote’s In Cold Blood took place in Kansas, in which the Clutter family was murdered, shot-gunned, in their home in the middle of the night. The scene’s impact left audiences uttering jokes about feeling afraid to shower after seeing the film. As sound designer Gary Rydstrom points out, the scene forces every audience member to become Janet Leigh in that shower, “only less attractive.”

Hitchcock and designer Saul Bass pre-visualized the shower scene with detailed storyboards, framing each shot in their heads dozens of times over before committing it to celluloid. The scene was even filmed separately from the rest of the production, over the course of seven days with an almost obsessive attention to detail. The documentary opens and closes with Marli Renfro, Janet Leigh’s body double for the shower scene, the unsung hero of Psycho, who’s naked body became the canvas upon which the bloody scene was painted. She remembers the shooting of the sequence as particularly grueling, as much of her performance involved playing lifeless and dead, twisted into increasingly uncomfortable positions as the days went on. Renfro’s touching hindsight perspective is surprisingly upbeat and rather proud, considering the nature of her role in the film. Rewatching the film almost 60 years later, Renfro laughs as Norman Bates places Marion into the trunk of the car: “And there I go,” she says. “That’s all of me.”

The documentary also touches upon the notion of the all-American mother, a universally beloved and utterly benign figure in pop culture in the ‘60s. Hitchcock’s film upends this image with the twisted relationship between Norman Bates and his mother, meanwhile burying the notion in the film’s subtext and themes. The detrimentally fawning influence of mothers features prominently in the lives of almost every character we meet in Psycho. Marion Crane talks of having a respectable date with her adulterous boyfriend, complete with “mother’s picture on the mantle,” minutes before Crane’s co-worker mentions that her own mother gifted her tranquilizers for her wedding night. Hitchcock’s film is beautifully crafted with subversive nuance, and yet, most audiences tend to take these elements for granted, distracted by the lurid details of the sex and violence simmering on the surface.

While some of the interviewee’s anecdotal digressions overlap with stories presented in the book and subsequent film, Hitchcock/ Truffaut, stunning archival material and a quick pace more than make up for these repetitions. At times, the film does morph into a gooey love letter to Hitchcock and his film; deservedly so, in some cases. But too often, we’re left with an arguably less-than-great artist (Eli Roth? Mick Garris?) in talking head form, blandly praising Hitchcock’s work. 78/52 is at its best when the shower is running and we’re engaged with the making of this notorious murder scene.