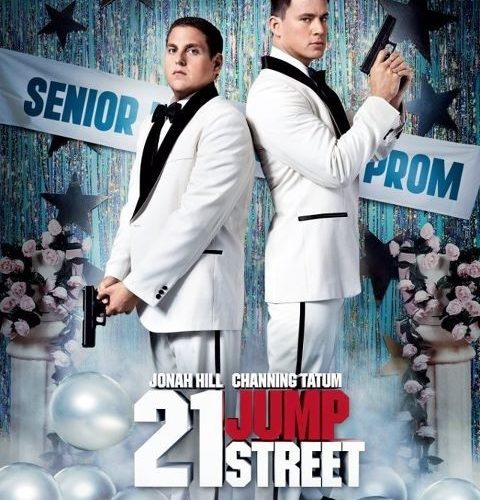 Screenwriters Michael Bacall and Jonah Hill made the right move when they decided their 21 Jump Street would be a continuation of the original television series and not a remake. They may go a bit heavy on the pseudo-meta scripting of characters mocking the fact that their police department can’t come up with any good new ideas so they have to rehash what worked and hope no one notices, but it succeeds in letting me forgive the unoriginal genesis and enjoy its newly created offspring. This isn’t your older brother and sister’s “21 Jump Street”—it isn’t old enough to say Mom and Dad’s—as there is a lot of swearing, a ton of sexual innuendo and its fair share of stupidity. These boys didn’t earn their undercover work this time; they were exiled to it. As fresh-faced as you could hope — though the joke about how Channing Tatum’s Jenko looks like a forty-year old man is funny — our newly-graduated police officers are immature, temperamental and two disparate halves of what one good cop should be. Hollywood coincidence shows the “cool” Jenko and “nerd” Schmidt (Hill Version 2.0) moving from opposite sides of the high school spectrum to grown-up adults acknowledging the others’ strengths. A mini-flashback setting up an obnoxiously obvious quest to go to the prom they missed as teenagers shows how they were actually in the same grade to start and therefore will eventually overcome childhood stereotypes to delve directly into the adult ones of becoming friends with the person they once deemed an arch-nemesis.

But as Captain Dickson (Ice Cube) so astutely relays in one of his angry black cop rants, stereotypes are the name of the game here on Jump Street. The rub, however, is that although only seven years have passed, the sociological patterns of senior high have evolved exponentially. The “green,” caring, and hard-working portion have become the cool untouchables who now look at the jocks with wrinkled noses and an air of superiority. This fact confuses Tatum while the science nerds remaining status quo comforts him and a couple new entries into the melting pot become completely indecipherable—read hipsters and anime club. As it is, though, the likelihood of Jenko and Schmidt’s ‘besties’ devolving back into past petty rivalry still runs high. Only this time it’s in the geek’s favor.

Tasked to infiltrate a drug ring as brothers, the boys find themselves living with Schmidt’s parents and reliving the adventure of adolescence with varying degrees of déjà vu. The same imbecilic mind that can’t retain the Miranda Rights of Tatum accidentally switches their covers so that he becomes enrolled in AP Chemistry and Hill onto the track team and drama club. It should be a classic case of backfiring switcheroo except for the changed dichotomy of high school allowing such a snafu to be possible. Hill’s Schmidt becomes the toast of the town with his awkward ability to be self-deprecating and Tatum’s Jenko finds the wondrous world of blowing things up with science a perfect release for his simpleton character. Bacall and Hill have gone above and beyond to create an environment for their characters to shine with a kick-ass kegger, school play rehearsals, and the hilarious ‘dress up as your favorite molecule’ gag in Chem class. Directors Chris Miller and Phil Lord, of Cloudy with a Chance of Meatballs fame, keep the aesthetic authentic and really do a great job separating the microcosm of teenage life and the dark, scary world of biker gangs and freeway chases with the potential of fiery death. Their portrayal of the drug-at-large H.F.S.’s four-stage effect on the body is a laugh-riot and the lengths they go to show how comfortable Schmidt and Jenko have become together is good fun with the occasional gross-out task like fingering each other’s mouths.

A fun supporting cast rounds out the antics with DeRay Davis‘ bad-ass street thug creating a pretty volatile foe and teachers Rob Riggle and Ellie Kemper adding laughs by both engaging the ruse’s implausibility and buying it’s absurdity to enlist their new star athlete and boyfriend respectively when dealing with Tatum’s man-child. Brie Larson provides a sweet love interest for Hill that evolves realistically and Jenko’s science nerd friends are in perfect opposition to everything that he stands for and thus appropriately positioned to turn him to the Dark Side – literally. And with a couple brilliantly-placed cameos -don’t think Holly Robinson Peete’s return as Hoffs is the only easter egg you’ll get – the comedy stays consistent for the duration and has enough of a marriage between utterly stupid and surprisingly well-crafted to hold audience interest.

Considering I am in the minority as far as thinking The Green Hornet was a lot of fun, comparing 21 Jump Street to that reboot may not be as glowing a recommendation as I intend it to be. The parallels are many, however, as Hill and Seth Rogen optioned their childhood TV favorites around the same time while bring the material into more comical territory. Not to mention utilizing a Franco each as little brother Dave delivers with his manic, soon-to-be Berkeley student drug dealer who befriends Schmidt. But while I enjoyed Rogen and co-star Jay Chou’s chemistry in Hornet, Tatum and Hill can’t be beat. Never dull or too over-the-top, their relationship works because its odd couple pairing is believable. Tatum has impeccable delivery and timing and coupled with his scene-stealing role in The Dilemma proves he’s much better than most give him credit for.