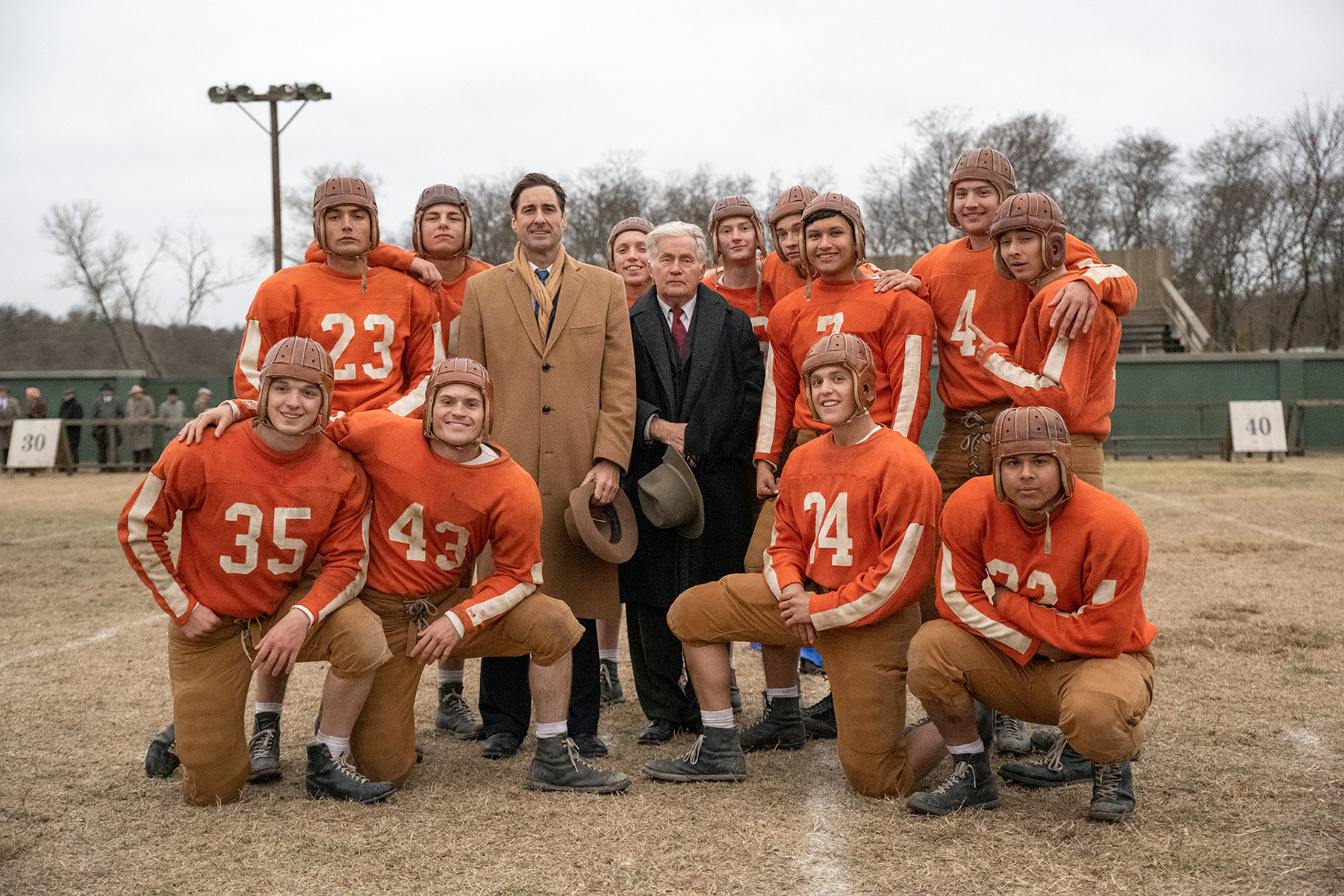 Sports writer Jim Dent had the best of both worlds when deciding to write the book Twelve Mighty Orphans: The Inspiring True Story of the Mighty Mites Who Ruled Texas Football. He had ragtag kids languishing in a Texas orphanage who were able to find the self-respect and courage necessary to overcome stigmas the label “orphan” possessed on and off the field in 1927, as well as a leader in Coach Rusty Russell who would end up revolutionizing football with the advent of the spread offense. That’s feel-good camaraderie and historically relevant biography all wrapped into one to tell an unlikely story that even gets a cameo from President Franklin Delano Roosevelt. No surprise that Hollywood would come calling, too.

Ty Roberts’ 12 Mighty Orphans isn’t, however, a Disney property, despite its narrative fitting their catalog of underdog sports dramas. And that’s not necessarily a bad thing when you’re dealing with subject matter spanning PTSD, Dust Bowl poverty, and the harsh reality of abuse and violence being a root cause for most children ending up at the Fort Worth Masonic Home. There’s no need, therefore, to tone down Coach Russell’s (Luke Wilson) traumatic fits when reminded of his experiences during war, orphanage doctor and assistant coach Doc Hall’s (Martin Sheen) alcoholism, or the brutality wrought by the hands of the school’s deplorable administrator Frank Wynn (Wayne Knight). We need these painful demons to ensure the real onscreen victories aren’t relegated solely to the gridiron.

That doesn’t mean Kevin Meyer, Roberts, and Lane Garrison’s script isn’t without its clichés. There’s still the in-fighting that eventually turns these boys into brothers, the Goliaths on the schedule that no one gives them a chance to defeat, and the notion that education—Russell and his wife Juanita (Vinessa Shaw) took up this post to make a difference by teaching math and English respectively—is the true road towards excellence. That’s kind of the point of these films, though, right? These are against-all-odds morality plays that position hard work and community above self-righteous opportunism (see Knight’s Wynn and Garrison’s rival coach Luther for the latter).

To dismiss this film for being those things only reveals one’s own prejudice to the genre, since their presence is ultimately their purpose. The direction and score may focus them a bit too bluntly at times, the delineation between good and evil maybe a bit too black-and-white throughout, but none of those aspects remove the potency of the lessons learned along the way. If I wish Shaw was given more to do and that the relationship between Russell and Hall (who also narrates) possessed more context than “don’t drink so much because you’re a role model for these boys,” I also get why it was decided to spend that time elsewhere. Their compassion towards these boys is a piece; the boys’ evolution is the puzzle.

And to that end 12 Mighty Orphans is fairly effective. What starts as a group of surly teens quick to dole out punishments of their own in order to pay forward Wynn’s paddle soon turns to brotherhood. Hardy Brown (Jake Austin Walker) is at the center as the newcomer. He was found covered in his father’s blood after the old man was shot and killed, his mother leaving him alone in the fallout. Fairbanks (Levi Dylan) tests his mettle with some fights, scrawny Snoggs (Jacob Lofland) offers friendship, and Coach Russell delivers an outlet—if Hall’s aspirations of forming this team with the help of Mason Hawk’s money (Robert Duvall earning one minute of screen-time) isn’t thwarted by sabotage. If Hardy’s won over, the rest should surely follow.

Thus Wilson becomes the glue holding it all together. He’s the father figure (with Sheen acting as the goofy uncle parroting by his side) who must earn their respect so that he can teach them how to turn the sentiments inwards. As explained by the opening narration, orphans were second-class citizens back then, and the ability to rise above the resulting physical, verbal, and emotional abuse isn’t as easy as flipping a switch. The establishment has to be fought alongside bigger and stronger football teams. The media helps shift the discussion (Rooster McConaughey and Treat Williams champion the role of sports journalism as activism even if the whiteness of all parties involved is telling as to why), and results ultimately speak for themselves.

Heartstring tugs become the motivating factor of many scenes (Russell inventing the spread offense off his young daughter’s drawings shows how image transcends nuts-and-bolts details), but that too is what we expect. That Roberts and company aren’t afraid to go to dark places to do so, however, isn’t. An authentic display of manipulation on behalf of an estranged parent reinforcing what’s been built away from their custody is hardly common. Using it to show these boys are often better off with their makeshift family than their blood relations is the kind of stance Disney wouldn’t necessarily take consciously. They’d probably just cut its complexity out completely. The same goes for Russell calling out the people cheering his team on for refusing to provide allyship beyond that praise.

12 Mighty Orphans takes a stand, and that shouldn’t be diminished by its safe filmmaking or familiar tropes. No wonder, then, that the end credits make certain to provide us a blurb about the life of every athlete depicted alongside their coaches. Because while Russell’s legacy is important, this is just one chapter from his story—a middle chapter at that, regardless of its crucial importance to the whole of his life in hindsight. It’s different for these boys. This is their galvanizing moment. This is the experience that allowed them to become more than the destiny everyone else believed they deserved for the crime of being parentless. We’re talking future NFLers and war heroes who demand to be remembered like anyone else who dared to dream.