Revealer Review: An Apocalyptic Battle for the Soul Unfolds in a Peep Show Booth 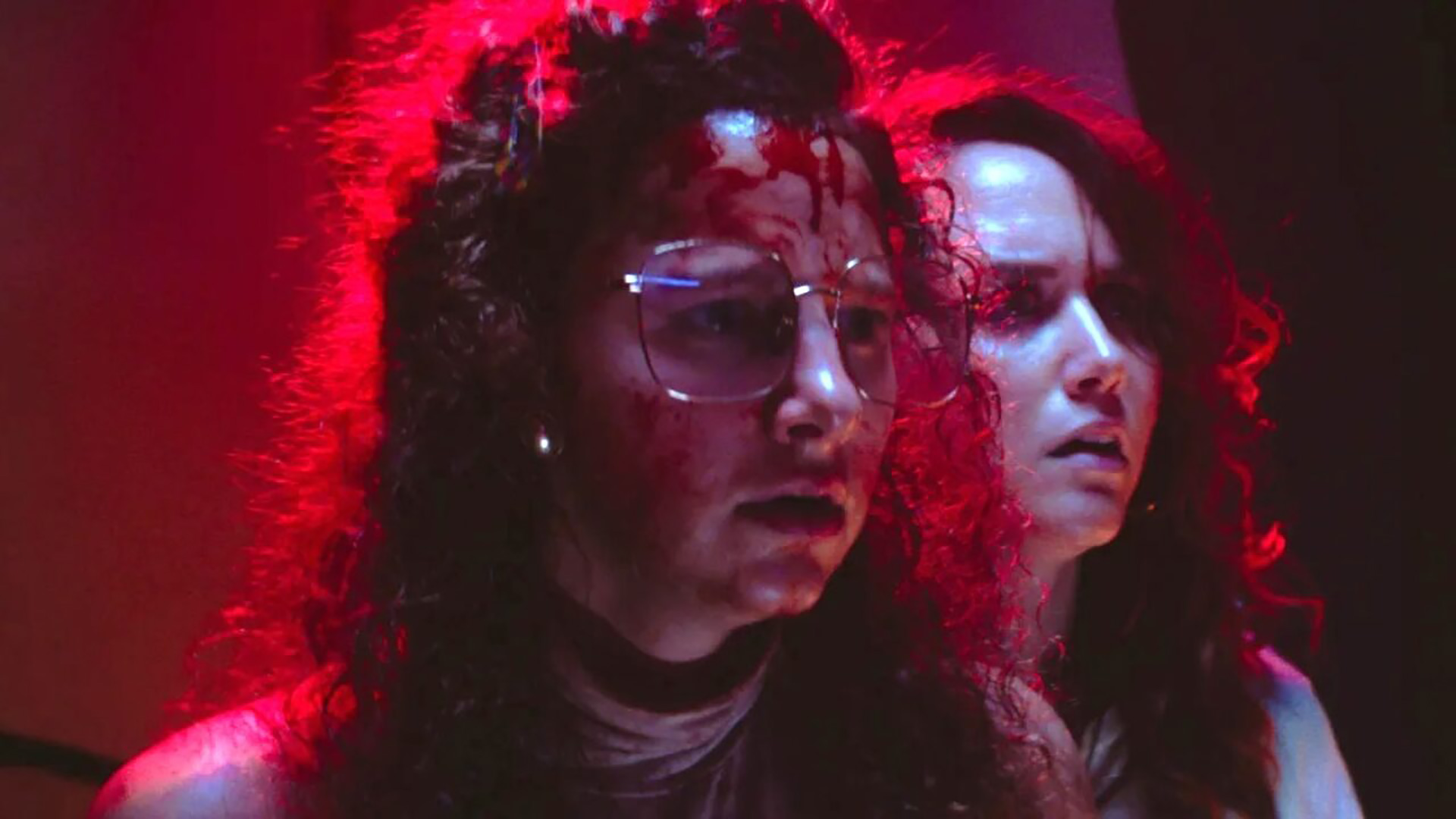 What better setting for a Biblical apocalypse than an XXX novelty shop with peep show booths picketed by religious zealots who, more often than not, protest as a means of projecting their own internalized “sins”? That’s where we meet Angie Pitarelli (Caito Aase) and Sally Mewbourne (Shaina Schrooten) at the start of director Luke Boyce and screenwriters Michael Moreci and Tim Seeley’s Revealer. The former is heading inside to take an extra shift. The latter is screaming at her to repent. These women have a fun (if acrimonious) rapport considering they’ve been at this dance for what we can assume is years as neither gains any ground. Angie isn’t going to quit her job and Sally isn’t going to quit God. Sadly, neither will save them from judgment.

Isn’t that the rub? Whether you lead a carefree lifestyle refusing to kowtow to those who wish to shame you or a pious one dictated by the self-imposed prison of scripture repressing your identity, the end doesn’t change. The Good Place said it best when revealing that no human soul can ever truly ascend because no human is ever truly good—not in a modern world where the smallest, most innocuous action has massively dangerous global reverberations. You can believe yourself a saint and go through the motions, but who’s to say it will ever be enough? One could argue it’s better to just let loose and own your truth. If you’re heading to the same place anyway, at least you’ll have lived an exciting life.

This is the moral quandary at the center of the film—one exacerbated by the Chicago 1987 setting. They’re in the middle of the Satanic Panic craze, every little thing grounds for damnation. Fornication? Disgusting. Blasphemy? How dare you! Homosexuality? Just the word makes Sally shudder. So when the sky turns red with lightning flashes it’s only natural that the screaming would follow closely. Earth is a fertile breeding ground for heretics and hypocrites, junkies and whores. The only reason Angie isn’t infected by the parasitic demon worms crawling about is because she’s locked in her booth, thanks to Ray (Bishop Stevens) never fixing a faulty floorboard. The question is why Sally wasn’t raptured before the first trumpet sounded. What must she still repent?

First thing’s first, though. Escape. With no choice but to work together, Angie and Sally are forced to do the unthinkable: have a real conversation rather than simply spew sardonic barbs at each other. Doing so means dismantling the superficial façades both are comfortable hiding behind despite neither creating them for themselves. It’s Sally’s judgments that presumes Angie is a harlot living a Godless life and doing nothing for the good of humanity; it’s Angie’s assumptions that Sally is a goody-two-shoes by choice, yelling at others out of jealousy rather than shame in herself. They’ve embraced their images, doubling down as a means towards righteousness. Admitting they need the other’s help won’t be easy. Thankfully they have a common enemy to target their surplus rage.

Revealer is obvious low-budget, most of its first half taking place in the peep show booth and the second half in the cavernous, Prohibition-era catacombs winding beneath the streets. It lets its characters paint the picture of what’s happening via their fear rather than a surplus of visual evidence beyond shadows of those being torn apart outside. Sally is quick to relay what each trumpet horn means. Angie has no qualms picking up a crowbar to smash those worms as they come near. The only real “effect” is the appearance of their pursuer: the King of Demons, Asmodeus (Phil Bogdan). He stalks them with intent to pit their opposing lifestyles against the other and let them provide the evidence he needs to steal their souls.

The longer their journey together goes, however, the more vulnerable they allow themselves to become with the truth beneath their cultivated personas. Where Sally spends her days denouncing others instead of lending a charitably helping hand, Angie actually works tirelessly to save someone from falling through the cracks. Where Angie doesn’t shy away from other people’s ideas of hedonistic pleasure despite not necessarily yearning for the same, Sally is hiding her true desires to walk a path she hates simply for the chance at salvation. In another world they might be friends. Considering the carnage wrought by pestilence above, they may have even entered that new world to allow it. But Angie’s truth doesn’t erase her “sins” and Sally’s truth only exposes hers. Asmodeus approaches regardless.

That’s kind of the point. To embrace one’s true self isn’t to find a loophole; it’s to exist outside the constraints of others. These women are facing absolute annihilation yet lean into those things that have put them on the list for eternal damnation because screw whoever decided to label their happiness unforgivable in the first place. What if this whole endeavor is a giant cosmic joke, Angie and Sally thrust together as a means of torture only to eventually conclude that they liked each other? They should be throwing the other to the wolves to save themselves, if not enact revenge, yet they become the other’s protector instead. It’s a heartfelt parable wrapped within a bloody and profane, 80s-aesthetic package.