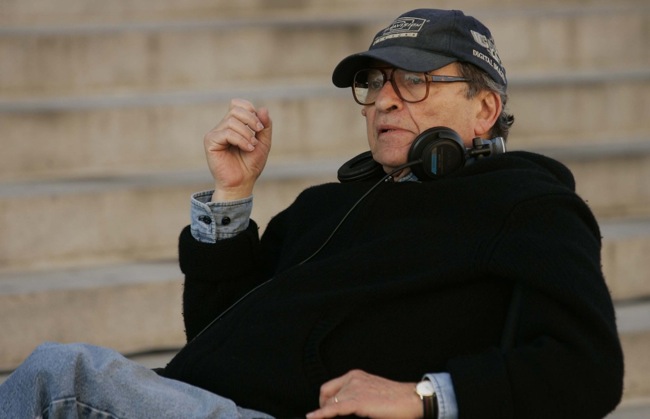 Sidney Lumet died aged 86 on today in his residence in Manhattan, New York, from lymphoma.

Lumet was an Oscar-nominated director, known for films such as for 12 Angry Men, Dog Day Afternoon, Network and The Verdict.

He was born on June 25, 1924, in Philadelphia, to parents Baruch Lumet and Eugenia Wermus, both veteran players of the Yiddish stage. He studied theater acting at the Professional Children’s School of New York and Columbia University. By the time he was 4, Lumet was appearing onstage with his father, and by the age of five he made his stage debut at the Yiddish Art Theatre. He made his Broadway debut in 1935, and appeared in several Broadway shows until World War II broke out in 1939.

After serving three years in the U.S army as a radar repairman stationed, Lumet returned to New York and formed his own theater workshop. He then transitioned from theater to television in 1950, when CBS hired him to direct the television series Danger. In addition to directing the series, Lumet also directed a number of television movies, including Rashomon, The Iceman Cometh, and 12 Angry Men, the last of which he would later turn into his first film.

When looking at Lumet’s career in film, one trend that emerges from the beginning is that he was drawn to projects that dealt with the themes of justice and corruption. He once wrote, “While the goal of all movies is to entertain, the kind of film in which I believe goes one step further. It compels the spectator to examine one facet or another of his own conscience. It stimulates thought and sets the mental juices flowing.”

His first film, 12 Angry Men (1957), centered on the jury process that takes place behind closed doors, focusing on one brave juror (played by Henry Fonda), who believes the accused is innocent, and slowly convinces the other jurors of the same. He allows for a happy ending, while demonstrating the importance of a single voice, emphasizing the sense of personal responsibility. Like fellow acclaimed directors Woody Allen and Martin Scorsese, Lumet defined himself as a New Yorker, using the city as a backdrop for his films. He once stated that felt that in order to create it is important to confront reality on a daily basis. In her introduction to a book of Lumet interviews, Joanna E. Rapf described Lumet saying, “the diversity of the City, its many ethnic neighborhoods, its art and its crime, its sophistication and its corruption, its beauty and its ugliness, all feed into what inspires him.” He was also noted that, “Locations are characters in my movies. The city is capable of portraying the mood a scene requires.”

One such New York story was Serpico (1973), which Lumet would later describe as “a portrait of a real rebel with a cause.” Based on a novel by Peter Mass, circling around true events in which two New York City police officers confessed to a New York Times reporter that they had ample evidence of police corruption. The film, with Al Pacino staring as Detective Serpico, the cop fighting the corruption within the force, became one of Lumet’s most iconic works, and earned an Oscar nomination for Pacino.

Two years later, Lumet would cast Pacino in another New York film, this time focusing on criminals as opposed to police, in Dog Day Afternoon. Also based on true events, the film told the story of a bank robbery gone wrong. The film was nominated for six Academy Awards, and won for Best Screenplay.

Sadly, while many of his films received recognition, Lumet often did not. Despite his films receiving more than 40 Academy Award nominations, Lumet himself never won an Oscar (he was nominated four times). Some speculate that this is due to his preference of New York, and his avoidance of Hollywood, which he saw as a fantasyland and not the real world. It was only in 2005 that the Academy of Motion Picture Arts and Sciences presented him with an honorary Academy Award.

In 2007, at the age of 83, he released Before the Devil Knows You’re Dead, which would become his last feature film. A suspenseful story of two brothers (Philip Seymour Hoffman and Ethan Hawke), this final film captivated many on the elements Lumet was known for, including vigorous storytelling and strong direction, and was met with critical acclaim.

Sidney Lumet was a icon that will surely be missed, both for his vision and approach to the craft. In 1970, Lumet said, “I never did a picture because I was hungry…. Every picture I did was an active, believable, passionate wish. Every picture I did I wanted to do…. I’m having a good time.” With his passing, his films will surely be remembered, but let’s keep that spirit in our memories as well.

What are your favorite Sidney Lumet films?