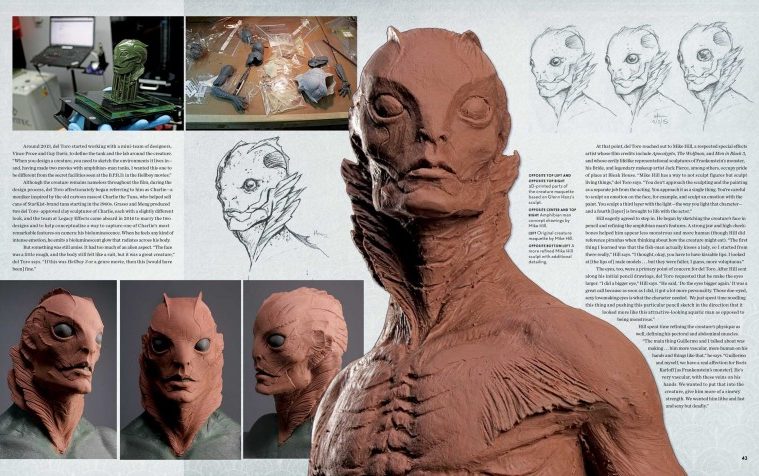 Our latest deep-dive into recent books on cinema is heavy on 2017 follow-ups. But there’s also a unique look at late Godard, a romp through holiday horror, and a visually inventive stroll through 101 memorable movies. Let’s march on, starting with every cinephile’s buddy, Guillermo del Toro.

Guillermo del Toro’s fairy tale romance The Shape of Water was heralded by some as one of 2017’s finest (I’m in that camp) or as 2017’s The Artist (boo). Wherever one stands in this debate, its aesthetic beauty is undeniable. In other words, Shape is more than deserving of the Insight Editions treatment. The book is a gorgeous concoction, filled with del Toro’s endearing sketches, effects tests, film stills, and, best of all, accompanying text that is smart and entertaining; del Toro’s  lengthy character bios are especially fun. (del Toro on Octavia Spencer’s Zelda Fuller: “IS VIEWED AS: Funny but a little loud.”) The book is a reminder, if one was needed, that The Shape of Water is deserving of its praise. And if you’re a Torontonian or Toronto International Film Fest veteran, there is frame-worthy spread of del Toro with stars Sally Hawkins and Doug Jones in the great Elgin Theatre. What more could a Shape fan want?

The most wholly original book in this month’s rundown is surely Godard and Sound, written with deep insight by University of Bristol lecturer Albertine Fox. This analysis of soundscapes in the “late” period of Jean-Luc Godard’s career — from 1979’s Sauve qui peut (la vie) (Every Man for Himself) to 2014’s Adieu au Langage (Goodbye to Language) — is uniquely insightful. The questions Fox asks (“How does one begin to think and write about film sounds when it defies categorization as ‘film music,’ ‘dialogue’ or ‘sound effects’?”) are relevant to all of cinema. But the focus on Godard’s most daring and structurally bold period makes this text particularly important. Understanding his use of sound deepens our understanding of “difficult” works like Film socialisme. “The image of the cruise ship in Film socialisme,” Fox writes, “comes to figure as a forbidding container haunted by a cinema of the past.” That’s beautiful writing, and Godard and Sound is a stunning book.

Yuletide Terror is a deliciously nasty delight for horror junkies. The obvious Christmastime horror flicks are here — the likes of Black Christmas and Silent Night, Deadly Night — but what’s most fascinating are the studies of less-obvious films like Hammer’s Cash on Demand and even 2007 flop P2. There’s even an analysis of 1951’s A Christmas Carol starring Alastair Sim, the finest and most genuinely terrifying big-screen adaptation of Dickens’s tale. And, best of all, Eyes Wide Shut takes its proper place among holiday nightmare tales.

It’s been three months after the release of Rian Johnson’s The Last Jedi, and the conversation around the film has barely diminished. Some has been negative, but for the film’s supporters (right here), its rich storylines and bold choices continue to excite. Anyone who continues to ponder Jedi will adore four noteworthy books inspired by the film. At the top of the list — as usual — is an entry from Lucasfilm’s Pablo Hidalgo. Star Wars: The Last Jedi — The Visual Dictionary (DK) is as successful as DK’s other Star Wars visual dictionaries. Here, up-close and with Hidalgo’s always-impressive background details, are porglets, Ahch-to caretakers, Canto Bight big-shots, and, yes, Snoke’s slippers. The Art of Star Wars: The Last Jedi (Abrams) is the latest behind-the-scenes stunner from Phil Szostak, whose texts on Jedi, The Force Awakens, and Rogue One are must-owns. The book offers the best account yet of Rian Johnson’s approach to creating episode eight. Consider this quote from costume designer Michael  Kaplan: “We’re waving goodbye to the legacy that is the original films and the prequels, even to The Force Awakens … It’s definitely a place that we haven’t been before.” Meanwhile, Star Wars: The Last Jedi — Incredible Cross-sections (DK) by Jason Fry takes us inside ships like Snoke’s Supremacy and the Resistance bomber. Lastly is one of the more unique entries in the recent Star Wars literary canon, Canto Bight (Del Rey). This collection of four novellas — written by Saladin Ahmed, Rae Carson, Mira Grant, and John Jackson Miller — is set during one night on the casino planet memorably visited by Finn and Rose.

Artist Ricardo Cavolo’s work is an explosion of color and creativity, and 101 Movies to Watch Before You Die is a fine example. Framed as his movie diary, 101 Movies is a joy to behold. Cavolo’s studies of films like Buffalo ’66 and Drive are almost as delightful as the films themselves. Also fun is his rundown of “eight people from the movie world I wish were my friends,” highlighted by his question for Hitchcock: “I need to ask Alfred how I can throw all my fears and obsessions into my work, just as he did.” Whether Cavolo realizes it or not, he pulls off the obsession angle in this wonderful collection.

Justice League: The Art of the Film by Abbie Bernstein (Titan Books)

Is it possible that Justice League: The Art of the Film is more interesting than Justice League the film? Indeed, it is. However, this is not because the concept art, costumes, and film stills are so memorable; they are adequate, at best. Rather, it’s because Art of the Film offers a slight glimpse into Zack Snyder’s plans for Justice League. This includes a  slightly different look for Steppenwolf, a.k.a., the worst villain in modern comic book cinema, not to mention stills from a few deleted scenes. For a behind-the-scenes book, Art of the Film has very little text. But there is plenty to ponder here, and, it might be enough to make one want to revisit the film. Maybe … maybe not.

One of the favorite pastimes of my seven-year-old and I is playing with Legos together. OK, he leads, and I follow. That means Lego Star Wars Build Your Own Adventure is a perfect textual companion. It offers handy, easy-to-follow guides to creating mini Slaves 1s and wee tauntaun hitching posts out of whatever Legos one has handy. Now, making a perfect match is tricky. But that’s part of the fun. Build even comes with a Rebel pilot minifigure and Y-wing starfighter. Evan Schobert appreciates that, and so do I.

What are you reading?