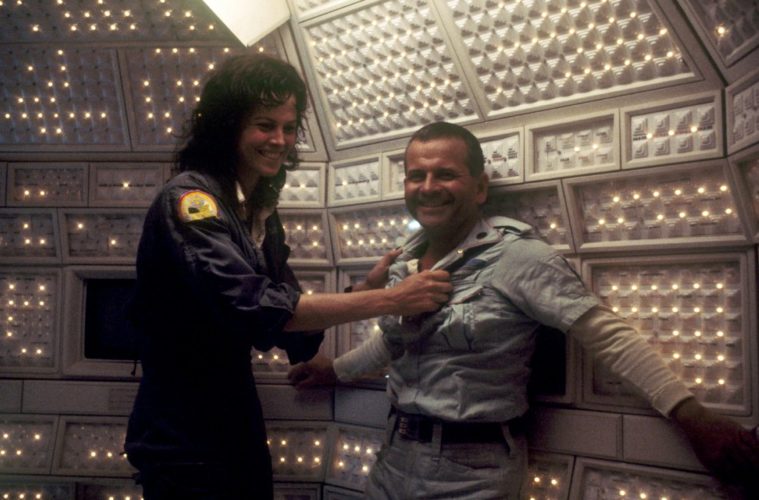 It’s summertime, and that means a roundup of film-related books must include some lighter fare—hence this column’s inclusion of reads about Star Wars, Game of Thrones, Alien, and Dungeons & Dragons. However, there is also a fascinating exploration of Mike Leigh’s underrated Peterloo and a memoir from the late Chantal Akerman. Plus, Howard Stern returns with a deep dive into his years of stunningly insightful celebrity interviews.

The Making of Alien by J.W. Rinzler (Titan Books)

J.W. Rinzler’s books on the original Star Wars trilogy rank among the finest making-ofs in recent decades. And few films are more befitting of the Rinzler treatment than Ridley Scott’s Alien. This beautifully designed text from Titan Books is bursting with illustrations and behind-the-scenes photos, as well as stories of the difficulties Scott faced making the film. There are also absurdly lovely details, like Harry Dean Stanton happily playing guitar while waiting for the filming of the “chestburster” scene. While the stories are a highlight, nothing tops the photography. Perhaps greatest of all is one of the final images in the book, a simple black and white shot of Sigourney Weaver in makeup at Shepperton Studios. She is young, focused, yet also clearly unaware of how her life as about to change. Who would have known what was to come? The answer is no one. But Rinzler does a fine job of showing why, exactly, Alien became one of cinema’s greatest creations.

Star Wars After Lucas: A Critical Guide to the Future of the Galaxy by Dan Golding (University of Minnesota Press)

Anyone fascinated by the post-George Lucas Star Wars universe will find Dan Golding’s Critical Guide to the Future of the Galaxy an essential read. Focusing on The Force Awakens, Rogue One, The Last Jedi, and Star Wars Rebels, Golding crafts an insightful, smart analysis. Perhaps most interesting is his comparison of the use of the faces of Carrie Fisher and Peter Cushing in Rogue One to Sean Young in Blade Runner 2049 and Jeff Bridges in Tron: Legacy: “Leia has, in one timeline, become General Leia, an aged leader, strategist, and mother; in another, she has returned as Princess Leia to the beginning of her serial narrative loop, before she was a mother, unable to age, unable to grow old and unable to escape nostalgia’s deathly grasp.” That’s good writing, and a convincing POV.

Mike Leigh’s bold, ambitious historical drama Peterloo came and went from cinemas rather quietly. But it deserves a close reading, and that arrives thanks to a truly wondrous eBook from the Seventh Row gang. Reading this caused me to revisit the film, and actually change my opinion—and how rare is that? The writing is top-notch; consider this, from Alex Heeney: “Mike Leigh’s Peterloo is a rare story about the fight for a fairer democracy: one of carnage rather than triumph, one that ends with tragedy and unfinished labour rather than success and social change. In other words, despite its broad canvas, including more than a hundred characters acting out historical events, Peterloo is every bit a Mike Leigh film: peppered with flawed, complicated characters, inspirational because it is a story of recognizable people, and nothing like the silk-swishing period pieces that are a staple of British cinema.”

For more than two decades, fans of Howard Stern wondered with the King of All Media would someday follow up his two bestsellers, Private Parts and Miss America. The announcement that he would, with Howard Stern Comes Again, was downright shocking. And perhaps just as surprising was the news that the majority of the book would be transcripts of his years of radio interviews. But this is no simple rehash. The Howard Stern Show interviews included here—featuring the likes of Lady Gaga, Bill Murray, and, of course, Donald Trump—are uniformly enthralling. So too are Stern’s thoughtful, passionate introductions. Stern calls Comes Again “a book about conversation.” It is that, and a lot more.

My Mother Laughs by Chantal Akerman (The Song Cave)

The sudden death of filmmaker Chantal Akerman in 2016 was a tragedy. However, she left behind an unmatched filmography, including her 1975 masterpiece Jeanne Dielman, 23 Quai du Commerce, 1080 Bruxelles. She also left a moving memoir, My Mother Laughs, authored just before her passing. It is an often painful read—“I had had enough of all of these survivor stories,” she writes. “For years, I was consumed by them. Now I had had enough.” It’s a somber experience, but also a reminder that Akerman’s voice was utterly unique.

Game of Thrones: The Storyboards by William Simpson (Insight Editions)

Yes, Game of Thrones is over. Yes, the final season was pretty much a disaster. But we have the memories. And, there’s also The Storyboards, a stunning coffee table book that rather remarkably goes season by season and episode by episode. Full of intricate detail and a few surprises, this is, quite frankly, a book die-hard fans will treasure. It’s also a reminder that even before the series became the pop phenomenon we know today, it was an imaginative, emotionally powerful tale of heroism, romance, and darkness.

However one feels about Seth MacFarlane’s Family Guy, the illustrated history from Dey St. is a visual (and comic) delight. Is it necessary that we know the inspiration for, say, the Drunken Clam? Probably not. But that does not mean it’s not fascinating all the same. This exploration of the show’s birth, death, and resurrection is well-explained, and the making-of illustrations are pretty damn funny. And, since we’re talking about Family Guy, also a tad discomfiting. Griffin-ites would not want it any other way.

The new graphic novel Cheshire Crossing is centered around a killer trio—Alice from Alice in Wonderland, Wendy from Peter Pan, and Dorothy from The Wizard of Oz—and adds a boarding school for teens with supernatural powers to the mix. Written by The Martian’s Andy Weir and gorgeously illustrated by Sarah Anderson, Cheshire is a thrilling, imaginative journey. I demand a film adaptation.

Off Beat Cinema Presents Movies 365: A Good Movie for Every Day of the Year by Greg Sterlace (Adequate Life Publishing in conjunction with Lulu.com)

Shot in my hometown of Buffalo, NY, and broadcast nationwide, two-hour weekly movie showcase Off Beat Cinema is a long-running favorite of film fans. It is only fitting, therefore, that Off Beat Cinema Presents Movies 365: A Good Movie for Every Day of the Year is so, so fun. Authored by Greg Sterlace and featuring input from folks like Off Beat’s Constance Caldwell, 365 is a book that can be opened and enjoyed at any point. Featuring everything from The Young Lions to Mistress America, it’s a hard-to-put-down pleasure of a read.

The recent release of season three of Stranger Things has rekindled interest in malls, new Coke, and, of course, Dungeons & Dragons. So the time is right for the release of two new Young Adventurer’s Guides for young readers. They provide a useful starting point, with background on characters and creatures. The books are well-designed and easy to read; my son is now officially hooked.

DK’s Lego books seem to grow more detailed and more enjoyable with each new edition. And the favorite in my house is the frequently updated Lego Star Wars guides. The latest brings us right to Lego’s Solo sets. My 9-year-old was especially enamored with the book’s accompanying exclusive minifigure: Finn in his “naked, leaking” recovery outfit from The Last Jedi. While it’s a bit of a tease—many of these sets are long gone from retailers—it’s still a blast to see all that’s come before.

Two David Lynch films arrived on Blu-ray in recent weeks, and both releases were newsworthy. Criterion’s release of 1986’s Blue Velvet features 53 minutes of deleted scenes assembled by Lynch, a true treasure trove for devotees of his work. In addition there are multiple documentaries and, of course, the classic film itself. Frank Booth has never looked and sounded so ferocious. Kino Lorber’s release of 1997’s Lost Highway comes, to put it mildly, with some controversy. Lynch criticized the release for not using the original negative, while Kino Lorber said it was Lynch who passed on overseeing the restoration. It is hard to say who is correct, but it is undeniable that having this fugue state thriller on Blu-ray is momentous. And one more noteworthy and ultra-intense release is Criterion’s special edition of Michael Haneke’s original Funny Games. It remains one of his most upsetting provocations. As the great critic Bilge Ebiri writes in the booklet, “Funny Games may be simple and sadistic in conception, but it is complex and humanistic in its particulars. That’s why it works so well.” One can also listen to our discussion of it on The Film Stage Show here.