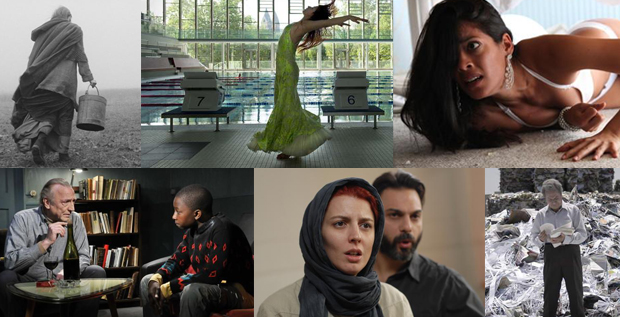 Earlier in the month we celebrated with Happy Happy director Anne Sewitsky when her dulcet dogme dramedy was selected as Norway’s submission for the 84th Annual Academy Awards’ foreign-language category. Since then a bevy of other countries have chosen their entries, many of which will be screened at part of the New York Film Festival in a few weeks including: Wim Wenders’s Pina, Aki Kaurismaki’s Le Havre, Béla Tarr’s The Turin Horse, Joseph Cedar’s Footnote, Asghar Farhadi’s A Separation and Gerardo Naranjo’s Miss Bala. {Look for reviews in the coming weeks here.}

Among other notable entries is China’s submission The Flowers of War, a historical drama that reveals the invasion of the Japanese Imperial Army in 1937 Nanking. The film’s director Zhang Yimou has twice earned Oscar nods in this category (for Raise the Red Lantern and Ju Dou) and notably directed the jaw-dropping opening ceremonies of the Beijing Olympics in 2008. Yimou is renowned for his sweeping and emotionally gripping epics, and as this one boasts a $90 million budget and recent Oscar winner Christian Bale (the film features dialogue in English and Mandarin), it’s little wonder that China would choose The Flowers of War. [THR]

Alternately, Mexico’s taking a different path to Oscar gold, selecting the gritty action drama Miss Bala, which will played at TIFF and will soon make its U.S. debut at NYFF before a limited release run beginning on October 14. The film centers on a wannabe beauty queen surrounded by a world of cruel men and organized crime and is directed by Gerardo Naranjo, who has only just begun to build an international reputation. Miss Bala is a dark horse candidate on many fronts, especially considering only 8 Mexican features have made it through the running to score an Oscar nomination since 1957. None tooks home the award. [THR]

When searching for trends in this year’s crop of potential Oscar nominees, Peter Knegt of Indiewire noted that a substantial portion of the selected films have been helmed by females directors, “including France (Valérie Donzelli’s “Declaration of War”), Hong Kong (Ann Hui’s “A Simple Life”), Norway (Anne Sewitsky’s “Happy Happy”), Poland (Agnieszka Holland’s “In Darkness”), The Netherlands (Maria Peters’s “Sonny Boy”) and [Nadine Labaki’s “Where Do We Go Now?”] and many others.” Knegt goes on to note it was acclaimed Danish director Susanne Bier whose drama A Better World won the Best Foreign-Language Oscar last year. This may be salve to some who are already lamenting the lack of viable female candidates for Best Director in this year’s Oscar race.

With the submission deadline (October 1, 2011) drawing near, a complete list of submitted hopefuls will soon be available. In the meantime here is a thorough list compiled by Indiewire.

Albania – The Forgiveness of Blood, directed by Joshua Marston

Colombia – The Colors of the Mountain, directed by Carlos César Arbeláez

Ireland –  As If I Am Not There, directed by Juanita Wilson

Lebanon – Where Do We Go Now?, directed by Nadine Labaki

Lithuania – Back to Your Arms, directed by Kristijonas Vildžiūnas

Phillippines – The Woman in the Septic Tank, directed by Marlon Rivera

Russia – Burnt By The Sun 2: Citadel, directed by Nikita Mikhalkov

Sweden – Beyond, directed by Pernilla August

Venezuela – The Rumble of the Stones, directed by Alejandro Bellame Palacios