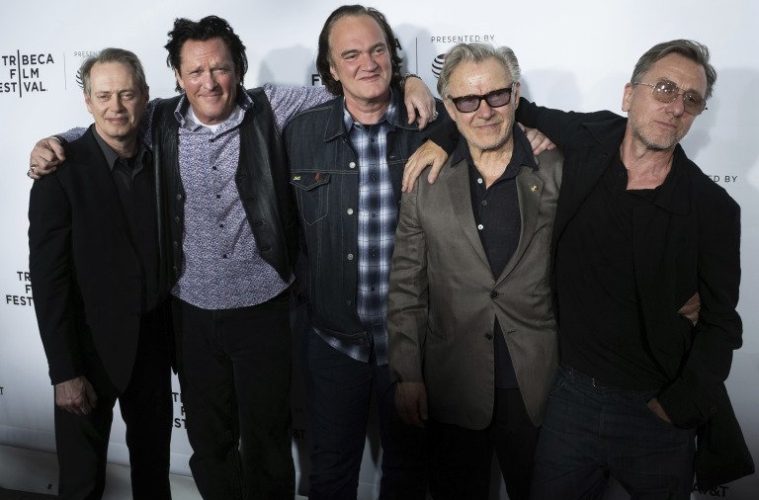 Spend a quarter-century talking about a 90-minute movie and you’ll start running out of new things to say. This was evident at last night’s 25th-anniversary screening of Reservoir Dogs, which the Tribeca Film Festival managed to make far more than the standard classic-that-people-will-pay-to-see-gets-brief-theatrical-engagement deal. More, even, than the extended post-screening discussion with Quentin Tarantino, Tim Roth, Michael Madsen, Steve Buscemi, and Harvey Keitel — more unique, and more of a selling point for completists such as yours truly — were its setting (NYC’s gorgeous Beacon Theater, which offered one of the biggest screens on which you could ever hope to see a scrappy crime movie) and specifications (Tarantino’s own, more-or-less-flawless 35mm print).

Though there’s this writer’s particular perspective: grow up obsessed with cinematic production methods in the era of IMDb “Did You Know?” sections, well-detailed Wikipedia articles, and ten-year-anniversary-DVD special features, and you’ll suddenly be able to communicate information, and information you might not have realized was there in the first place, at a moment’s notice. (And let’s not even get into the psychotic experience of revisiting a foundational movie years and years and years since last seeing it, then finding you can recall the tenor of specific line readings as if they were favorite songs. “I’m tryna watch The Lost Boys, mang.” “AssHOLE!”) Which isn’t to say it wasn’t immensely fun to have Tarantino, roughly 200 feet from you, retell the story of how its first Sundance screening was a disaster, or again hear about the life-imitates-unmade-art situation wherein actors couldn’t completely agree about who should play what. (Despite his increasingly gruff voice, Michael Madsen, who auditioned for Mr. Pink after nabbing Mr. Blonde, manages a pretty spot-on Tarantino impression: “Youuuuu’re not Mr. Pink. You’re Mr. Blonde.”) It was instead the spaces between those well-known tidbits that surprised.

Harvey Keitel’s generosity in getting the film — and, in effect, Tarantino — made are well-known, not least of all the fact that he paid for the upstart and his producer, Lawrence Bender, to fly to New York to audition actors, from which Steve Buscemi (who barely said a word) was found. (Keitel: “To this day, I enjoy reminding Steve Buscemi that he owes me his career.”) But only by attending — or, ahem, reading one of these event recaps — would I learn that Tarantino is supposedly incapable of pronouncing the beloved actor and longtime friend’s name. It’s “Kye-tel,” of course, but even when reminded that he first called him “Mr. Key-tul” and asked point-blank how he now pronounces it, the filmmaker still stumbled a bit. (You can lead a horse to water…) But Keitel supposedly likes this all the same. Or, for that matter, that he flew first-class as Tarantino and Bender flew coach, and that, meeting in the middle of the plane to talk, the actor said something which I’d readily believe planted the seeds for Winston Wolfe: ”I guess, in a perfect world, there’d be no such thing as first-class. But since there is, I’m going to fly it.” I could’ve guessed the then-28 Tarantino was on cloud nine, but there emerged from this retrospective a rare display of sentimentality from a typically cuastic figure. Between rehearsing and shooting, “the pressure was off” once he realized, at a dinner Keitel hosted in a rented house, that the actors’ chemistry locked much of the movie into place, and only his focus was needed to tie the bow. Driving from Malibu back to his mom’s house in Glendale (where he was living at the time) via Sunset Blvd., realizing that he might finally have a career in place, the man experienced, in his words, “The happiest moment of my life.”

Reservoir Dogs continues to follow its talent. When Tarantino revealed that, for years, people across the world would supplement any reference to Mr. Blonde’s dance with a little shimmy to communicate just what they meant (as if this is some kind of mystery), Madsen explained how it’s never gotten away from him — to the point that it was requested he do his dance at the opening ceremony of a Michigan venue called “The Michael Madsen Theater.” And so a personal-crisis-of-sorts emerged: “I started imagining myself at 80 years old, someone asking me to do the Mr. Blonde dance. It’s been following me around forever.” Not that he was even sure what to do the day of: they never rehearsed it, and Madsen, along with being “so intimidated by it,” was baffled by the script’s claim that Mr. Blonde “maniacally dances around.” “And I kept thinking, ‘What the fuck does that mean? Mick Jagger? Maniacal? What the fuck is he going to do?’” Blonde may be a Lee Marvin fan, but Madsen, “at the last second,” thought of a Jimmy Cagney dance to get it right.

As for the movie? It’s even stronger and stranger than I’d recalled, perhaps in part because it looks more and more like a lesson for budding filmmakers: it really does help to be lean, be (genuinely) mean, build your slim premise with bits and digressions that match the piece’s spirit but don’t necessarily burden all else with a significance or subtext, and take assistance from people who know a lot about things outside your range (e.g. DP Andrzej Sekuła and late editor Sally Menke, who got a round of applause during the opening credits). There was no word on what Tarantino will do next, but experiencing this theatrically — Reservoir Dogs is the last film of his I’d not seen in a truly proper environment — had us ready for whatever’s next.