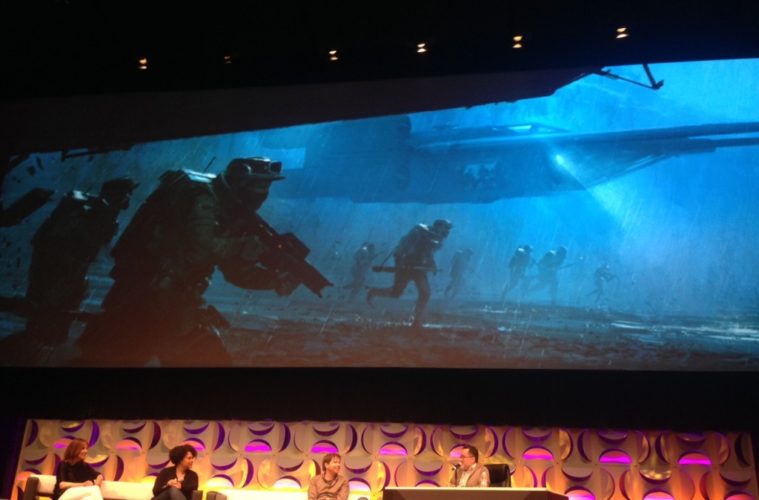 J.J. Abrams‘ Star Wars: The Force Awakens wasn’t the only thing teased at this weekend’s event. As we know, Godzilla and Monsters director Gareth Edwards will soon be kicking off production on the first Star Wars spin-off film, Rogue One, ahead of a December 16th, 2016 release. Led by Felicity Jones, there’s been a few rumors concerning the plot and casting (with Ben Mendelsohn circling), and now today some of that has been confirmed.

First up, we can throw away the spin-off moniker as these in-between adventures are now being referred to as “Anthology” films. Using it as an “opportunity for us to tap into emergent directing talent out there and do some things that are unexpected,” the first story details were revealed for Edwards’ film.

As rumors were confirmed, it reads: “A band of resistance fighters unite for a daring mission to steal the Death Star plans in the Star Wars Anthology film, Rogue One.” Clarifying a few more details, the story takes place before A New Hope and after Episode III and won’t feature Jedi powers. Rather, “It comes down to a group of individuals who don’t have magical powers that have to somehow bring hope to the galaxy.”

Confirming that Jones will play a Rebel soldier, Edwards adds they are going for a grounded tone, saying, “This is a real place that we’re really in…The thing that interests me about it, is Star Wars was basically very black and white. Our movie is gray.”

Along with the concept art above, Edwards and company also showed off the first teaser (although shooting hasn’t begun) for the heist movie. Check it out below and if the embed goes down, we imagine you can find a mirror on Twitter.

Here it is!: ROGUE ONE TEASER!

Featuring cinematography by Greig Fraser and a score by Alexandre Desplat, production will begin in the UK and around the world shortly for Star Wars Anthology: Rogue One.

What do you think of the new details?