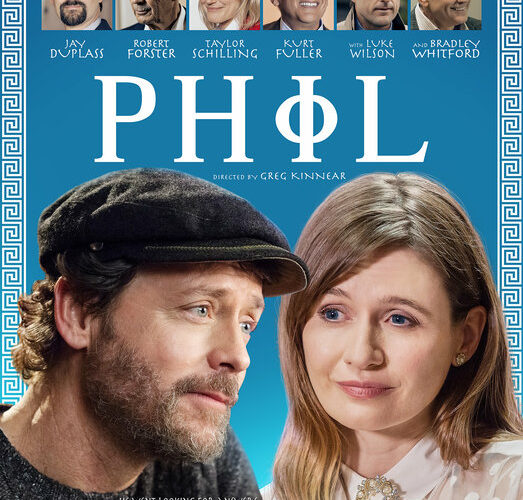 We meet Phil McGuire (Greg Kinnear) exiting his parked car while still in traffic to climb up a bridge railing. It’s a one hundred-plus foot drop into the water and he imagines taking the plunge before a group of teens with cellphones outstretched jolt him from the morbid sensation with excitable demands that he jump so they can enjoy the carnage. That’s a bold tonal mood on behalf of screenwriter Stephen Mazur and director Kinnear (his debut) because there’s actual dejection on their faces upon realizing Phil won’t comply with their Faces of Death desire to go viral. Here’s a man in obvious psychological pain and we’re asked to shrug the situation off for the first of many cheap laughs in a film that otherwise attempts heartfelt empathy. I do believe Phil means well, but its script constantly undercuts that desire so its situational humor may land at the expense of a healthy dose of grief. What’s the point of the former if the latter proves you’d rather your audience laugh than cry? You’re allowed to embrace the comedy in this way and accept your dark sensibilities and provocations are the goal, but don’t think you can dial it back later to reclaim our hearts. If that ship doesn’t sail the moment you realize the lead (Phil) has infiltrated a widow’s (Emily Mortimer’s Alicia Fisk) life under false pretenses the day after her husband’s (Bradley Whitford’s Michael) post-suicide burial, his inevitable admission ham-fistedly reminding us that he is more important than her surely will.

Phil entering Alicia’s life to discover why her seemingly happy and well-adjusted Michael killed himself isn’t the issue. The film’s blatant use of her as a pawn towards those means is. Instead of being someone he sympathizes or feels for, she proves a sounding board—a witness—to coax out details of her husband’s life when not snooping around her home to do the same. Whether or not Phil is hurting shouldn’t factor into the heinousness of his actions and anything he does in the process to help her cope doesn’t negate his objectively selfish intent. We’re therefore asked to get behind the mystery of Michael’s death, enjoy Phil’s pratfalls in pretending to be the deceased’s long-lost Greek acquaintance, and accept Alicia as a means to an end. Here’s the chain of events. Phil stops short of suicide only to meet Michael the next morning in his dental office. So enamored by this guy who literally lights up a room, Phil starts following him to maybe uncover the secret of happiness his own life as a divorced dad (to Megan Charpentier’s Molly) couldn’t achieve. Along the way he discovers Michael’s body, panics, and runs from the scene with more self-loathing and nihilism than before. Because if this guy couldn’t live within a perfect existence, how could Phil endure an imperfect one? And when Alicia finds him passed out drunk atop her husband’s grave, he has no choice but to admit his creepiness or pretend to be a friend Michael told him about whom she never met.

Does what follows open Phil’s eyes to what he already has? Not really. Does it help ease Alicia’s suffering? Not enough to offset the gut-punch we know is coming once a detective (Luke Wilson) is assigned the case. Rather than provide growth, Mazur has written a scenario for close calls, ethnic stereotyping, and awkward shades of potential romance. The first is obvious considering how many people will eventually meet Phil’s alter ego Spiros (Robert Forster as Michael’s father, Kurt Fuller as his boss, and Taylor Schilling as his university colleague). The second is easy because Phil must adapt to everything Alicia remembers hearing about Spiros (smoking Turkish cigarettes for one). And the third is a casualty of not providing another purpose for him being around her so much. Phil’s brother Malcolm (Jay Duplass) gets involved as a point of reflection to pull him out of the ruse, but Mazur uses him more as a reminder of “Phil” than an avenue to save him. Spiros is for better or worse alone during the entire middle third—a stranger who volunteers to build Alicia a bathroom while seeking answers that he’s too broken to realize won’t help. With a clue board tacked to his apartment wall giving him leads that are often debunked minutes later, Phil is spiraling despite a throwaway line by his ex-wife (Nicole Oliver’s Rosemary) saying he looks different in a way that’s trying to make us hear, “You look better.” He doesn’t, though. He simply looks different because he’s disassociating from himself.

We should sympathize with him because of this. We should care about whether he will pull out of it because he’s the protagonist and we know he’s suicidal. This is an impossible task, though, since we’re supposed to be laughing at him instead. We can’t even mourn Michael or Alicia either as Phil’s entire quest is to find dirt that will devalue the façade the Fisks have been hiding behind. The film is thus extremely mean in its willingness to purposefully ignore Phil’s demons and crave the dismantlement of Alicia’s life. It’s so off-putting that the script’s ability to subvert expectations at the eleventh hour falls flat. Suddenly we’re the pawns being manipulated to anticipate the worst before Mazur and Kinnear swoop in and show hope can prevail.