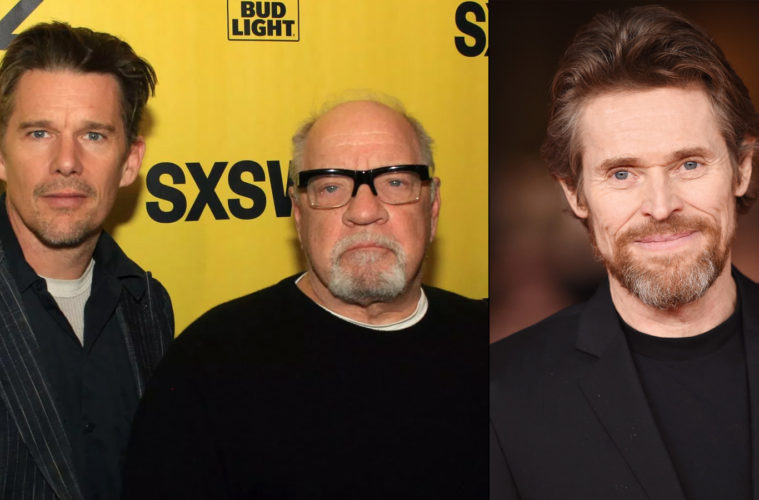 Update: Ethan Hawke has dropped out of the film due to a commitment with his John Brown series, and Schrader is looking to recast, he revealed in a new Variety podcast. See the original story below.

Needless to say, the follow-up to our #1 film of the year blips on the radar a little more strongly. Word has recently emerged, thanks in no small part to Erick Weber hearing it from the man himself, that Paul Schrader will follow First Reformed with Nine Men from Now, a western starring Willem Dafoe and Ethan Hawke. Buried in a Deadline interview is an expansion on that, the writer-director having said the following:

“One character is like Randolph Scott, the righteous lawman, and the other character is the slinky antagonist, the weasel. And so I was thinking, Ethan and Willem have both played both. They’ve both been an upright, they’ve both been weasels. So, which one should play which? Then I realized I could have it both ways, start Ethan out as the righteous one, Willem as the reprobate, and then at the beginning of the third act, flip ’em. So, all of a sudden, nobody in the story actually knows it, but all of a sudden they are playing the opposite roles.”

Quick Googling revealed Schrader’s had this one in mind for some time: the University of Texas at Austin’s Harry Ransom Center holds a circa-1998 first draft of Nine Men from Now, itself listed as a reworking of the Budd Boetticher-directed, Burt Kennedy-scripted, Randolph Scott-starring Seven Men from Now. (I’ll assume that Schrader mentioning Randolph Scott right at the start of our interview this year sparked new life for the project.) Briefly:

Former sheriff Ben Stride, haunted by the loss of his wife in a Wells fargo robbery, hunts for the seven men responsible for her death — along the way encountering a couple heading west for California, and an outlaw he once arrested.

This, frankly, could be about anything with a Schrader-Hawke-Dafoe combination and we’d be all aboard, and while there’s no saying how things have changed in the 20-plus years since a first draft came to be, any mixture of a haunted past and violent present sounds firmly in his wheelhouse.

For (perhaps) a glimpse of what’s to come, find a trailer for Boetticher’s film below: