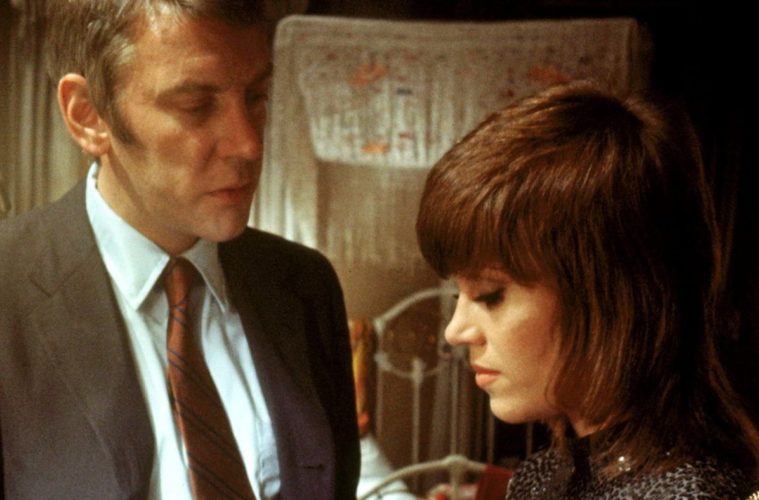 Paranoia reigns supreme in three recent Blu-Rays from the Criterion Collection. Leading the charge is Alan Pakula’s 1971 neo-noir Klute, widely regarded as the first and most overlooked of the director’s 1970s “paranoid trilogy” which also includes The Parallax View and All the President’s Men. A phenomenally tense, haunting and deliberate detective thriller, Klute leverages two intense lead performances from Donald Sutherland and Jane Fonda cast as perfect foils: a stoic, repressed private dick visiting New York City in search of a missing friend, and an outspoken, libertine call girl and aspiring actress who may be connected to the case. Fonda’s performance was met with emphatic critical acclaim at the time, culminating in an Academy Award, and for good reason: her antiheroine Bree is one of the most multilayered and intriguing femme fatales in all of cinema, a child of the sexual revolution who is simultaneously empowered and enslaved by her pursuit of economic and sexual “freedom.” Sutherland’s detective Klute, by contrast, is a morose, chiseled monument to anti-charisma, a rejoinder to Humphrey Bogart-esque stoic machismo, whose perpetual silence is both reassuring and unnerving as Bree endeavors to deconstruct his icy persona.

Pakula and writers Andy and Dave Lewis use the tensions between the two characters, their contrasting social positions, and web of hidden sins they unravel together as vehicles for a complex and deeply cynical reflection on the age of sexual “liberation,” in which peeling back the layers of repressive social custom reveals a seedy underworld of drugs, crime, and alienation, and the promise of women’s liberation is perpetually thwarted by systems of economic and patriarchal violence embedded far deeper than we can fathom. Its visualization of The Deuce-era New York is a breathtaking claustrophobic fever dream, using long skulking tracking shots and eerie wide-shot compositions of asymmetrical geometry and light to poke up hidden corners of urban squalor seeping with imbalance and unease, as uncertain POV shots and a preponderance of surveillance equipment (prefiguring Coppola’s The Conversation) indicate that in the big city, you are never alone.

Next up in the Criterion paranoia-thon is Michael Radford’s adaptation of 1984, cheekily filmed and released within the very timeframe predicted in George Orwell’s 1949 novel. John Hurt stars as Orwell’s nebbish “thought criminal” Winston Smith, as Radford and an up-and-coming Roger Deakins attempt to visualize on their own terms the story without which other iconic cinema dystopias (see: THX-1138, Brazil) would be unthinkable. Orwell’s philosophy-heavy novel is primarily concerned with language – its sociological dimensions and its capacity for co-option by authoritarian politics – so it’s maybe inevitable that any faithful feature-film adaptation is doomed to come off as a bit sparse, muddled and incomplete, as this one does, in spite (or because?) of its ample poetic silences. But Radford does offer a sumptuous, rattling and unforgettable visualization of Orwell’s trailblazing imagery, thanks in no small part to Deakins’s contributions. Eschewing both the abstract futurism of THX and the expressionist pandemonium of Brazil, these two sets of eyes behind the camera craft a more grounded and immediately believable dystopia, filming in and around uniquely dilapidated bits of London in perfectly dusty, cracked and oblong sets, populated by gaunt English faces and cast in inky deep shadows on a pre-digital desaturated color palette. Of course, nearly every scene and set is complemented by the omnipresent propaganda telecasts, broadcast in grainy sepia tone on giant, clear oval screens–fittingly, the only part of London in this crumbling Soviet-gothic nightmare which seems to be appropriately maintained. One of Deakins’s many breathtaking shots sees Winston hunched in the corner of his dingy apartment, scribbling thoughts in his forbidden private journal as the glowing, giant televised face of the Stalin-esque Big Brother glares down at him from the center of the frame. None of it feels like a retro-futurist abstraction – the world on the screen truly looks like London gone the way of Pyongyang, glimpsed in dreams of a terrible alternate history.

Finally, there is Agnieszka Holland’s 1990 Europa Europa, a historical drama which seems too outlandish to believe, yet is based on a mind-boggling true story relayed in the autobiography of Holocaust survivor Salomon Perel. Playing like a perverse mix of Barry Lyndon and The Pianist, the film–part survivalist thriller, part gloomy family drama, part pitch-black satire–follows the German-born Perel’s transnational youth as he assumes an escalating succession of lies and falsified identities to escape persecution at the hands of two dueling dictators in Eastern Europe. Uprooted by the ascendant Nazi movement, his family flees to Poland, only to find themselves caught between the invading Nazis and Soviets. Alone and separated from his family, Salomon settles into a Bolshevik refugee camp to be educated in the ways of Soviet Communism, only to end up back in the hands of the Nazis, where his lifesaving gambit of passing as an ethnic German sees him sent off to a Hitler Youth Academy to be re-re-educated as a Nazi. As miraculous luck and quick wits repeatedly save his life, on each side Salomon must lie about or alter his identity: to the Soviets, he disavows the religious devotion of his family and downplays their “bourgeois” ownership of a small business ransacked by the Nazis; to the Nazis, he must falsify his entire heritage, claiming to be a German victim of Bolsheviks and keeping his composure amongst rituals of rabid antisemitism. Europa Europa, a largely prosaic drama, lacks the eye and budget of those classics to which it begs comparison, yet it still serves as a perceptive, damning portrayal of the contradictory and cruel ways in which Jewish identity was manufactured and policed during wartime Europe, leading–as in Salomon’s eventual case–to the resurgence of Zionism as the Jewish repudiation of civilizations which reject them on not just materially but existentially.

So much of Salomon’s identitarian angst is centered around his circumcision, and branching from this the film has strange and unnerving sexual undercurrents woven throughout. Adults of both genders repeatedly take one-sided sexual interests in the adolescent boy, whose nude body is displayed before the camera more than once–and the consequences of these attractions, and the non-consensual contact they inspire, seem to risk Salomon’s life before unexpectedly saving it (an adult Nazi soldier and closeted homosexual who makes unwelcome advances on Salomon in private discovers his secret–then, out of affection, agrees to keep it). Meanwhile Salomon’s girlfriend at the Hitler Youth Academy, Leni, is virulently fixated on Nazi eugenics. In one particularly grueling plotline, a paranoid and horny Salomon attempts to uncircumcise himself using home implements, to excruciating results. The sign of Salomon’s dreaded difference is invisible to the casual observer, yet inescapably marked on his body: the anxious paradox of Jewish identity in a nutshell.

Klute, 1984, and Europa Europa are now on The Criterion Collection.