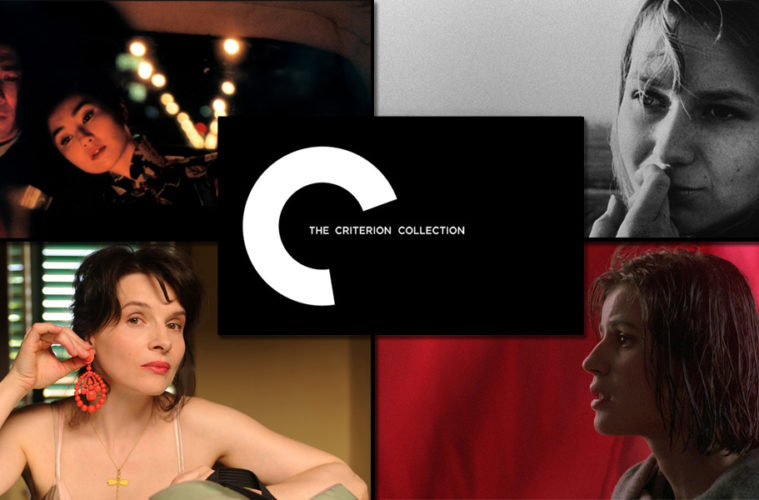 Criterion have once again launched a bi-annual sale at their finest brick-and-mortar outlet, Barnes & Noble, and we thus thought it’d be a good idea to bring you ten favorite titles in their vast, ever-growing collection. I don’t know how ten (excepting the additions that come with box sets) could be possible, even after listing and making my case for a limited set. As someone who can already hear the chorus of “what about… ?!” cries, let my quick run through entire national canons be summarized in the plainest of terms: this was terribly difficult.

And I can’t exactly pin down a logic to this listing. What you’ll find below shouldn’t strictly be seen as an assembly of the very finest films, the best overall releases, the most-underlooked pictures from established auteurs, etc., but titles that, in various ways, display what great things Criterion are capable of. (Let it be noted that these are “main” titles, meaning that some of my favorite Eclipse sets, as invaluable as they are, have been relegated below.) And, again, excising some things in favor of others was harder than you could imagine. The lack of any Welles, Ōshima, Antonioni, Dreyer, Malick, Godard, Truffaut, Rohmer, Tarkovsky, Yang (the sole picture of his currently in their ranks, at least), Costa, Lang, Powell & Pressburger, the BBS set… that list goes on, this one had a limit, and I’m actually a bit flustered when considering selectivity as a rule here. All the more credit to them for helping turn a rundown into a bit of soul-searching.

Check out my top ten favorites below, followed by recent releases, more essentials, and films from notable directors. One can also click any title to head over to the B&N page for their sale, which runs until December 1st.

Forgive a brief entry on something so monumental, for I feel my thoughts on Brakhage do sometimes only come down to “man, this is really neat.” The set almost speaks for itself, anyway. Nearly 800 minutes of experimental cinema, spanning from 1954 to 2001 and running anywhere from 8 seconds to 74 minutes — that it’s only $40 says enough, but the demand for a high-quality presentation of his material (as much as anything else listed herein) makes this a must.

It’s strange to think any figure as towering as Charlie Chaplin might have made a film that’s since become overlooked. I’m not suggesting this is the case with Monsieur Verdoux, his second sound feature — or third, depending on how you want to label Modern Times — but the ratio of this film’s I-think-evident greatness to how often it’s discussed within the Chaplin canon is terribly off. (Stranger still that it has great creative input from Orson Welles, also hardly a marginalized figure in the annals of film history.) The selection of features is limited, but hardly paltry, especially when we have a film that could speak volumes with so little as a menu to accompany it. It’s a real stunner: as funny in both is scripting and visual language as anything he put his name to, but far and away the most haunted of them as well. One of the many great things about Chaplin is that you’re never quite done discovering his genius. Now I’m just waiting until Criterion finally give Limelight its due.

In the Mood for Love (Wong Kar-wai)

It’s somewhat amusing that this, likely the best 21st-century picture under their banner, boasts a vibrant-beyond-vibrant transfer — one with so much textural depth that I could swear my screen would start undulating whenever the camera moved — that brings us closer than ever to its period setting. (Better yet one that it’s also one to, somewhat contradictorily, highlight the expressions and gestures driving a love story I’d also consider so timeless.) Notwithstanding whatever dumb situation led the the excision of some features from its Blu-ray release, this is a strong harmony of picture, presentation, and examination. If you can’t do much better than In the Mood for Love, why go for anything but the best way to experience it?

I’m more predisposed toward Close-Up, admittedly, but Certified Copy gets this particular advantage for two reasons: its HD transfer more clearly possesses the sort of clarity and cleanness one expects of the company — one stronger than that which is found in Kiarostami’s 1990 film, though that’s still a great cinematographic achievement — and the disc itself includes his excellent 1977 feature, The Report. Commendable in its own right and a suitable companion piece to his bewitching new classic, it’s a film any of the writer-director’s fans owe themselves to see. That Criterion made it so readily available (and at essentially no additional charge) further argue for why the company have earned their reputation.

Two of the greatest films of the ’90s and one perfectly enjoyable Polish comedy don’t necessarily make for the most essential of collections; its bounty of features help earn that title. After you’ve recovered from the existential wreckage Kieślowski’s trilogy is likely to induce, dive into a trove worthy of its foundation — shorts films by the director, video essays by scholars, interviews, trailers, a documentary, commentary by Juliette Binoche (!), and a Criterion booklet that’s terrific even by their standards. A true run-into-your-burning-house-and-save-it title.

The Only Son / There Was a Father (Yasujiro Ozu)

In detailing the completion of his final Sight & Sound poll, Roger Ebert offered a kernel of wisdom that suits us well: “There must be an Ozu. It could be one of several. All of his films are universal.” If choosing two is something of a cheat, I like to think that minor concessions can nevertheless be made for a director who stands among the very best we’ve ever had. Tokyo Story and Late Spring are indeed great — well, most of us think so — but the in-effect sale means that now’s a great time to suggest you seek out this pairing. Finer-than-fine pictures on their own, sure, but that’s to say nothing of the insight offered into Ozu’s two central concerns, the family and the passing of time, and how they’re here used to build one of his most purely affecting films (Father) and one of his more formally audacious (Son). And if you’ve yet to situate yourself with his work, this should give one the advantage of starting without the burden of huge expectations.

A particular pairing of short film and feature that makes sense past the obvious recognition factor either has to its advantage. La Jetée and Sans Soleil, aside from being his two best-known works, are dominated by both the presence and very concept of images, a commonality that only further supports reasons for a high-definition presentation. (The feature is particularly demanding of as much; a low-resolution transfer might muddy its message as much as a bad sound mix could hurt the intent of a musician’s release.) How nice that even more work from Marker, video- and writing-wise, sneaks its way in. We’ll probably never have a fully comprehensive set celebrating such a massive catalog, but this should do a good job for neophytes and enthusiasts alike.

Salò, or the 120 Days of Sodom (Pier Paolo Pasolini)

Perhaps no film, Criterion or otherwise, shows a better example of the preceding reputation. It speaks immensely well for Salò that this is a denigration on more than one level. Hearing about these proceedings on a purely objective level — yes, they do this, and then they’re made to do that, and then you see them engaged in such an activity, and then… — doesn’t at all prepare you for the full experience because it undermines the weight of Pasolini’s accomplishment, transforming a masterpiece about the limits of human endurance and the endless bounds of our capacity for evil into some click-baiting slideshow. If a Blu-ray presentation seems perverse, consider its critiques of Fascism’s gilded, gaudy glory a perfect fit for 1080p. Just don’t get too close to the TV.

You’ve seen Rosemary’s Baby, Knife in the Water isn’t really so obscure, I can’t muster much of any enthusiasm for either Macbeth or Cul-De-Sac, and thus an inclusion of Polanski comes down to the selection of Tess. Fine by me, considering how magnificently he weaves both formal logic and narrative direction over the course of three wrenching hours — this must be his most deeply empathetic film; the dedication tagged to it would support that idea — and especially in light of the transfer that’s been accomplished here. (As someone who loves to observe various elements on Blu-ray discs, this fog-heavy film offers some very distinct pleasures.) No longer any sort of “minor” entry into the great director’s canon, thanks to this compilation.

Clèo from 5 to 7 is just as great as most will have you believe, which means it’s best to shower some praise on the lesser-seen titles. The Resnais-edited La Pointe Courte proves equally effective as both a stand-alone observation of human nature and an indication of where her career would head; the sustained effect of Le Bonheur, from first explosion of emotion-dictated color to last, made for an experience I neither could nor would want to be prepared for; and if Vagabond is not the best film in this set, it still evinces how well Varda can balance traditional narrative trappings with her more typical forms of character study. Some of her short films and brief documentaries round-out a fulfilling examination of a still-undervalued auteur.

All that Heaven Allows

Ace in the Hole

The Battle of Algiers

The Cranes are Flying

Do the Right Thing

Eclipse Series 33: Up All Night with Robert Downey Sr.

Eyes Without a Face

Mishima: A Life in Four Chapters

The Double Life of Veronique

The Wages of Fear

Identification of a Woman

Smiles of a Summer Night

A Film Trilogy by Ingmar Bergman

Scenes From a Marriage

Simon of the Desert

Beauty and the Beast

The Kid With a Bike

Night and the City

The Children Are Watching Us

Indiscretion of an American Wife

Master of the House

The Passion of Joan of Arc

Juliet of the Spirits

And the Ship Sails On

2 or 3 Things I Know About Her

The Man Who Knew Too Much

The First Films of Akira Kurosawa

The Testament of Dr. Mabuse

To Be or Not to Be

The Thief of Bagdad

The Life and Death of Colonel Blimp

I Know Where I’m Going!

The Rules of the Game

World on a Wire

The Life of Oharu

The Only Son/There Was a Father: Two Films by Yasujiro Ozu

Knife in the Water

The Flowers of St. Francis

The Taking of Power by Louis XIV

The Element of Crime

The Adventures of Antoine Doinel

The Criterion Collection sale at Barnes and Noble will conclude on December 1st.

What are your favorite Criterions? Which will you pick up?