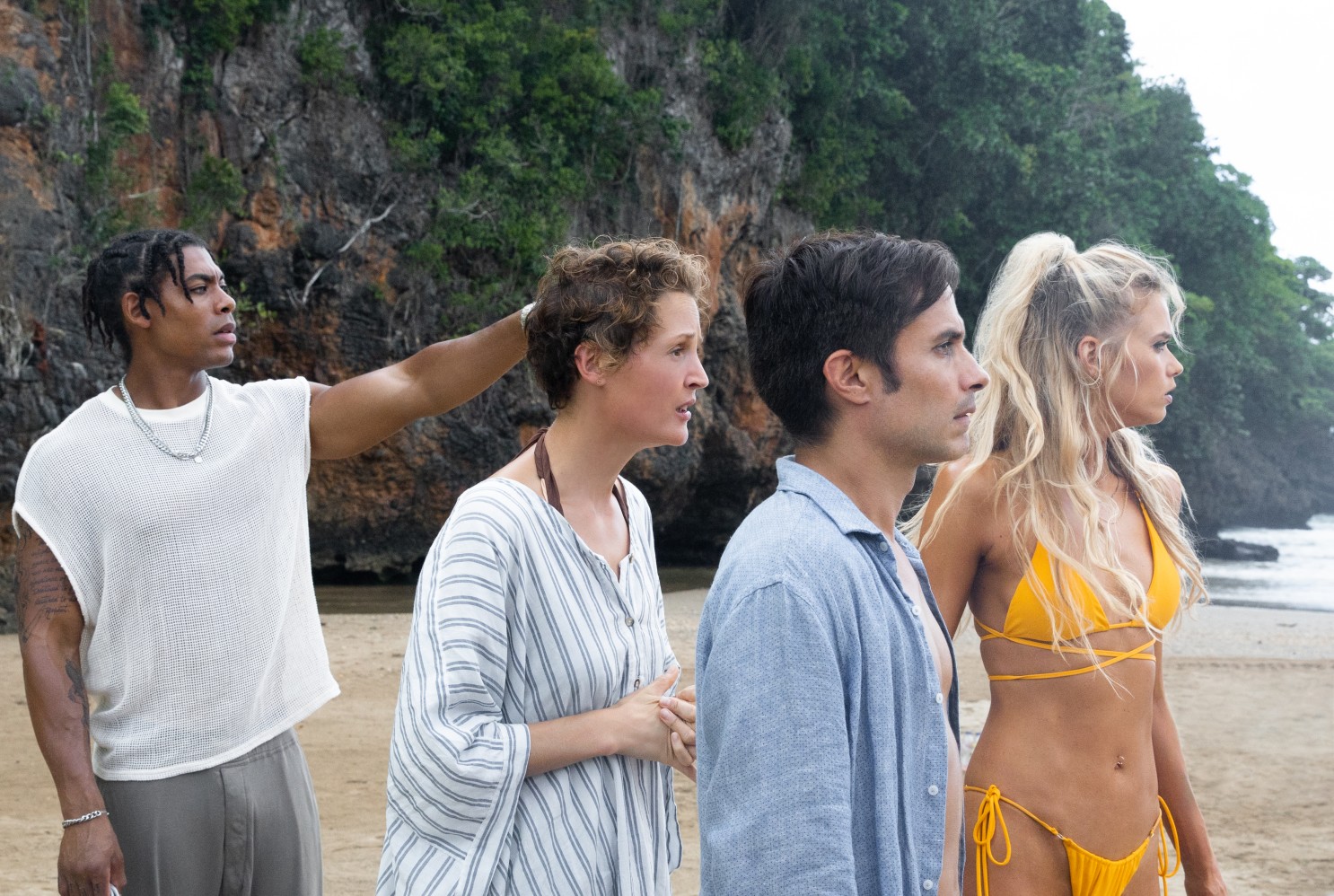 Old, the latest thriller from horror auteur M. Night Shyamalan, follows a family vacationing at a luxurious tropical resort. The parents (Gael García Bernal and Vicky Krieps) have loud fights over marital and medical troubles that their children bear but don’t understand. They take a day trip to a remote beach, an environment which has the mysterious effect of rapidly aging them—about the rate of a year per half-hour. In turn, the group of strangers succumb to the ravages of time, unable to leave the beach without blacking out.

But you would have gotten all this information from the trailer, which so thoroughly introduces the conceit—and shows us many of its more troubling repercussions—that even a pedestrian knowledge of medicine makes the outcomes easy to predict. (Not that I’m in the habit of guessing a twist, making me maybe an ideal if naive Shyamalan viewer.) That said, the film moves at such a breakneck pace that any viewer will have very little time to guess. Unlike other desert-island films, we often lose track of characters altogether, never knowing who could reappear when and in what mental or physical state they’ll be. Shyamalan’s disorienting camera work, with spinning dolly shots that turn away from the action, almost losing bits of dialogue as it passes, leaves no room to look ahead while we’re trying to catch up.

When filming was delayed by the pandemic, Shyamalan spent the interim brainstorming shots and setups with his director of photography Mike Gioulakis. And you can see this tinkering onscreen: canted angles, dizzying 360s, overheads, and two charmingly on-the-nose split-diopter shots featuring children’s toys. Some of this camera work is thrilling, offering more visual interest than we’ve come to expect from contemporary thrillers. Others—like a long shot where the camera is placed in the surf, water rising over the frame as waves roll in—feel a little wanky.

Old isn’t overworked or pretentious––it actually feels like a breath of fresh air. It doesn’t have the simmering dread of The Sixth Sense or The Village or the metaphorical weightiness of Unbreakable and Glass. It’s thematically and narratively straightforward, the reality-bending rules of this world so well-established outright that we aren’t expecting an earth-shattering twist. Instead Shyamalan gets to explore all the gruesome and sentimental effects of his concept. Most of these are played out on bodies, which age in ways both exotic (like a character whose mineral deficiency culminates in a scene I’m not likely to forget) and completely pedestrian.

Beyond horrors of what time does to the body, there’s what it does to our relationships. In the span of hours, parents are forced to confront their children’s painful passage through teendom and adulthood and to grapple with their loss of control over their offspring’s fates. And children learn that their parents don’t have all the answers––that they are fallible and ultimately powerless to protect them. These shifts are hard to accept at a normal pace but are given a heightened, almost transcendent meaning when they pass in the blink of an eye.

Despite the unrelenting terrors and tragedies, both embodied and existential, Old is a very fun, almost breezy experience. With the bulk of the film featuring a contained cast in a single location, it’s a pandemic-made project that doesn’t leave us feeling cheated. The scenery is lovely, the players are likable, the pace is brisk. It has the overall air of a filmmaker unburdened by pressures of seriousness, getting to stretch his legs and enjoy the view.