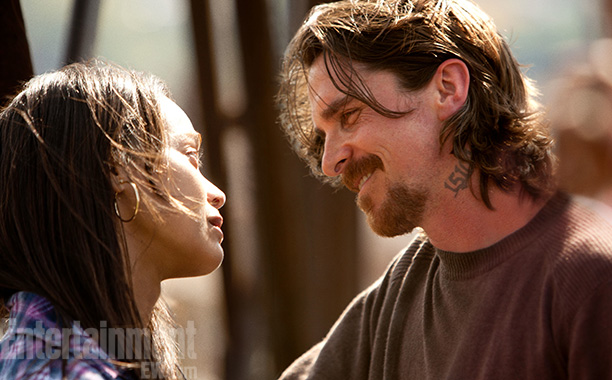 In his post-Batman career, Christian Bale has had a wealth of choices and thankfully, all of them thus far are projects we’re heavily anticipating. While it’s unclear, as usual, when we’ll ever see his two Terrence Malick-directed films, another pair are hitting theaters this year. Before he reteams with David O. Russell for American Hustle, Scott Cooper‘s Crazy Heart follow-up Out of the Furnace will be arriving.  We featured the very first images earlier this week and now a new batch have landed, along with a poster.

Coming from EW (in case you couldn’t tell by the obtrusive watermarks), above and below one can see Bale and Zoe Saldana hard at work with Cooper. We’ve also got a smaller still of Casey Affleck in action and the Bale-heavy official poster. Commenting on his lead character, Cooper says, “Through his faith and the support of his family and community and through his resolve, he emerges a stronger man, much like America has after coming through these last five or six difficult years.” Check out the images above and below for the film also starring Forest Whitaker, Willem Dafoe, Sam Shepard and Boyd Holbrook, and return for our trailer soon. Out of the Furnace opens on November 27th.