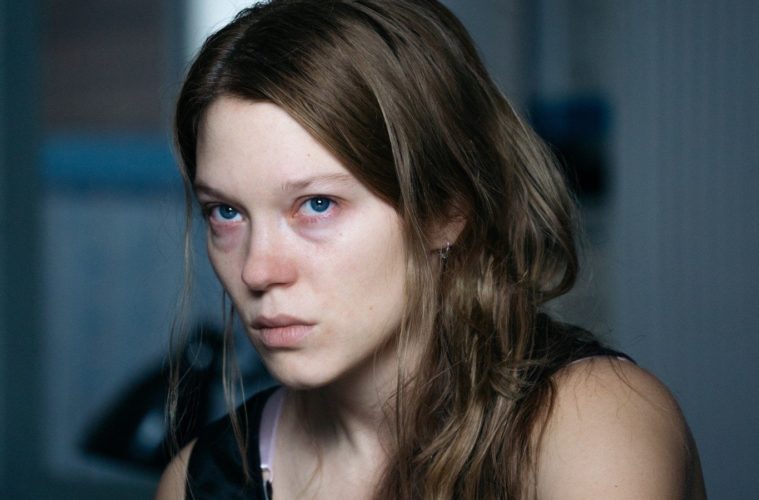 When a filmmaker is well-known for reiterating certain narratives or themes, perhaps even having a specific character reappear to embody such ideas, unfamiliar territory can be noteworthy. Such is the case with the typically self-reflexive Arnaud Desplechin and his unusual new film, Oh Mercy!, a rather uniquely French take on the police procedural–historically, something of a storytelling sandbox for the country’s prevailing auteurs, e.g. Henri-Georges Clouzot (Le Corbeau) or Maurice Pialat (Police). Well-defined characteristics leave plenty of appeal in straying from convention in order to craft salient stories that examine France’s law enforcement institutions within a tried-and-true framework. Unfortunately, Desplechin’s psychoanalytic interpretation of the procedural format is unbearably ponderous, an attempt at a formal deconstruction neither convincing nor consistently engaging.

In the French city of Roubaix, one of the country’s poorest communes and home to Desplechin himself, life is difficult and residents frequently struggle with poverty and crime bred by deindustrialization. Passing a parked car on fire in a residential neighborhood, Police Commissaire Yacoub Daoub (Roschdy Zem) calls in the incident over his dispatch, his calm tone and hesitation to check things out suggesting he doesn’t expect an investigation would amount to much—a simple, deft metaphor for the irresolute nature of the various crimes that will crop up. Desplechin’s film examines Roubaix’s crime by turns as a handheld quasi-document and a rigorous formalist narrative, a testament to the ability of frequent collaborator Irina Lubtchansky, who finds an elegant middle ground between the moodily lit interior chambers and exterior nightlife, shooting with an added sense of immediacy through the use of vérité camerawork that reinforces visceral onscreen tension. Desplechin and Lubtchansky nevertheless run dry on engaging set-ups, and though the pattern growing redundant might be by design—the repetition of the routine in aggregate—Oh Mercy! lacks the resolve to follow through on any of this potential subtext.

Daoub and his team at the central precinct–including redhead Lieutenant Louis Cotterel (Antoine Reinartz), whose diary entries and notes to his father narrate at key moments–respond to crimes of varying degrees of priority. From a serial sexual predator terrorizing the city at night to an unkempt walk-in whose dubious claims of being attacked by stereotypically described Arabs are quickly deduced and shrewdly ignored, the first act can be a very literal representation of the investigative process and the closest this film comes to feeling like the source of its inspiration, Mosco Boucault’s 2008 French TV documentary Roubaix, commissariat central. This aptly reflects the original French title, Roubaix, une lumière (Roubaix, a light)–befittingly poetic compared to Oh Mercy! which makes all this sound more like a screwball comedy in the vein of Preston Sturges instead of a serious look at systemic social issues in modern-day France. As that might already imply, it is, tonally, a mess. Desplechin’s acerbic humor is largely absent, surfacing only in moments of light levity. Other than those select moments, rhia is a dreary affair, solemnly passing judgement on the lives of the impoverished and marginalized—a smug, holier-than-thou attitude present throughout.

The second and third acts winnow focus on one particular case: an arson in a slum eventually leading to the discovery of an elderly woman robbed and murdered in her home just nearby. Two of the eyewitnesses and ultimately prime suspects are steely-eyed Claude (an unusually dowdy Léa Seydoux) and her volatile girlfriend, Marie (Sara Forestier, similarly playing against type). Seydoux and Forestier’s characters have a tumultuous relationship, put under further duress once they’re in custody: at one moment one of them is intent on giving the other up, the next they’re doubling back to protect them by covering up with a contradictory testimony. It’s a unique dynamic played flatly, belying Desplechin’s aims to cut through all the red tape and examine up-close the psychology of criminals driven to breaking the law because of overwhelming poverty. Curiously, the police are given introspection only on their own terms, never having their morals or sense of right and wrong challenged. In the end, this comes across as crass self-assurance on the part of the police, drastically complicating tone in ways the film is unable to handle. This is most apparent in Daoub being characterized as a firm-but-mindful authority, framed as something of a surrogate paternal or mentor figure to the younger Lieutenant Cotterel, sharing his enthusiasm for horse-racing but self-admittedly refrains from betting. By this characterization, why does he get to pass judgement on the lives of Claude and Marie? It’s evident in a scene where he cocksurely presumes what Claude’s life was like before she ended up with Marie, treated as a moment of insight and compassion despite obvious overtones. It’s jarring, and not in a way that adds depth to these characters; it flattens them.

Oh Mercy! isn’t as bold of an experiment as its premise might suggest, coming from its illustrious director’s pedigree. Failing to find any meaningful insight into his hometown’s real economic disparity, the film comes across as an arrogant proclamation of how it’s tough for those both sides of the law, even though the police inhabit the same well-furnished upper-class establishments as Desplechin’s bourgeois characters in his metafictional efforts, e.g. A Christmas Tale and Ismael’s Ghosts, except without an iota of self-awareness those works possess. Desplechin’s clumsy attempt at weaving an large-scale tapestry of true crime in Roubaix is relentlessly dull: a self-congratulatory misfire that does more harm than good.