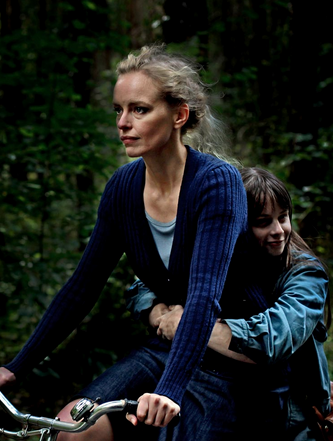 What’s so greatly appealing about Christian Petzold‘s Barbara is that, for a good chunk of its 105-minute runtime, the film douses itself in an atmosphere of restrained mysteriousness, as if to suggest the possibility that layers upon layers will be peeled back if we only remain attentive and patient. In particular, Nina Hoss‘s lead performance — as the title character, an intelligent, mature-looking doctor relegated to work in a deserted village after attempting to flee the German Democratic Republic of 1980 — seems to be an exercise of almost pictorial passivity, hinting at a second gear that we’re sure is going to be unleashed in due time.

But that’s merely the film’s stylistic spell, thanks to Petzold‘s proudly unobtrusive camerawork and evocative, autumn-flavored period detail. From Barbara’s rust-colored favorite sweater to the amber beauty of the interiors, Barbara consistently strings us along with a tempered command, and the film, I think, will therefore likely test the attention span of a certain number of viewers. But there’s no shortage of pleasure in sticking around here, because the more concretely the film becomes about Barbara’s struggles between two worlds — and the sugar-sweet love story that will impact her decision — the more strikingly personal the story becomes for the viewer. The East Germany hospital Barbara winds up in at the film’s start is, like the town surrounding it, quiet and secluded. The chief physician there is a bearded man named André (Ronald Zehrfeld), and while he’s a nice-looking, sincerely well-meaning gentleman — a lot like Barbara herself, really, except for the gentleman part — his soft, father-like flirtations towards Barbara, such as the gesture of waking her up from a nap with a warm cup of coffee or sending someone to her apartment to fix her out-of-tune piano, appear to strike Barbara as over-eager favors. He does things for her that she doesn’t show any sign of needing, and that makes her uncomfortable.

The reason for this, we learn, is not that she finds André intolerable, but that she’s maintaining a secretive affair on the side, an entirely separate life she’s carefully planning for. This subplot involves Jörg (Mark Waschke), Barbara’s handsome lover who is orchestrating for her another shot at escape — this time to West Germany, with him at her side. Their meet-ups are located in isolated places, like a roadside forest where one of Jörg’s acquaintances stands guard while the two make love amongst the trees. With Stasi officers (Rainer Bock, most frequently) keeping an eye on her from the very beginning, Barbara must remain careful to cover her getaway-seeking tracks.

Meanwhile, the arrival of two severely inflicted patients — Stella (Jasna Fritzi Bauer) and Mario (Jannik Schümann) — further complicate not only the workplace dynamic between Barbara and André, but the title character’s own daunting task of having to decide whether or not to go through with the escape. As she reads Adventures of Huckleberry Finn to Stella and gains more knowledge of Mario’s fragile backstory, she’s suddenly provided with a surplus of reasons to remain in East Germany and foster a happily sedate lifestyle.

Petzold has recently made Yella and Jerichow, both of which starred Hoss, and Barbara works to advance that director-actress collaboration to intriguingly fresh heights. His first period piece to date, Barbara proves the growingly respected German filmmaker uncannily capable at transposing his character’s intimate struggles with those of his setting at large. And yet, while the historical nuances are aplenty, it’s more satisfying on a first viewing to simply bask in the film’s purity as an uncommonly old-fashioned tale of romance, with two likeable, well-matched people fighting with their surroundings and each other before admitting that the only true answer was right in front of them all along.

As sure-handed as Petzold‘s direction is, though, the film would be nothing without the performances. Hoss has been reaping most of the critical benefits, as she very well should be, but it’d be a mistake not to mention Zehrfeld‘s co-starring work, because the chord he strikes — lonely and tender, looking for affection — is so crucial in pointing us towards Hoss’s own thoughts, which, because of her tension-filled legal status, are often repressed within a veneer of self-conscious blankness. Scene after scene, we watch as Hoss‘s Barbara quietly quarrels with herself, and when she finally allows for a moment of exhalation, it turns out to be the exact thing we ourselves have been waiting for all along.

Barbara plays at the New York Film Festival in early October, and will have a limited theatrical release beginning in December.