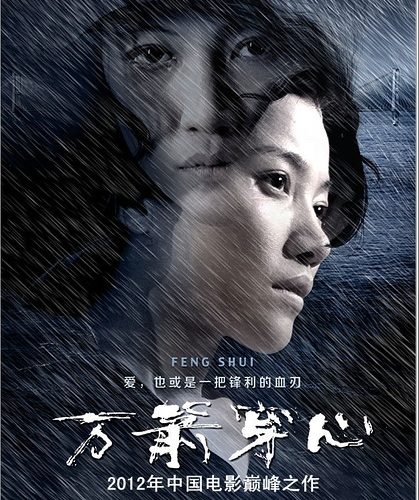 The opening minutes of Wang Jing‘s Feng Shui outline a difficult protagonist. Her name is Li Baoli, and, as played by the Beijing-born actress Yan Bingyan, she’s nearly insufferable in these first scenes, a cauldron of hysteria determined to kill every speck of positivity in the room. Her meek husband, Ma Xuewu (Jiao Gang), has just been promoted at his factory job, allowing the family to move into a better neighborhood. As beneficial as this might be for them in the long-term, though, a demanding, heat-soaked move never did anything to calm a person’s nerves: everything from the movers’ request for higher wages (because of the narrowness of the nearby alley) to her husband’s attempts at kindness (he offers the workers a free cigarette, much to his wife’s dismay) sets Baoli off. At one point, in a moment of welcome frankness, one of the movers tells Baoli to “chill out a little.”

Feng Shui takes place in 1990s Wuhan, a major hub that grew out of three former cities, including Hankou, which is what the characters still call their place of residence. This puts the movie in direct dialogue with the Chinese economy’s rapid growth during the decade, a historical context that helps us understand Baoli’s high-wired aggressiveness. (She herself, it should be noted, is a working woman.) Her relationship with her son, Xiaobao (Wang Tiange), is almost like a financial transaction: when they move into the new home, her first order of business is to tell young Xiaobao that he’ll finally have his own room, giving him the privacy he’ll need to become a top-tier student in school. Xiaobao, quiet and doting, rarely says a word to his mother: he just nods and does as he’s told, understanding that any other response would likely enrage her.

There’s a pressing question that informs these beginning sequences: why does Xuewu continue to withstand Baoli’s relentless verbal assaults? He’s the one that earns most of the money, after all, and his son loves him much more than he loves his mother. We get a sort-of answer to this question when Xuewu, one night before bed, tells Baoli that he wants a divorce. Predictably, this sends Baoli into crisis-mode, as her game all along has been power and supremacy: for Xuewu to ask for a divorce is to suddenly undermine everything she thought she had under control. Baoli confides her worries in her best friend (Zhao Qian), herself a married woman in a skirmish (her much-wealthier husband, whom we never see, is conducting his affairs in their own home). There’s a nice detail, too, when Baoli mentions that Xuewu doesn’t want anything in return for the divorce: while money and material stability may mean everything to someone like Baoli, her husband clearly desires genuine companionship above all else.

After requesting the divorce, Xuewu routinely arrives home late at night, telling Baoli that he’s been working overtime. In truth, he’s been indulging in an affection he has for a married woman (Wang Moxi). This is something Baoli begins to suspect, and she decides to follow him home from work one evening. Sure enough, she observes Xuewu taking his new girlfriend to a hotel for a quick tryst, and, in a cruel, bitter gesture, Baoli calls the police, telling them that prostitution is being conducted at the hotel, and then giving the dispatcher the precise room number of her husband and his mistress. The subsequent scenes, in which a regretful Xuewu returns to the family, are some of Yan’s best and most revealing: look at the way she revels in her restored authority, asserting her dominance over her husband once again. She’s a tough, ruthless character.

Director Wang Jing, who has a reputation for crafting delicate social dramas (this is the first film I’ve seen from him), adopts a gentle handheld style for this story that only occasionally feels a bit too jittery. For the most part, Feng Shui is actor-driven, with Wang deferring to the emotional investment of his performers. But there are times when his work with cinematographer Liu Younian attains an unassuming resonance: sporadic establishing shots of the city and of the family’s housing complex effectively connect the domestic drama to a larger societal context, and there are even times when, working in the interior of the home, the compositions successfully exploit physical structures (walls, chairs, tables) to reflect the emotional tensions running through the house. A scene involving Xuewu’s mother (He Minglan), who is forced to move in with her son when she loses her home, is a strong example of this: Baoli immediately takes Xuewu into an adjacent room to scold him, and we sense that the man’s mother can hear the argument through the walls.

A little over the halfway mark, Feng Shui employs an audacious ten-years-later time-jump, not entirely unlike the one Derek Cianfrance gave us earlier this year in The Place Beyond the Pines. At this juncture, Baoli is now working as a yoke-bearer, a physically taxing job that has her running through the streets of the city, jockeying for things to carry. Yan’s hair is slightly grayed here, and we can see the wear-and-tear on her face, too. (She even eats differently, like a starved animal.) But the job pays well-enough to support her family, and Xiaobao, now a teenager played by Li Xian, has made good on his academic promise: he’s the top student in his class, and Baoli is eager for him to make his way through a first-rate university so she can retire and rest on his sure-to-be-sumptuous salary. After all this time, Baoli still doesn’t know how to be a nurturing mother: her conversations with her son remain homework-related. The difference is, Xiaobao is finally old enough to call her out on her faults.

The movie’s title, taken from its source material (a novel by Fang Fang), is a reference to a superstitious phenomenon involving arrows that pierce the heart. In real-world terms, the superstition concerns complicated, intersecting physical structures, which are said to harbor bad-luck omens. This works its way into the film because the family’s new house is situated between a clash of crisscrossing roads. But Baoli insists that she doesn’t believe in such things, and the movie itself, save for a tongue-in-cheek moment at the end, mostly steers clear of pronouncing this spirituality in an explicit manner. Wang keeps his film in check, telling this unpredictable, absorbingly melodramatic story with a clear-eyed naturalism, and relying on the prowess of Yan’s unwavering leading performance.

Feng Shui will screen at Lincoln Center on Wednesday, July 3rd. Details can be found here.